When you think of a Hyena, what comes to mind? A scavenger, the creepy laugh that fills the bush after the sun has set? Or the bad guy from the Lion King? But, they are not the lazy creatures that documentaries and animated stories make them out to be. Yes, they steal food from other animals, but most of their meals come from their hunting.

Hyenas often hunt in groups and can take down a wide range of animals such as wildebeest, zebra and other species of antelope. Other snacks on the menu include snakes, birds, fish, lizards as well as insects. They sure make the most of their meals and eat every part of the animal, except the horns. Yes, that’s rights they even eat the bones. They are equipped with super-strong jaws and teeth that can crunch through anything.

The family of Hyaenidae has four members. The Spotted Hyena, the Brown Hyena, the Side-stripped Hyena and the Aardwolf. Of all the above species the Spotted Hyena is the biggest and most common. They are very social animals and live in a group called a clan that can reach up to 80. There’s a strict hierarchy where the females rank higher than the males and the clan is led by a powerful alpha female. The females are also about 25% bigger than the males!

A female Hyena can give birth to one or two cubs a year, which she will nurse in a den. When they grow up the males will often leave to join a different clan, but the females will stay with the same clan for the rest of their lives. Hyenas have an interesting behaviour known as siblicide between the youngsters. If the female has two of the same sex cubs, she will make them fight one another so one will kill the other to eliminate competition in the clan.

Hyenas are one of my favourite animals to see on Kapama Game Reserve. Recently we have been very lucky to come across 3 different den sites situated in the northwestern part of the reserve. One of the dens is not too far from Kapama River Lodge. One afternoon my guests and I were treated to one female Hyena lying outside the den. She eventually stood up to have a look around. Suddenly out came her curious cub which was about less than a month old. So small, still black and just as curious. But this little fella was not that brave yet and stood between moms two front legs as if to say “I’m brave but moms braver”.

A few weeks later I went back to the den site and found the mother laying outside the den again, as it was a very hot day. After a while, what I thought was only one cub, became two cubs. They were as playful as any very young animal that is learning and exploring its new environment. They were running up and down, all-around mom and of course all over mom’s head and body, as if she was a jungle gym. Now and again she would let them know they are overstepping their boundary. This playful act soon became a tackling game but because their legs are still short and unfamiliar, they would clumsily fall over a stick or even something as simple as grass.

It was such a treat to see a different side of Hyenas and my guests left with a changed sense of what these creatures are. 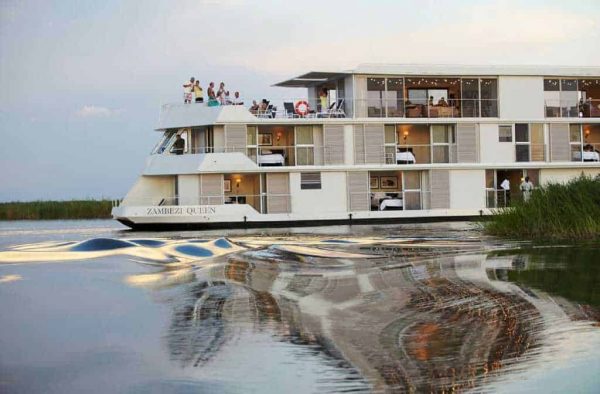