We left Buffalo Camp for the first game drive of the day with the bite of the chilly morning air hovering around us. With guests huddled under blankets and hot water bottles on their laps, our sunrise African adventure began.

We slowly made our way along the reserve road, admiring all the sights and sounds nature had in store for us that day. As we turned the one corner, there in front of us we saw a very young elephant calf.

This young elephant was only a couple of months old. It was being rather silly and excitedly ran between other members of the herd, then back to mom for some assurance and then back to the others once again. Up and down the whole time, keeping its poor mom busy. The young elephant also attempted to mimic what the other older elephants were doing with their trunks, with not much luck. This is school for baby elephants and how they learn, especially on what to do with their trunk.

When elephants are about 6 – 8 months old they start to learn how to use their trunks to eat and drink. It takes elephants some time to fully understand the ins an out of their trunk. It is no wonder it takes them long as:

While watching the little calf, we heard crashing of trees and breaking of branches. Two big young elephants bulls came crashing through the trees onto the road out of nowhere, pushing and shoving each other. It was not as serious as the sound of the commotion we herd. It was just boys being boys, testing each other’s strength, like an arm wrestling contest. They pushed their heads against each other using their tusks, to see who was stronger. I explained to my guests, that this particular behaviour was more playful than actual fighting, yet still an impressive demonstration of their strength.

The two elephant bulls continued going at each for a while, then stopped and joined the rest of the herd, who during this time had remained quite relaxed. Mom elephant was still keeping a watchful eye on her baby, as he still seemed adamant on causing his own little bit of havoc around him with his constant running.

It’s great to watch elephants in the wild carrying on with their normal behaviour, especially when every single elephant has its own personality, from a young calf doing silly things to teenagers being rebels and the older and wiser elephants taking everything in their stride. 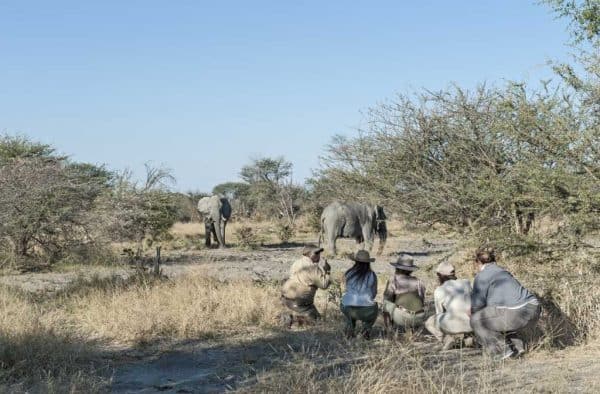