The world is a giant playground and if you don’t take the time to get out and explore, you’re missing out. From craggy mountain peaks, dusty deserts and psychedelic coral reefs, to vibey urban jungles, moody mist-filled rainforests and heart-shaped tropical islands, our glorious pale blue dot of a planet is Mother Nature’s masterpiece and an open invitation to explore.

One such invitation that I cannot recommend highly enough is the opportunity to hunker down, blissfully disconnect and truly get back to nature at Grootbos Private Nature Reserve in South Africa’s Western Cape. This verdant oasis sits within a lush floral kingdom, overlooking the whale-frequented waters of the Atlantic Ocean. Simply walking beneath the twisted tangle of moss-covered branches of its ancient milkwood forest is an invitation to press pause, to relax and to play.

Disconnect to connect
I decided to take a little solo roadtrip from my favourite city on earth, Cape Town, along the famed Cape Whale Coast to the romantic Cape Winelands. The aim of this last-minute adventure, quite simply, was to switch off. To disconnect from city life, put away the laptop and be present in my favourite, most picturesque, corner of the world.

An easy two-hour drive from the Mother City and I was entering the magical Cape floral kingdom, the first stop on my route. Grootbos, which means ‘large forest’, is a 2 500 hectare (6 100 acre) luxury eco-reserve that is home to an impressive 817 plant species (100 of which are endangered and 6 of which have been newly discovered), 118 bird species, 29 mammal species and 3 millennium-old milkwood forests.

Cocoon mode
My cocoon for the next few days was the simple, yet elegant and serene Grootbos Forest Lodge, (rightly) one of the National Geographic Unique Lodges of the World. I followed an enchanting wooded path under a thick canopy of milkwoods to my luxury suite. As I stepped in, I was immediately captivated by the sprawling 180°view of the lilac-flowered fynbos slopes leading down to the sandy white dunes and powder blue ocean below.

Modern, minimalist and oh-so tranquil, the undeniable stars of my suite were the panoramic view, wood-burning fireplace and enormous, standalone oval bathtub-with-a-view. Winter was just arriving in the southern hemisphere, which meant warm afternoon sunshine perfect for exploring this natural playground. But once the late afternoon chill set in, returning to the sheer cosiness of a blazing fireplace, piping hot bubblebath and quiet glass of South African pinotage was the ultimate spoil.

Sliding the floor-to-ceiling glass doors to my private veranda open to soak in the amber sunset, the air was a mixture of fresh sea breeze and fragrant fynbos. A scent, and a feeling, I wish I could have bottled up and taken home with me.

Choose your own adventure
Not only is Grootbos a thriving botanical playground, it is also a stone’s throw from ancient sea caves, undulating sand dunes, invigorating hikes and the whale and shark-frequented waters of Walker Bay. This was the open invitation to explore.

A wide range of daytime adventures awaits you. They are perfectly suited for the young and young at heart, the adrenaline junkie and the outdoor enthusiast, as well as those who simply want to unapologetically relax and eat/drink their way to happiness. No judgements here!

Choose from whale watching (seasonal) and shark cage diving, leisurely forest walks, horse-back riding, fat-biking on sand dunes, scenic flights, community visits, beach walks through ancient sea caves, and a flower safari. Or just indulge in the wholesome, organic food and local wines at the lodge and treat yourself to some you-time in the tranquil forest spa.

Nature’s therapy
My first full day was indulgently leisurely. Waking up to thick fog and a dark, moody thunderstorm, it was a morning for bottomless cappuccinos, a hearty breakfast (poached eggs topped with spicy baked bean chakalaka on warm, sourdough toast) and the hypnotic sound of raindrops pummelling the corrugated iron roof above. The very definition of relaxing.

I eased into the relaxed vibe with a pre-sunset walk through the dewy labyrinth of milkwood trunks and gnarled branches heavily laden with moss. My expert guide and botanist at heart, Byron Loubser, is as contagiously enthusiastic as they come. He’s a ray of sunshine, an encyclopaedia of knowledge and an eternal optimist that brings this picturesque floral kingdom to life. Ask for Byron by name, you won’t regret it.

It was an hour of good old fashioned forest therapy. We lingered through the earthy scent of damp soil and the dappled shade of 1 000 to 1 500 year-old white milkwood trees covered in shaggy old man’s beard. We stumbled upon mole burrows, tasted bitter nettle leaves, attempted to crush abandoned, calcified kidney snail shells (an impossible feat) and listened for the distinct call of the elusive Cape rain frog. The weighty, burdensome cloud of city life had officially lifted from my shoulders.

A window to the past
The heavens cleared up the next day and it was time to explore. It was a quick ten-minute drive through the sleepy seaside hollow of De Kelders, stopping en route to spot iridescent sunbirds basking on fiery orange aloes in full bloom. We arrived at the Klipgat caves, where a steep, winding staircase took us down the cliffside and onto the beach. We clambered over a few boulders and into another world.

A significant archaeological site, these ancient sea caves were excavated in 1969 and again in 1992. Evidence revealed these coastal caverns were formed millions of years ago and were inhabited by the Middle and Late Stone Age people. As we ambled through the cool, musty air of the rocky crevice, we observed fascinating 2 000 year-old relics, bones and shells that had been carefully salvaged from this bygone era. Even deeper excavations revealed stone tools and human remains from the Middle Stone Age civilisation dating back 70 000 years.

Like a window into a long-forgotten past, we marvelled at the perfectly framed and jagged view of the turquoise waves breaking at the cave’s entrance. The same exact view of crashing waves that would have been admired by ancient civilisations before us. And as we took silhouetted photographs at the gaping mouth of the cave, we also took a quiet moment to try and envision what cave life must have been like thousands upon thousands of years ago.

Where happiness blooms
I had never been on a flower safari before, but Byron’s enthusiasm had me intrigued. “The reserve drive is my absolute favourite thing to do,” he exclaimed with a hearty laugh. “In life!” he added. Well, I was sold, and off we trundled in an open safari vehicle into the colourful abyss of the flourishing Cape floral kingdom. And how fitting to be exploring this flower-filled playground on World Bee Day (there are 220 hives on the reserve and the lodge’s signature fynbos honey ice cream is a must-try) and, days later, the International Day for Biological Diversity.

There are six floral kingdoms in the world and the Cape floral kingdom is the smallest of them all. Although it is roughly the size of Portugal, this tiny patch of land remains one of the hottest biodiversity hotspots on earth and is home to 3% of the entire planet’s plant species.

“What makes this area so special is that approximately 9 600 plant species are literally crammed into the southwestern corner of the African continent.” Byron explained, “And out of those 9 600 species, 70% of them occur nowhere else on planet earth.” A rare and enchanting place indeed. And using a jeweller’s magnification loupe, Byron was able to share each flower’s unique story with us.

At first glance, the landscape appeared verdant and monochromatic. But as you delve deeper into the thick of it, there are surprising bursts of unexpected colour everywhere. Found nowhere else in the world, the soft pink clusters of Erica irregularis dominate the scene, but look deeper and you’ll spot the canary yellow Erica coccinea, the spiky hedgehog lily (Massonia depressa) and the unmistakable fuchsia pink proteas (or the limestone sugar bush), to name a few.

Our flower safari ended on not one, but two, high notes. First, we were lucky enough to spot the fresh spoor and claw marks of the shy Cape mountain leopard in a small patch of Afromontane forest. And second, Byron had gathered a tussie-mussie (a small floral bouquet) of some of the most therapeutic fynbos for each of us to take back to our suites for a hot and well-deserved aromatic bath in that gigantic tub.

This blossoming little patch of floral heaven is well worth a (lengthy) visit. From whale watching and caving, to flower hunting, fat-biking and tree-hugging, you’ll need a few days to truly appreciate this miraculous and biodiverse playground. I’d go back in a heartbeat. 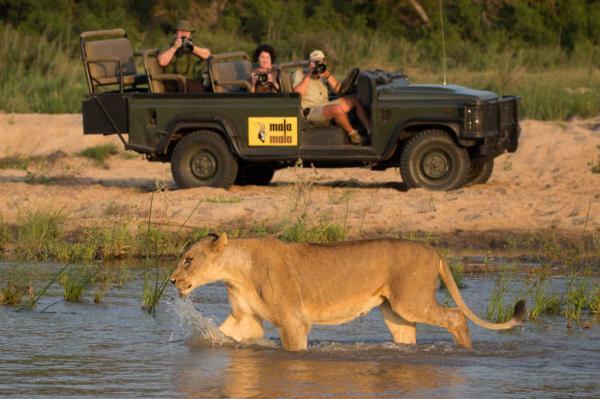