It’s that time of year again and the trees are just beginning to sprout leaves after having appeared dead for the last few months while in their dormant state. The first leaves always appear to be the greenest and the wildlife that feeds on them can’t get to the new shoots fast enough. This might be since most females have been pregnant and need to feed themselves as well as their growing fetus from the little available food. But now we are experiencing the spectacular change of seasons. Temperatures are already soring, the rain has teased us with a few sporadic showers and babies will soon be seen around almost every corner!

The long-awaited impala lambing season has finally begun. Six and a half months prior the impala rams gurgling roar filled the air, enticing the females into oestrus. As an end result we hope we will soon be seeing more and more adorable impala lambs bouncing about. Their legs are so long one wonders how they manage to stand and wobble about within 20 minutes of being born.

The mother licks the newborn clean of its placenta and in doing so also keeps it completely odourless, a way to keep predators at bay for the first day or two while the lamb and mother bond. Each ewe only has one lamb, but the short breeding season means that every able female should give birth within about 3 to 4 weeks. After mother and lamb re-joining the herd one starts to see small nurseries of impala lambs as they huddle together for warmth and safety while allowing the adults to wander a short distance to feed.

The birth of a baby giraffe is also quite an event. The baby falls from its mother’s womb, some eight feet above the ground onto its head. The mother giraffe will kiss the baby giraffe followed by kicking the young giraffe, again, and again until the trembling and tired baby, pushes up on its limbs and for the first time learns to stand on its feet.

Not too far away a mother warthog is lying in her burrow, dug out in an old termite mound, waiting for the first signs of daylight. This for her, also means that most of the nocturnal predators will soon become less active and lies about seeking shelter from the hot sun. Soon she will not be alone and snuggled up to her will be 6 piglets fighting for a teat. The 450 to 900 gram piglets will remain in the burrow for about a week or so before re-joining the sounder. They grow at an alarming rate and are often seen rooting bulbs at only a few weeks old although they will still suckle for around 6 months.

Unlike human infants, wild babies must adapt quickly to the dangers of life in the bush. Prey animals like the impala and warthog must be able to run within a few hours of being born and even predator cubs must learn quickly how to avoid danger. Generally, the prey animals will have their offspring in the spring or summer months at the arrival of the first rains. The predators however have shorter gestation periods and most can give birth throughout the year with the young being dependent on the mother’s hunting skills for roughly the first year and a half before the females mate again.

This year on Kapama some of our predators have timed their births with the birthing season of their prey and we have been fortunate to have had a plethora of lion cub sighting over the past month.

Two of our lion prides have recently grown with cubs being born in the last couple months. Lion cubs are often born as part of a litter of up to six siblings. They ‘re blind for the first week but can crawl within a few days, learning to walk at around 3 weeks. The first months are the most vulnerable and the mother hides her cubs in long grass or as in the case of our one pride, in a narrow dry riverbed while she goes hunting. The biggest threats during this time are starvation and infanticide which can occur when a new male takes over the pride and kills the offspring of his predecessor. Luckily for our new lion cubs, a coalition of three male lions have taken over huge parts of the reserved and together provide ample protection for their offspring.

Unlike lions which are social predators, leopards being solitary, tend to have fewer cubs and are far more reluctant to bring their cryptically coloured youngsters into the open for us to see. The determined guides of Kapama though, have had a keen eye and managed to spot multiple females each with their cubs. They range in ages with the youngest estimated to be only a few weeks old.

With all of these youngsters around on our reserve we can expect to have amazing sightings in the future, with the cute factor leaving all our guests in awe, and ahhhh!! as they learn what it takes to grow up in the wild. 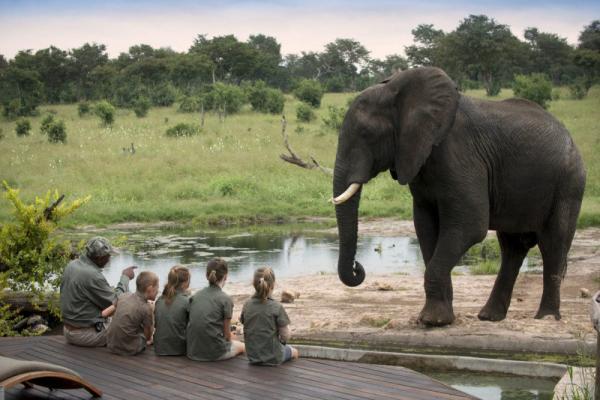