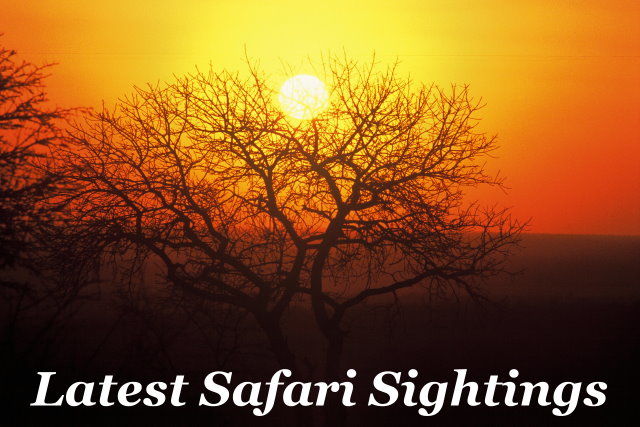 Weather has been hot and humid with cool mornings and strong winds in the late afternoons. Rainfall has been localised and heavy in patches, with a total of 66mm recorded in October. The Musiara Marsh has now dried up under the culvert and the Mara River water level is holding. Sunrise is at 6.20am and sunset is at 6.30pm. The short grass plains are still looking like a golf course, although the little rainfall has brought on a green flush in some areas of the East and West Musiara Plains, Topi Plains and the Olare Orok riverbed areas.

Game sightings have been good this month. From around the 12th of October, wildebeest were being seen in large herds in the Trans Mara and spread out across the Olpunyata Plains and also below the escarpment. By the end of the month those of the Serengeti herds had moved south and the resident herds had moved south-east with some crossing the Talek River and were heading towards the northern conservancies. Pockets of wildebeest will be seen in the Olare Orok and the north marsh areas as far as the short grass plains in the northern conservancy. Zebra are still in good numbers although will be scattered when rain falls between the Reserve and adjacent conservancies.

Elephant keep on crossing the Mara River at the BBC campsite river crossing and with a common breeding herd that frequent the camps. More hippo cows with calves are being seen since large pods are in all deep water areas of the Mara River. Since the rain, small herds of Eland have been seen near the marsh on the west side.

The two Cape buffalo herds are well spread out since mid month; the Bila Shaka breeding herd has latterly been habituating the north fan of Rhino Ridge and will also come down to the Bila Shaka river bed. When closing into the Marsh, the resident marsh lion pride will feed off them. Latterly older bull buffalo are now resident in the West marsh grasslands and can be seen creeping in closer to the camps – a few of these older bulls have since been taken down by the resident west marsh spotted hyena clan.

Hyena clans are large at present, with the west marsh clan consisting of over 80 animals – we have had a few sightings of hyenas mating this month although this phenomenon is not often seen.

Topi have started their calving season with good sightings on Topi Plains and Malima Tatu; many of the calves are prey to hyena and cheetah. Coke’s Hartebeest have also been seen with calves. Warthogs are still giving birth with an average of 4-5 piglets per sow and a gestation of five and a half months; the camp grounds are well stocked with warthogs and piglets. Thomson Gazelles are also being seen with plenty of young – female gazelles can have up to two young per year. For the first two weeks after giving birth, the mother hides the fawn in tall grass and returns twice daily to nurse it until it is old enough to join the herd. Impala breeding herds are also being seen with fawns.

A particularly large African Rock Python has been sighted frequently this month in and around the lower Silanga riverbed; on the 20th it had clearly eaten something large due to its extended torso and it was suggested to be that of a Thomson Gazelle since it was in a shallow part of the river bed. Unfortunately, we suspected that Spotted Hyena ate this particular python because we last saw it the evening of the 20th and by the early morning of the 21st, in the immediate vicinity we noticed many hyenas. When pythons have eaten such large prey they become lethargic and slow while they digest and are often easy prey for predators such as hyenas.

On the 19th a pair of jackals had killed and eaten a Thomson fawn. Black-backed Jackals have a varied diet and will eat what they catch; being very efficient, they do not give up quickly which drives this species ahead of other jackals. Black-backed Jackals also have pups of varying ages; a den of three pups can be seen on the east Topi Plains. Bat-eared foxes being chiefly an insectivore are also being seen more regularly; these little foxes are well dispersed within the open areas of the Mara grasslands, although less frequently seen than Black-backed Jackals.

Serval cats are being seen more often with a particular male, south of the Bila Shaka, that appears to be more habituated to vehicle movement than others. Masai Giraffe breeding herds move between habitats and male herds are often seen within the fringes of the riverine woodlands. On the 20th one young male was killed near the BBC campsite woodlands by a larger male while sparing; early the next morning a clan of over 50 spotted hyena had eaten up everything and by evening the bones had been devoured too. A few days later, a group of five male giraffe were seen looking over what was left of the carcass – they hovered over the stained blood remains for well over an hour – extraordinary behaviour that has been seldom seen. A large dark male frequents the camps and will be seen on a daily basis. European bee-eaters have been seen in flight and some sounds of them appear in large flocks. Large flocks of yellow throated sandgrouse can be seen and heard on the very short and dry plains.

Lioness Yaya and her two adult daughters can be seen within the southern Marsh and the lower Paradise Plains. One of her daughters, Pamoja, has two small cubs that are about two months old now. She has moved them out from the riverine woodland thicket to the croton hill south of the Bila Shaka crossing. They have all been hunting and feeding off Zebra and Topi.

Lioness Spot has two one-year-old sub adult cubs, a male and female, who are mostly seen with lioness Little Red. They are usually seen on the Bila shaka river bed. On the 22nd they had killed a young male buffalo close to the crossing point on the Bila shaka.

Lionesses Rembo, Kabibi, Dada and Kito and their five cubs (three cubs are one year old and two are 10-months-old), have been hunting mostly zebra and buffalo within the Bila Shaka, Northern Marsh and Southern Marsh areas. Towards the end of the month we spotted them with a zebra kill which they later had to abandon as around twenty hyena had surrounded them and the noises being made by the hyena could have possibly attracted more lion from a different pride which would have been a threat to their cubs.

The six males are split between the Marsh Pride and the Madomo/Ridge Pride lionesses. Bila shaka, Topi Plains and Rhino Ridge areas are best to see the movement of these males. A buffalo and her calf had become separated from the rest of their herd by hyena, who managed to eventually push the calf down into a pond. Marsh Pride male Chongo heard the commotion and took advantage of the easy kill, before eventually dragging it off into the thicket.

Saba, (also known as the Kaboso female leopard) has been seen frequently – she was seen on the 14th being mated by a large male on the south bank of the Olare Orok River. She has one cub and we all thought that this mating meant that she no longer had her offspring, but a few days later she appeared with the very healthy cub in close pursuit. The cub is estimated at two months old and was only received by the public in the first week of the month.

Romi the female leopard is again being seen in the riverine woodlands close to the old BBC campsite; she was also seen lying over a dead Warburgia tree in the evenings of the 15th, 16th and 19th of the month. The last offspring of Romi, a young male, was seen near the ‘Lake Nakuru’ woodlands stalking Impala late into the evening of the 21st; the Impala sensed the leopard’s advance and sidestepped into the air just as the leopard rushed forward.

The female leopard Bahati, of the Talek river area, is still being sighted with her two cubs that are estimated to be about nine months old now. She was seen on the 17th while coming down vertically from a Warburgia tree.

A large male leopard has been seen a few times near the Kaburu crossing point on the Mara River, this again is the same male that will hunt wildebeest during the months they are crossing. A large female leopard has been seen on the Ngiatiak side of the Double Crossing: on the 22nd she was seen feeding off the carcass of a wildebeest that was initially killed by lions and after just ten minutes of feeding, a lioness rushed out from a croton thicket to claim back her kill.

‘Tano Bora’, the five male cheetah coalition, is still being seen between the conservancies and the Reserve; on the 21st they were all seen together in the south-east of the Reserve and one of the males was seen mating with a lone female. They have been hunting yearling wildebeest and Topi. This is a very active coalition of five males.

Currently it’s the calving season of Thomson Gazelles and Topis; cheetah make the most of this period, often targeting the fawns which are of course an easier catch and therefore requires less of their energy. Our guides found Busara the female cheetah (daughter of Amani, born in 2016) enjoying her second Thomson Gazelle fawn in less than one hour.

Imani the female cheetah is now on her own as her three cubs have come of age. She has been seen less often this month and the last time we saw her was in the Motorogi Conservancy. Meanwhile, solitary males and females are still being seen; south of the Double Crossing and below Emartii Hill are good places to see a young male while the lone female was being seen on Paradise Plains and Rhino Ridge.

Our guided walks for October have been windy and cool with many overcast days. The grassland plains are short and dry with scattered plains game being seen – mostly Topi and Thomson gazelles. Pockets of male resident wildebeest would move in and around due to grass levels being short. We have seen many warthogs and young piglets – it’s surprising that the warthogs in the conservancies give birth a little later than those in the Reserve. Spotted hyenas have been active on the east and southern plains, attracted by the resident wildebeest that come and go. With the cool and dry conditions, many of the walks have lasted longer and our guests have enjoyed their bush breakfast slightly later in the morning.

Giraffe have been seen to move around the habitat of croton thickets and gardenia groves of which there are many between the two open plains. On the 16th two large male giraffes were seen neck fighting near the Gardenia grove riverbed.

We saw many active Jackal pairs hunting Thomson and Impala fawns in October. The female cheetah called Nalangu (with six young cubs estimated at three-months-old) has moved out from the Lemek Conservancy and into Mara North since the middle of the month.