February has been another great month at Sabyinyo – a fun month!

It’s been mostly sunny days, except for a those days where the weather proved a touch fickle. For a spell of 10 days in succession, clouds and rain, (sometimes heavy), descended on us between 10.30 am and 2.30 pm. What was nice though is that this downpour did not dampen the spirits of any of our guests, or even the spirits of the Gorillas. On the contrary, all of the guests this month returned from treks with smiles of sunshine and stories of pleasure in direct contrast to their wet gaiters and muddy boots. Well done to all the Gorillas for comprehensively defeating the Rain Gods, and for smiling down on our guests – good job!

This wet spell though did teach us one thing – not to listen to the manager! Every morning he would look skyward and say with conviction ‘I think it’s going to clear. The sun will lift these clouds for sure’. Obviously he needs some training in meteorology!

In February we particularly enjoyed the return of Nelis Wolmarans, previous manager of the Sabyinyo Silverback Lodge from 2011 to 2014. Nearly all of the staff of course knew Nelis very well – so his stay was not so much a visit, but a reunion. It was also a nice opportunity to congratulate Nelis for winning the Windland Smith Rice Wildlife Photographer Of The Year 2018, which he achieved with the most beautiful photo of a mother and baby Gorilla. Congratulations Nelis! Your stay was too short Nelis, but it was great to have you back!

We also very much enjoyed the company of Roger and Lisa Woods – they provided much excitement because they came and left by helicopter. Roger is Chief Flight Instructor for Leonardo Helicopters, and he was in Rwanda providing refresher training for Akagera Aviation Pilots. Thank you Roger for our private helicopter display over the Lodge – it was enjoyed by all! By the way, we will be sending you the bill for replacement of all the lodge umbrellas damaged in the fly-over!

And from the manager of the lodge, Michael Hughes, a very special thank you to the Jornvall family, especially to Ann-Margreth who opted out of a second Gorilla trek in order to go birding, and offered offered our manager her place on the hike. The result was one happy man!

We must also mention our guest Charlotte ‘the whirlwind’ Adams. Charlotte stayed with us for two nights in the beginning of February. It was a short stay but enough time to learn a little about SACOLA (Sabyinyo Community Livelihood Association – local community trust whom we are partnered with). Only a week later Charlotte had extended her African safari and returned to Sabyinyo Silverback Lodge for a mere 24 hours, specifically to donate cows to the community here. This generous gesture was very much appreciated by the community and on the back of this donation we are hoping to launch a scheme called ‘Charlotte’s Scheme’, where the recipients of the cows pledge to donate the first born female calf to another family – thereby creating a continuously perpetuating donation project that helps needy families. So, ‘thank you very much Charlotte – we look forward to seeing you again at the launch of your scheme in March’.

We officially started the ‘Turengerubuzima Sewing Centre Project’, one of our new SACOLA projects. Already 90 unmarried mothers have started ‘seamstress training’. On-the-job training is scheduled to take three months and in this period we are hoping to make contact with different organisations that require bulk purchase of uniforms. We at the lodge might be their first big customer!

February has also been a very exciting month for the staff of Sabyinyo too as we managed to finally pin down our staff Christmas outing to Lake Kivu! Many of our staff were of course working over Christmas and throughout January and so February was the first opportunity to take a break! We had a group of 33 which took a very enjoyable boat trip on the lake – it was interesting to see the Congo/Rwanda border from the water! Gisenye town on the Rwandan side is small, whereas Goma on the Congo side is a massive bustling metropolis!

The Christmas outing was followed by the wedding of Christine (daughter to Leonard Harerimana, our HR manager) to Pastrome. Weddings in Rwanda are all day affairs that start with settlement of the bride price. The bride price might already be set, but a comic mock-negotiation has to take place with arguments and innuendos going back and forth between the bride and groom’s families. Also this part of the ceremony requires the exchange of peacekeeping gifts – mainly wine!

Once the bride price is settled (3 cows in this instance), then the wedding ceremony takes place. For Christine and Pastrome it was a traditional Christian ceremony. After the couple are wed, there is traditional giving of gifts and the bride has to prove her expertise in hospitality – which she did with a big wedding banquet! The whole ceremony accompanied by lots of song and dance! What a great day it was. Congratulations to Christine and Pastrome and we wish you all the very best for your future together.

Our new staff block is approaching completion – it will be ready for occupancy in the 1st week of March. As you can imagine, all the staff are hugely excited – there will be lots more room and comfort for all!

In other news, Seb and Yo (two resident ravens who form part of the ‘cast of characters’ at the lodge, continue to grace us with their presence. These two are particularly clever birds – they know exactly how far, and with who, they can push their luck!

Our two Golden monkeys are still paying frequent visits to the property too. But they are difficult to see when the weather is poor. Like Humans they take shelter in the rain and then are difficult to find, but it is really nice to have them around.

Our family of sheep produced 5 new lambs, over five consecutive days, between 2nd to 6th February. The Sabyinyo flock now numbers 21! We use the sheep to help with our grass cutting, especially in the rougher outer reaches of the lodge grounds and where we have cleared land for reforestation.

And a final word … a BIG welcome to our new neighbours! In a very elaborate ceremony attended by Portia de Rossi (for Ellen DeGeneres), the Dian Fossey Gorilla Fund broke ground for their new research and education centre – which will be, quite literally on our doorstep! The build is planned to take two years and will consist of a research, an education, an information and a cultural centre. 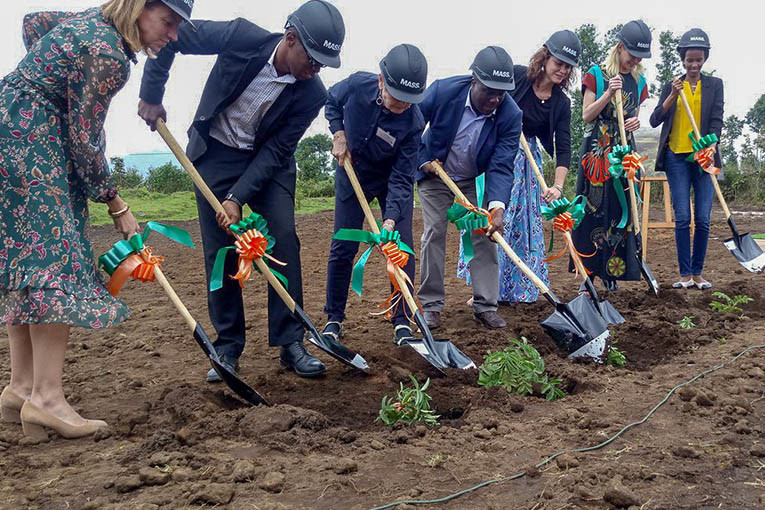 The new centre will be extremely beneficial for the community, tourism and related businesses in Rwanda and especially for the Gorillas. We are very much looking forward to their arrival and working alongside them. 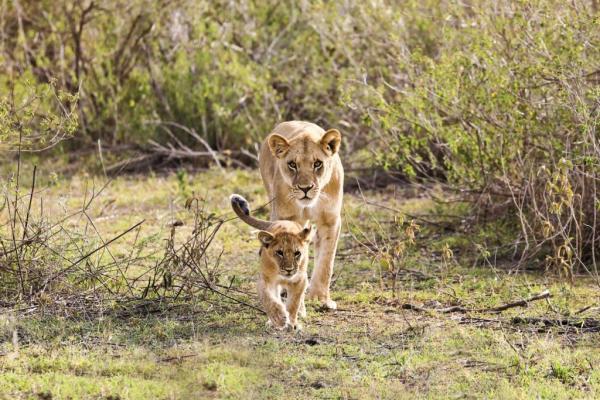