The Circle of Life

The Circle of Life

We were on our way back to Buffalo Camp for a scrumptious breakfast after some hard work from my tracker Foster trying to track down a female Leopard. Unfortunately, the elusive Leopard was true to her name and we had no luck in  finding her. We did however end up finding a lazy pride of Lions laying flat on their backs with bellies extending up in the air. It was very obvious that they had recently fed on something fairly large and were not too bothered by anything else that was happening around them.

On leaving the Lions I decided to back track their spoor to maybe get an idea of what they had been feasting on.  Sure enough we discovered a Giraffe carcass not too far from where we spotted the lazy Lions.  There was still some meat left over but judging by how full their bellies were, I think the Lions had had their fill. Whatever remained would be scavenged by keen predators like Hyena, black backed Jackals and Vultures that would consume every morsal.

The last kilometre before camp is often filled with general plains game like zebra, impala, blue wildebeest etc, being fairly open grassland with a few large Knobthorns and Marula trees. Today was exceptionally busy. As we slowly made our way home, I almost drove straight past a female Giraffe. You might not think this very exciting, but what I did not notice at first was that she had a small calf with her. As we got closer I noticed it was possibly the smallest calf I had ever seen.

It was so small in comparison to his mom it barely came to the height of her belly to suckle. What is interesting to note is, a small Giraffe is actually a very large baby compared to other young wildlife babies. In fact, it is the second-largest only behind the Elephant. They can be as tall as 2 metres and weigh a little over 100kgs.

I could see that some of the calf’s coat was quite wet. That is when I noticed It had a very long and still almost red umbilical cord. This baby must have been born not even an hour or two ago! It was so special to see such a young giraffe take some of his first steps and try to suckle from his mom. His long legs were so wobbly but he held his body up and stared at us with the most curious face. His osicones still lay back flat on his head. These are cartilage “horns” that will later ossify to the skull, hence why they are called osicones and not horns.

We wished the new mother luck as we moved on towards the lodge. My guests and I were amazed at the special scene we had just witnessed – The complete circle of life! Firstly, the energy we all felt seeing the Lions eating from the Giraffe carcass and then in the same day, just few km’s away, new life in the stumbling little baby Giraffe. 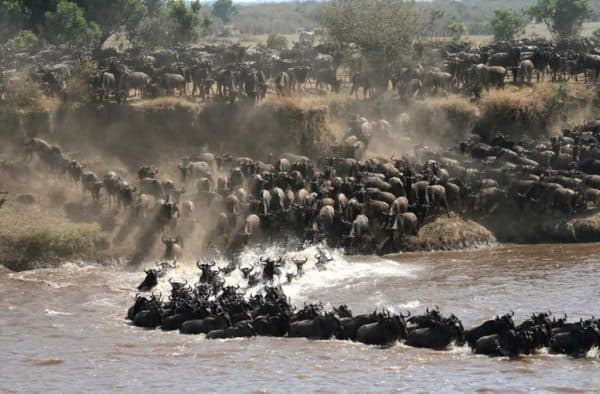