Three is not a Crowd

Three is not a Crowd

Leopards are solitary animals and very rarely seen together. The only times we will see them together is a female with her cubs or perhaps males fighting for territory or even mating leopards, but usually only the male and one female.

On one of our safari drives, we were extremely fortunate to experience something truly special. Not only did we come across the elusive leopard, but it was leopards mating. However, what was even more special about this sighting was the male was mating with two females at the same time.

The two females were mother and daughter, who had such a close relationship that they did not mind sharing, as the male alternated between the two. This particular male was one of our big territorial males.

As you could see from the video clip when a female is ready to mate she will indicate this by moving in front of the male by rubbing her backside in front of him. The mating itself only last about 5 to 10 seconds then the male will rest for 15 minutes and begin again. This will go on for the next 5 days. During this time, they can easily mate over 250 times.

The female leopard is not a seasonal breeding animal, she can mate and have cubs any time of the year. The gestation period of a female leopard is between 3 month and 100 days roughly. When the cubs are born, they weigh less than a kilogram and are blind at birth. Leopard cubs are extremely vulnerable in the wild and the mother will hide them very well in dense vegetation or in old burrows or termite mounds. At the age of 6 to 8 weeks old, they will start to follow the mother. They are weaned at 3 months old. Leopard cubs will remain with their mother until about 18 months when they can hunt and defend for themselves.

We were lucky to come across this memorable moment and we were able to get some great photos and videos. After a while, they start walking into the bush and decided rather to leave them in peace so that they can have their privacy.

The three leopards where up and down walking and then just go lay down the male will mate with the one rest for 15 minutes mate with the other female and then start walking again. We were so lucky to experience this, leopards can be difficult to find and can be very elusive but able to see 3 at the same time was just a magical moment for me and my guest that was on safari with me. 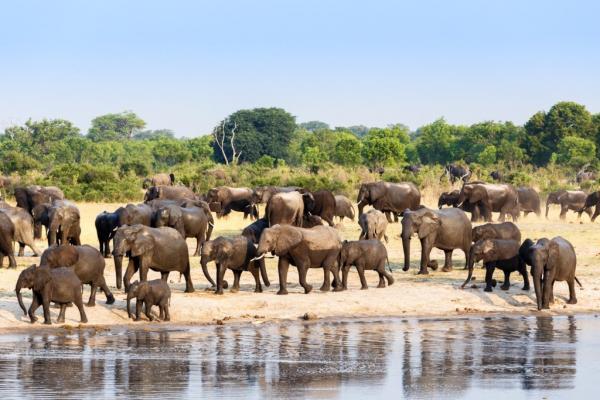