If you are coming to Africa and specifically Sabi Sabi Private Game Reserve and owls are your thing, then you are in luck. Here at Sabi Sabi we have the Verreaux’s Eagle-owl – the largest species of owl found in Africa and in fact, it is ranked as number three in the world. They are resident birds, meaning they will be here all year round.

Their feathers feature various shades of brown, with the darker colours being towards the ends of the feathers. The chest area and some of the face are a creamy white colour that blends in very well with the brown shades. They have a distinct feature of pink eyelids which no other species of owl has.

You will often see, or even first hear these beauties as dusk starts to set in, either with a high-pitched shrieking sound, or low deep grunting “hok-hok-hok” which can be audible for up to 5km. You might notice them being perched up on leafy trees as they start to come alive.

Being the largest owl in Africa, they need to consume a decent sized prey. They hunt mainly at night from an open perch, often on or near game trails or open riverbeds. Verreaux’s Eagle-owls will often hunt game birds and will crash in among foliage, causing the birds to panic or swoop down very quietly as owls leading edge of flight feathers are fringed, this result in silent flights. Next time you see an owl, listen for when it takes off. They have even been seen scavenging and eating carrion from carcasses.

Owls have large well developed tubular shaped eyes, held in place by a bony structure in the skull called sclerotic rings, therefore an owl cannot move its eyes in the sockets, this allows them to turn their heads around 270 degrees and they have a long flexible neck.

Verreaux’s Eagle-owls are monogamous and nest in very large twig platforms, sometimes stolen from other birds like Red-billed Buffalo Weavers and Hamerkops. These owls have a very long breeding season. The females will usually have two eggs, but sometimes only one. They will incubate them for about 28-39 days (starting from when the first egg is laid). She will be the one to incubate the eggs until ready and won’t leave the nest, it will then be up to her mate to ensure she has enough food brought to her for survival. The first egg to hatch is the one that is the most likely to offer offspring to survive. The parents will feed this one immediately and continually. If they have enough food available, they will feed both young. However, if food sources are scarce, the second one will get no food at all. Sadly, it will die.

I am a bit owl girl if I say so myself! Any owl fascinates me, and I think they are wonderful mysterious creatures to see. I remember I was once was sitting in a sighting along a dried up riverbed watching a male leopard cleaning himself – a sighting in itself right, until I heard this deep “hok” coming from the side of me. A Verreaux’s Eagle-owl had landed not even 15m away from us in clear sight in the setting sun and just continued to show us his pale pink eye lids (which always make them look sleepy, in my opinion), his deep voice and his stunning plumage. I remember just thinking to myself, how this sighting could get any better. Two magnificent species in one view. 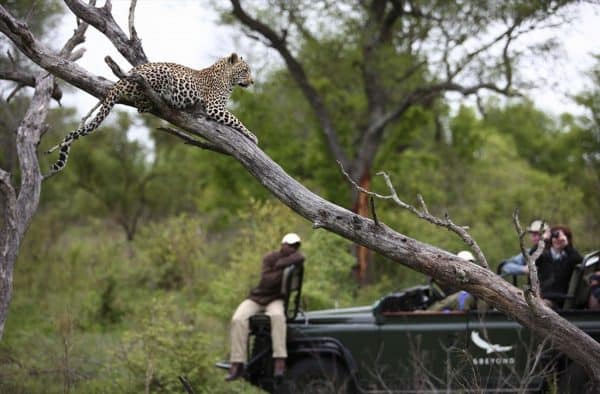