South Africa’s vast mineral wealth was discovered late in the 19th Century in the shape of rich gold deposits located in the Drakensberg escarpment, rising to the west of Sabi Sabi. The result was a pioneering time and the expedient transport of the treasured gold via a railway line from the Selati Goldfields to bordering Mozambique, cutting across the Sabi Sand Reserve. One of the most expensive railways ever built, the line was completed in 1912, but abandoned as a railway link for gold and utilised as a passenger line.

Traversing for trade routes are some of the earliest recorded safaris (originating from the Arabic word “safar”, meaning “to make a journey”) and an apt reference to the Selati railway trade route that resulted in recreational travel and the first signs of sustainable tourism in the area. A nine-day train tour through the Lowveld was introduced in the 1920’s where passengers could view game from the comfort of a railway coach, which could very well be regarded as some of the first African Safaris that took place.

Remnants of the old railbed can still be seen through parts of the Sabi Sand Reserve, but nowhere has the spirit of this era been captured more eloquently than in our five-star Selati Camp.

Africa during the great safari era, reminiscent of bygone romance, effortless elegance and opulence is embraced at Selati Camp. Old-world charm has forever been captured in the collector’s items and railway memorabilia incorporated throughout the camp.

Imaginative décor and artful furniture adorn the recently revamped suites and provide a sense of secluded comfort. Victorian-styled baths and al-fresco showers, for cooling off in the heat of the day, evoke a classic African Safari experience for the romantic at heart. Appreciating the silence from your suite’s private stone-walled outdoor space is the epitome of luxury.

Sturdy leather, elegant steel and high-quality Carrera marble combine the traditional and the contemporary, creating a strong visual impact in the suite.

A fusion of traditional and modern cuisine is served on wooden thatched decks framed with elegant muslin fabric drapes, in the open air boma around a roaring fire or in the seclusion of the traditional “farmhouse kitchen.”

The outside lounge and veranda area is layered in richness and diversity and is a space where one finds true relaxation, amidst upholstered wooden couches, armchairs and imported woven Malawian cane chairs. Interesting memorabilia which decorate this luxurious space is a combination of handmade basket lamps, books and textured cushions.

A newly installed circular deck has been masterfully crafted with weathered wooden slats that flow out to a cantilevered viewing platform with built-in seating, scatter cushions and tree stump tables – irresistibly tempting to just sit back and enjoy the restorative power of nature. It is here, under the shade of the ancient trees that line the Msuthlu riverbed where adventurous game viewers, newlyweds or those simply seeking solitude find a piece of utopia while watching animals continue their age-old trek of passing the nearby waterhole, ever eyeing the area for potential predators, while quenching their thirst in anticipation of the journey that lies ahead in the search for food and survival.

When planning where your next adventure will take you, consider that time spent at Selati Camp is equivalent to striking gold. 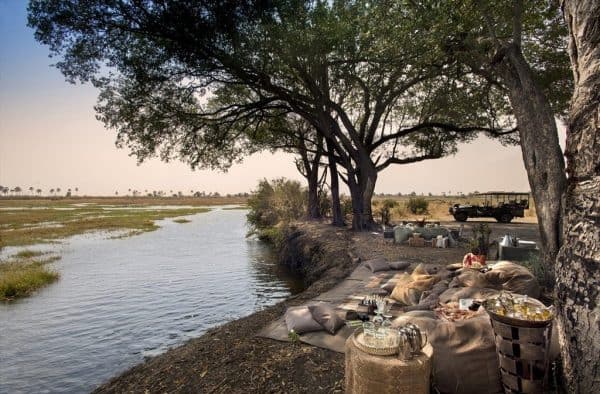