The White Rhino is the second largest land mammal on earth and here at Sabi Sabi, we are very fortunate to have regular sightings of these majestic creatures.

One of the most iconic identifying features on a rhino, is it immaculate horn. This horn is made up of keratin (the same substance as fingernails), growing 2-6 cm a year and will continue to grow throughout its life.

This horn is a weapon for defense, used to protect the young and fight off predators and well as used in bouts of combat with other males.

White rhino bulls are fiercely territorial and will guard their territory with great pride. Demarcating a territory means employing several visual and olfactory signals. They will use well used “rhino paths” to establish and reinforce boundaries. Whilst on patrol, they will urinate and will create visual scrap-markings with their feet that will in turn ensure that the scent is impregnated in the cracks off the foot. This method of territorial marking can also be achieved by kicking their dung. This creates an olfactory trail for other members to pick up on.

While rhinos have very poor eye-sight, they have an incredibly keen sense of smell and use both olfactory and sight for the purpose of communicating and detecting danger.

If and when you encounter rhinos on safari, you will notice that their ears are constantly rotating, independently in all directions to collect auditory clues. Their ears are conveniently placed on top of the long head to collect sounds.

Another fascinating phenomenon that you may see out on safari, would be rhinos spending time wallowing in shallow pools of water turned mud. This is the perfect way to help them deal with the excessive summer heat conditions. A good layer of caked mud not only helps them keep cool and prevents sunburn, but also helps prevent a build-up of parasites.

Keep your eyes open for a “CRASH” of rhinos, as it’s quite a sight to see more than one of these magnificent animals roaming the African plains. The females are fairly gregarious and will often be spotted with their latest calves and even the previous calf. If they don’t have calves, they are often spotted roaming around with other newly independent adults (both sexes).

Where there are many rhino, there will also be the very distinct sound of the Red-billed Oxpecker. These birds are almost always in attendance of rhino. Not only do they take care of ticks and parasites on the rhino’s body, providing them with a free grooming session but they also supply themselves with free meal. Keep your ears open as these “churring” birds are a great indication that a rhino may be in the area.

We are very lucky that Sabi Sabi plays host to a fantastic, thriving population of rhino. Here’s to hoping you get to lay eyes on them on your next safari.

One afternoon on drive we spotted two rhinos bumbling around in the distance. Both my tracker and I knew there was an opportunity that they would come for an afternoon drink. So we took a gamble and stopped at a watering hole nearby. We lost visual of them and our guests were wondering if we were actually going to lay eyes on the rhinos.

Just as my tracker Doc and I suspected, they came waddling up through a large crossing, straight to the watering hole.

The light was absolutely perfect, lighting these two majestic creatures in a tinge of pink. We sat in the quiet listening to the “Churr” of the Ox-Peckers and the slurping of the rhinos at the pan. There was no better way to view them. Our patience paid off. 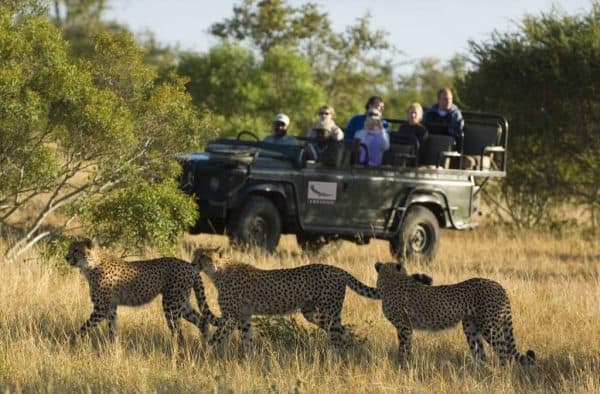