Take a trip on the most luxurious train in the world, Rovos Rail 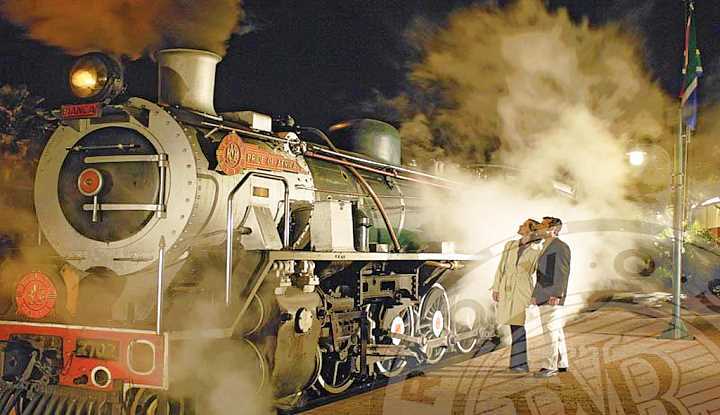 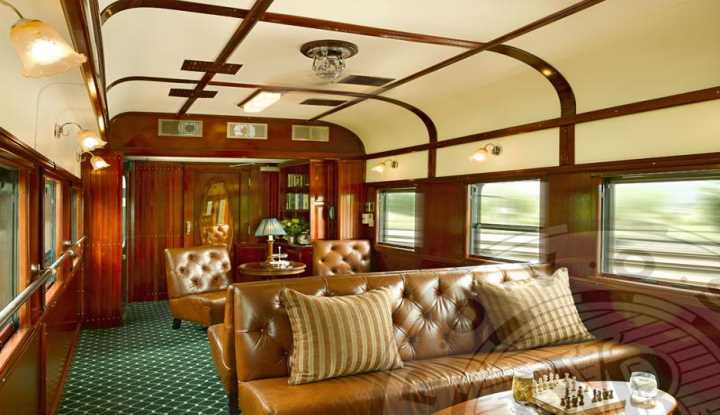 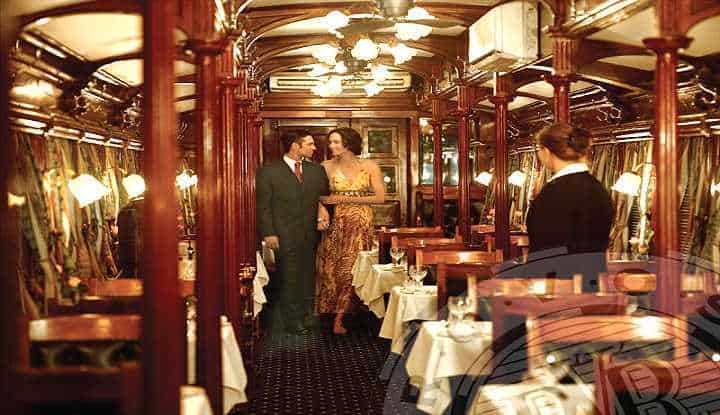 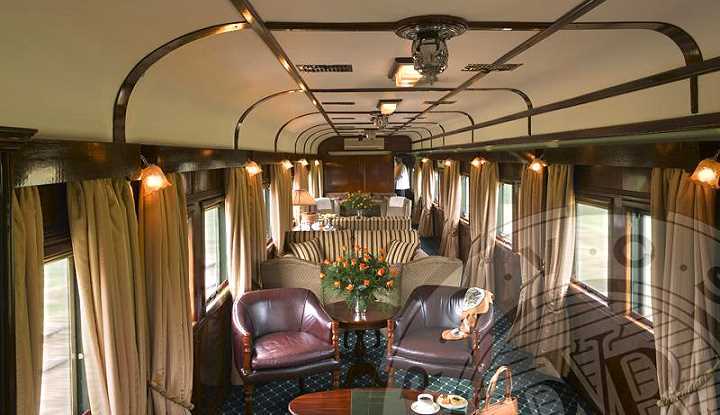 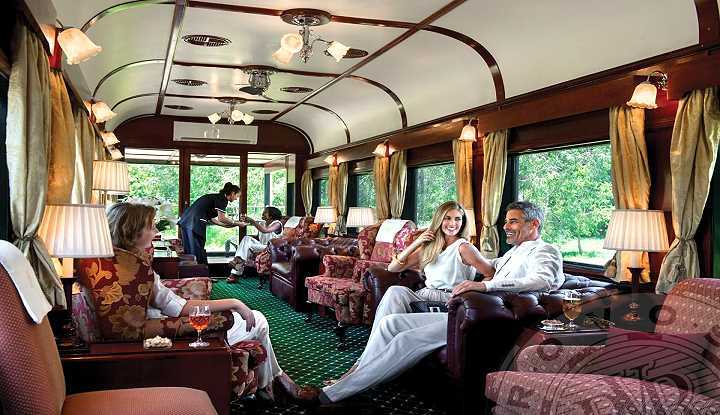 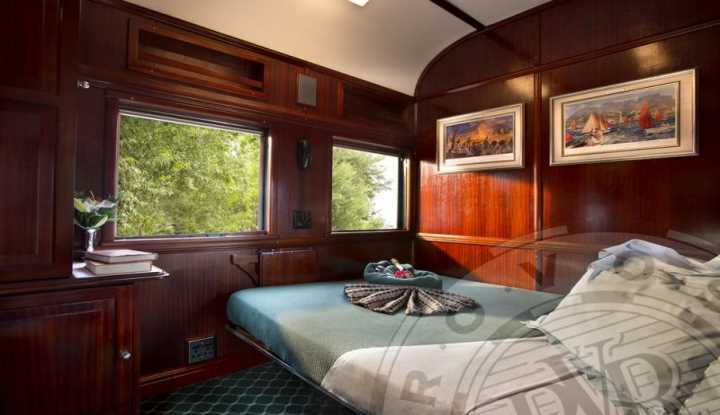 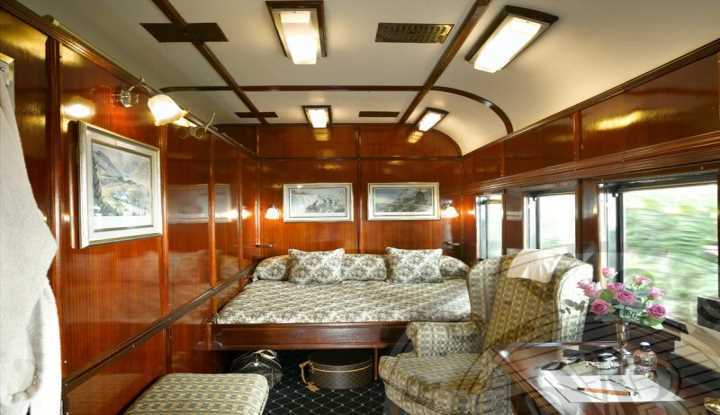 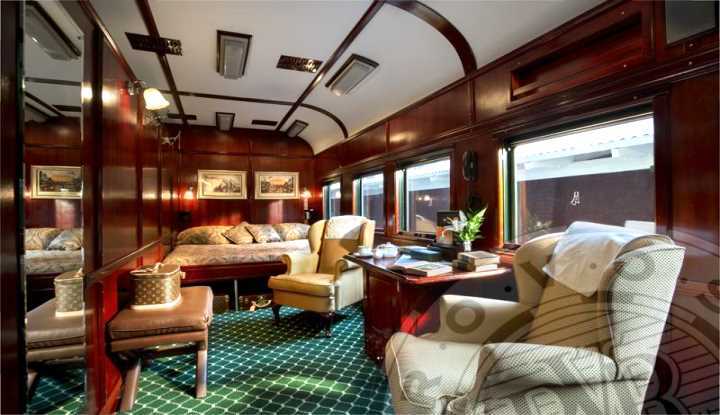 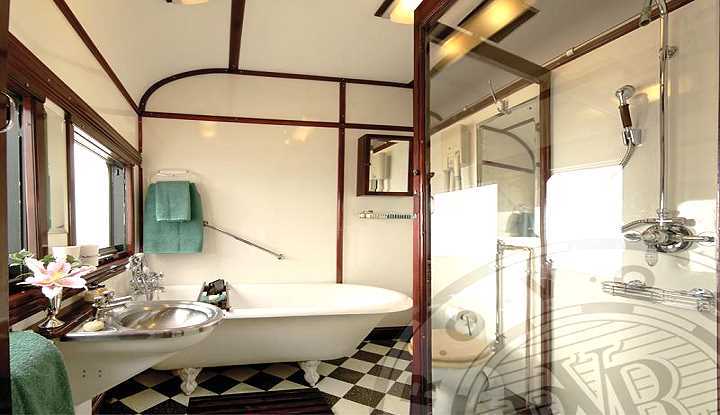 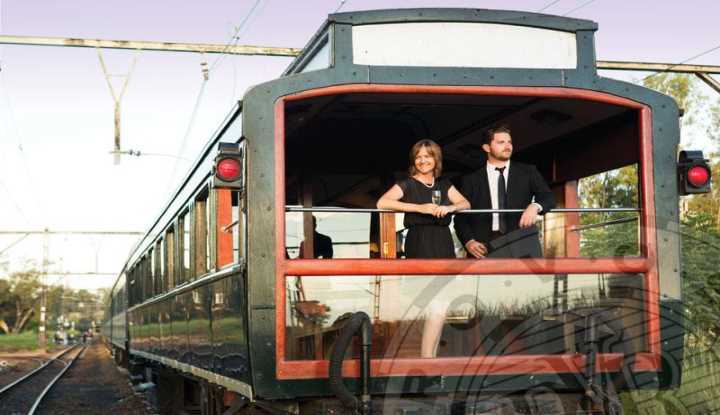 Travel to South Africa and take a trip on the most luxurious train in the world, Rovos Rail. Your romantic vacation through the heart of Southern Africa will begin or end at the headquarters of this private railway company, Capital Park Station and Locomotive Yard situated outside Pretoria. Rovos offers two beautifully rebuilt Classic trains, each carrying a maximum of 72 passengers who are accommodated in the most spacious and luxurious train suites in the world. The use of traditional furnishings and period décor ensure an atmosphere of elegance and grandeur in the Dining, Lounge and Observation cars.

Since its establishment in 1989, Rovos Rail has earned an international reputation for its truly world class travel experiences. Step aboard the wood panelled coaches – classics remodelled and refurbished to mint condition – and enjoy fine cuisine in five-star luxury as some of the most varied scenery imaginable unfolds beyond the windows. Recapture the romance and atmosphere of a bygone era, when privileged travellers experienced the magic and mystery of Africa in a relaxed and elegant fashion.

The trains – which may be hauled by steam, diesel or electric locomotives at various stages of the journey – carry a maximum of 72 passengers in 36 superbly appointed suites. Pride of place in the Rovos Rail stable goes to the historic and newly rebuilt Capital Park Station and locomotive yard, which is the heart and new headquarters of Rovos Rail.

Rovos Rail operates two classic 20-coach, 72 berth trains as well as a third 13-coach, 42-berth Edwardian train which is available year round for charter. Each one of these carriages, from kitchen cars to sleeper coaches and guards vans, has its own story. A few dating back to 1911 were constructed in Europe and shipped to South Africa in the first half of the last century. Some carriages have carried royalty, while others have ended up serving as restaurants or lying derelict and forgotten on sidings for decades. These coaches have been collected from the far corners of the country and are now cherished members of the Rovos Rail fleet of 75 carriages.

The coaches have been painstakingly rebuilt and the use fine wood panelling, traditional furnishings and period décor has ensured an atmosphere of elegance and grandeur. Exquisite pillared dining cars are a signature of the Rovos Rail trains. Each one has a proud history and has been meticulously restored from a derelict state. For example Dining Car No 195 ‘ Shangani ‘, which was built in 1924, was found parked in a siding in Alberton near Johannesburg before its acquisition by Rohan Vos in 1986. Three of the magnificent teak pillars had been removed and these were faithfully crafted, restoring the Victorian atmosphere.

Each of the trains has two 42-seater dining cars to accommodate the maximum complement of 72 passengers in total comfort at one sitting. Rovos Rail has a non-smoking Observation Car at the rear of the train, while the coach next to it contains a small smoking lounge. A unique feature of the Observation Cars is the enlarged windows and open-air balconies. At the centre of the train we have, when numbers dictate, a non-smoking Lounge Car, which houses the Gift Shop.

This 1 600-kilometre meander is a perfect illustration of South Africa as a world in one country. Travel the grasslands of the gold-rich Highveld to the haunting barrenness of the Great Karoo; trundle through the spectacular mountain ranges and scenic winelands of the Cape. Journey’s end is Cape Town, the Mother City of South Africa, cradled by the imposing bulk of Table Mountain, Devil’s Peak and Lion’s Head. Highlights of the north- and southbound routes include a visit to the historic village of Matjiesfontein; this authentic perfectly preserved Victorian Village – founded by Mr Logan as a refreshment stop in 1890 – also boasts an impressive museum on the platform. Another stop is made in Kimberley providing an opportunity to enjoy a city tour and a visit to the Diamond Mine Museum and the world’s largest man-made excavation, the Big Hole.
Available in reverse.

DAY 2
10h00 The train arrives in Kimberley. Passengers visit the Big Hole and the Diamond Mine Museum.
12h30 Depart Kimberley and proceed overnight via De Aar and Beaufort West to Matjiesfontein.

DAY 3
08h15 Enjoy a visit to the historic village of Matjiesfontein.
10h30 The train departs for Cape Town via Touws River and Worcester.
18h00 Arrive at Cape Town Station’s Platform 24.

This three-night adventure begins with the train’s departure from Rovos Rail Station in Pretoria. It then winds its way north through Warmbaths, so named for its mineral waters, and Nylstroom, christened by the Voortrekkers as the source of the Nile River as the town’s river happened to be north flowing. The train then passes the edge of the escarpment and crosses the Tropic of Capricorn en route to the border with Zimbabwe. After formalities at Beitbridge the next morning, the train travels to Bulawayo, second city of Zimbabwe, capital of Matabeleland and industrial capital of the country. The following day sees the train travelling along one of the world’s longest stretches of straight railway line – 114 kilometres – before traversing Hwange National Park, a rich and diverse wildlife sanctuary where animals can be spotted from the train and a game drive excursion is enjoyed. After a service stop at Thompsons Junction, the sojourn ends at the incomparable Victoria Falls on the mighty Zambezi River. The surrounding areas offer travellers many recreational opportunities including cruises, whitewater rafting as well as superb game viewing and photo safaris. Available in reverse. Depending upon railway capacity, this journey could be routed through Botswana.

DAY 2
Day at leisure. Breakfast, lunch and dinner are served as the train travels towards Bulawayo via Rutenga and Somabhula. Overnight stop on board at Mpopoma.

DAY 3
07h00 Breakfast is served as the train departs Mpopoma.
13h00 Enjoy lunch while travelling along the eastern edge of Hwange Park along one of Africa’s longest stretches of straight railway line – 114 kilometres.
15h00 Arrive at Kennedy Siding for a game drive at The Hide.
19h30 Dinner is served in the dining cars en route to Thompsons Junction for the overnight stop.

DAY 4
07h00 Breakfast is enjoyed while travelling towards the Zambezi River.
10h00 Arrive at journey’s end in Victoria Falls, Zimbabwe.

This three-day safari between Pretoria and Durban departs during the summer months and includes game drives, a battlefields tour with a world-class historian and a look at unusual African ceramics. Experience the Nambiti Conservancy – a Big Five private retreat set on 20 000 acres of malaria-free bushveld in KwaZulu-Natal. It has an incredible biodiversity including savannah, grasslands, thornveld and tall acacia trees. Situated on an expansive game farm, Spionkop Lodge – which adjoins an 11 000-acre nature reserve – is the perfect base for exploring the mountains, bush, birds and battlefields of the region. Ardmore Ceramics is a story about the Zulu people whose sense of rhythm, colour, dance and song, as well as the spirit of the African imagination, is exerting its influence on the other continents of the world. Visit this charming centre in the KwaZulu-Natal Midlands before travelling the Valley of a Thousand Hills to Durban. Available in reverse.

DAY 3
Breakfast is served as the train descends the escarpment en route to Lions River Station.
10h00 Visit the famous Ardmore Ceramics Gallery including an equestrian display and tea.
12h00 Depart for Durban. The train traverses the spectacular Valley of a Thousand Hills.
16h00 Arrive at journey’s end in Durban.

This nine-day 3 400-kilometre journey takes the train from the savannahs of the Highveld to the Atlantic in the west. Departing from Pretoria, the first stop is Kimberley, centre of one of the world’s famous diamond rushes where there is an opportunity to savour the 1870s atmosphere of the mine village. The train traverses the stark vistas of the Northern Cape to the Fish River Canyon – second in size to the Grand Canyon – and Garas Park with its Quiver Tree Forest and the Giant’s Playground. Guests continue across the untamed beauty of the Kalahari Desert to Namibia’s capital for a tour; Windhoek is a lively, cosmopolitan city with a strong German flavour. Then it’s a short flight to Sossusvlei, a stunning pan in the Namib Desert, for an overnight stay followed by a night in the game-rich Etosha National Park. On the last morning, the train travels the Namib to the perfectly preserved 19th-century German Hansa town of Swakopmund and Walvis Bay – an unforgettable end to a remarkable journey. Available in reverse.

DAY 7
09h30 Transfer to a lodge in the Etosha National Park for lunch, game drive and overnight.

PRICE PER PERSON SHARING includes: accommodation, meals and excursions as well as all beverages, incl. alcohol, while on board.
Single supplement +50% on all suites 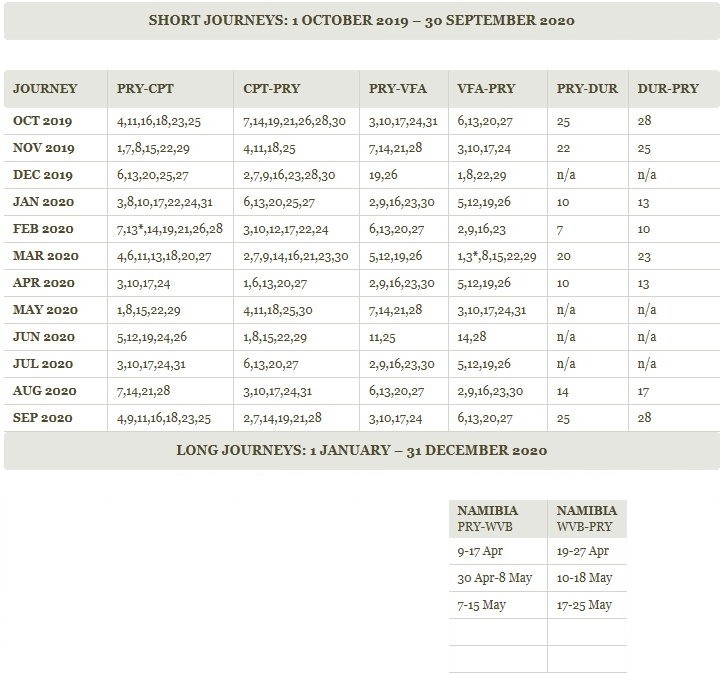 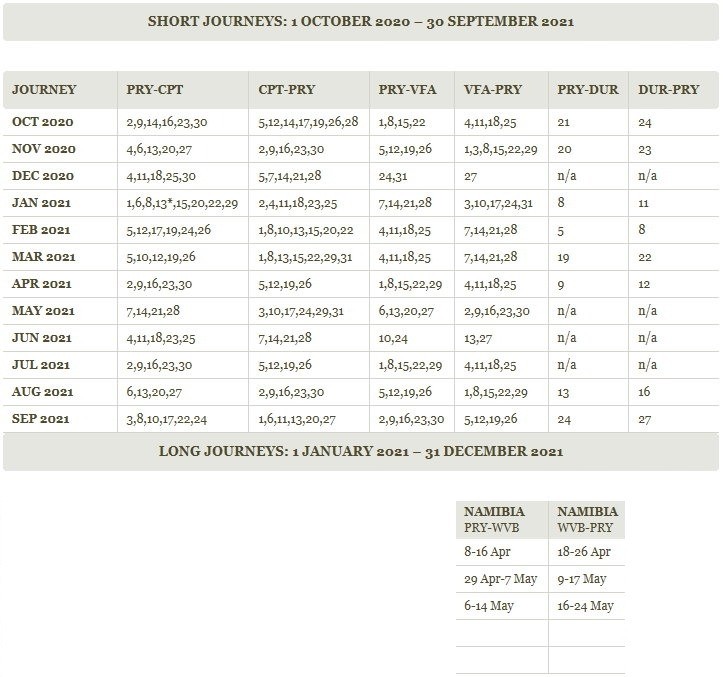