Namibia Safaris & Tours Tailormade for You

Namibia Safaris – Namibia offers a diverse range of highlights: Scenic beauty including the Skeleton Coast – untouched and untamed, this desolate and uninhabited landscape is home to the rare Brown Hyena and Desert Elephants, seal colonies and is the burial ground of many ships, the Kunene River – the source of one of Africa’s greatest waterfalls, the Ruacana; the splendour of abundant bird and wildlife; unusual geological formations including Fish River Canyon, Brandberg, Spitzkoppe and the unique star-shaped dune mountains at Sossusvlei; pristine wilderness including Etosha Pan – an oasis in the centre of a vast semi-desert region, the Namib Desert – the only desert that harbours elephant, rhino, lion and giraffe; the diverse and friendly nation – vibrant African cultures blended with the architecture and traditions of the Germans, British and South Africans; Adventure opportunities – from sand boarding, canoeing, white water rafting to hot air ballooning. 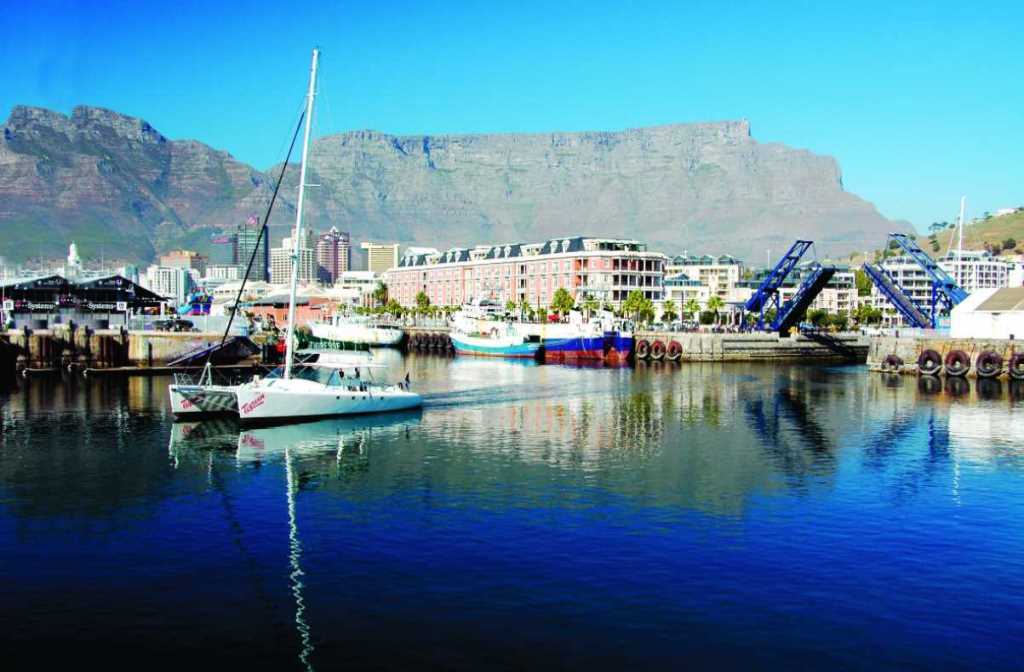 From Euros 3,795 per person sharing 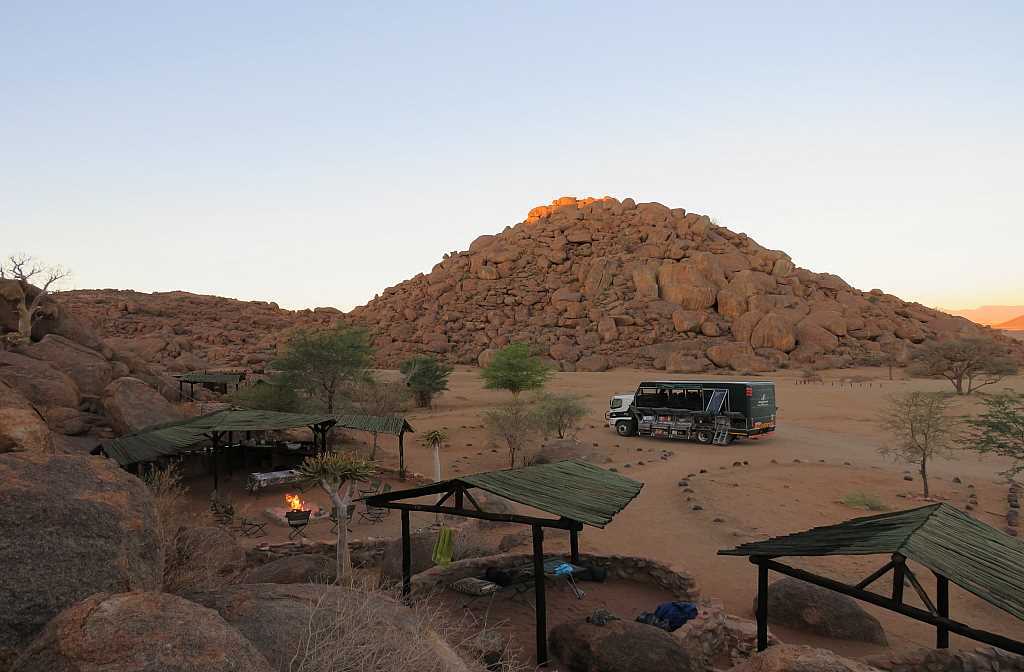 From Euros 2,495 per person sharing 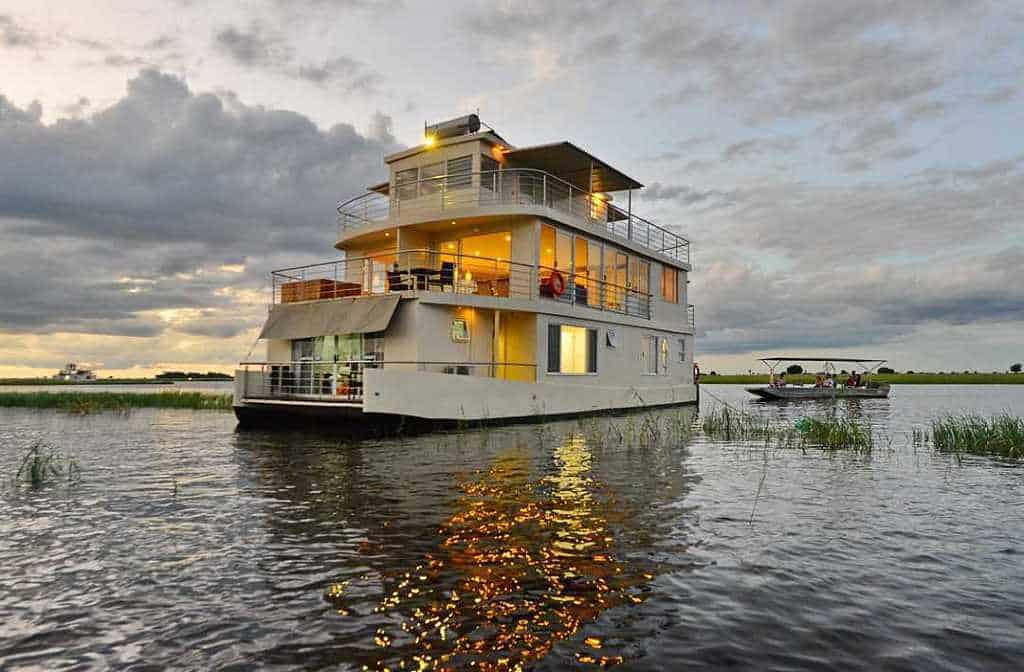 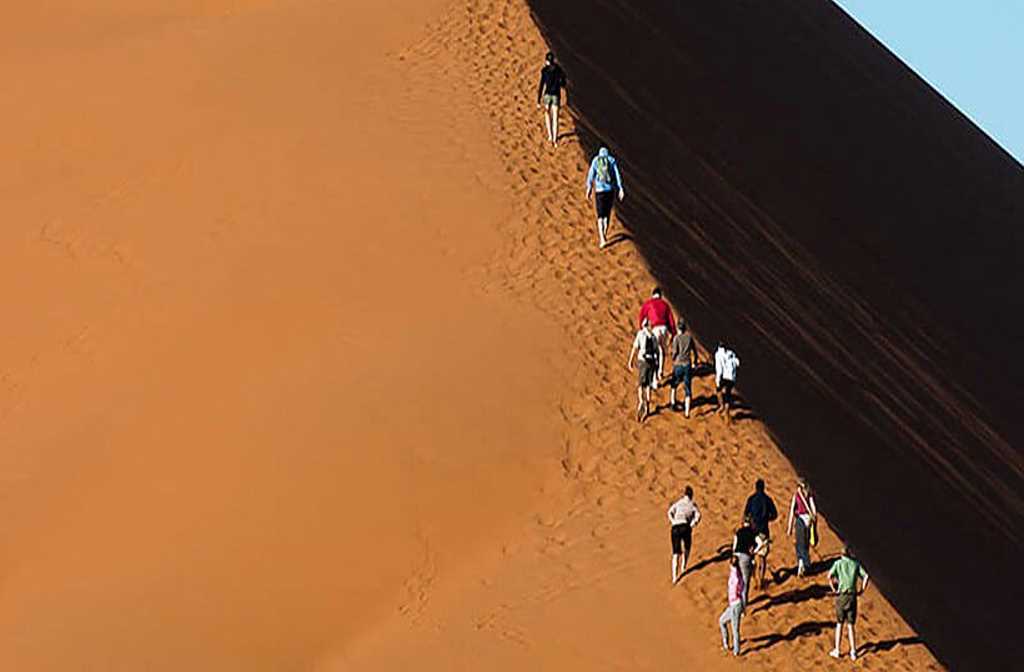 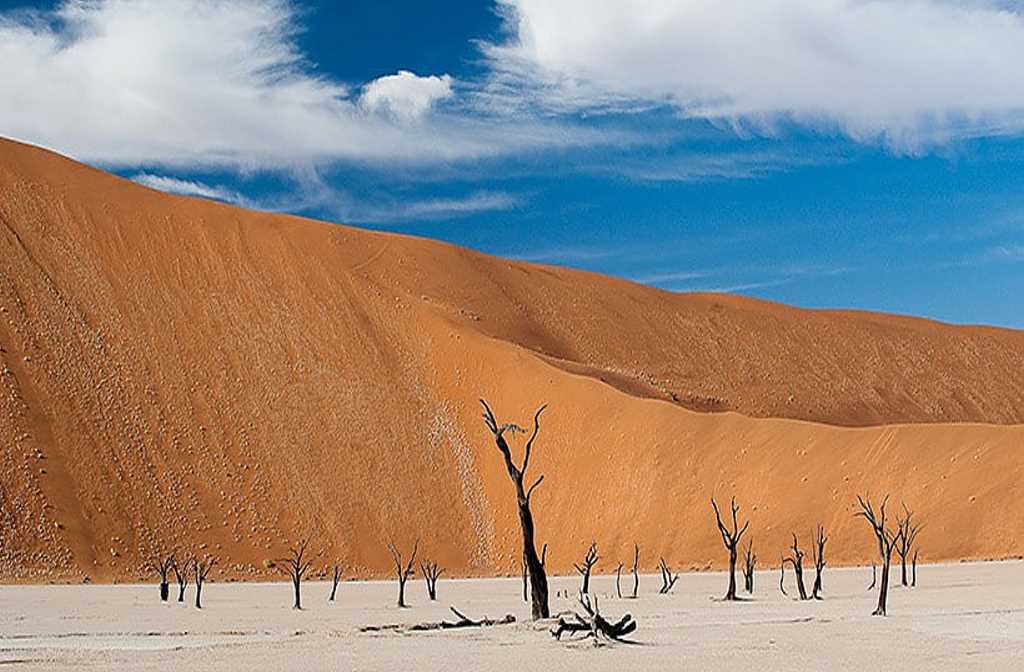 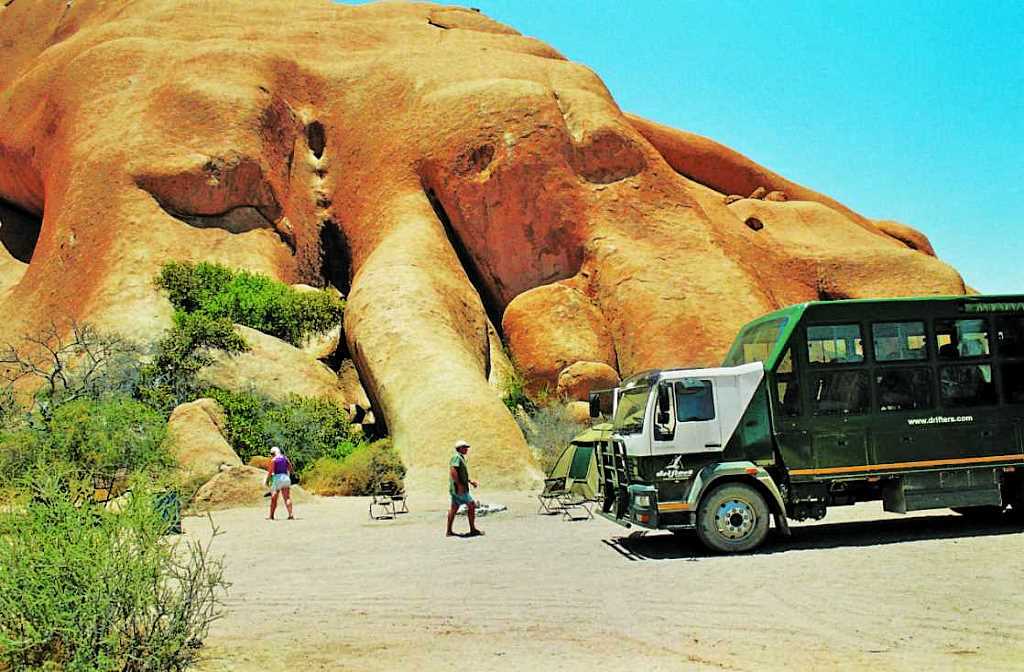 From Euros 3,075 per person sharing 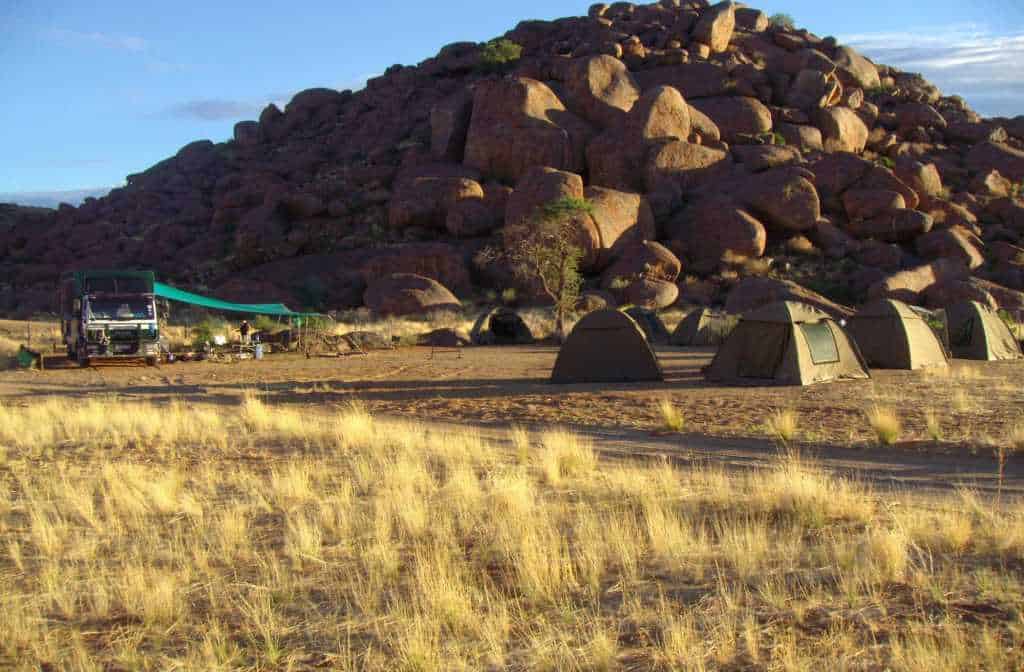 From Euros 1,895 per person sharing 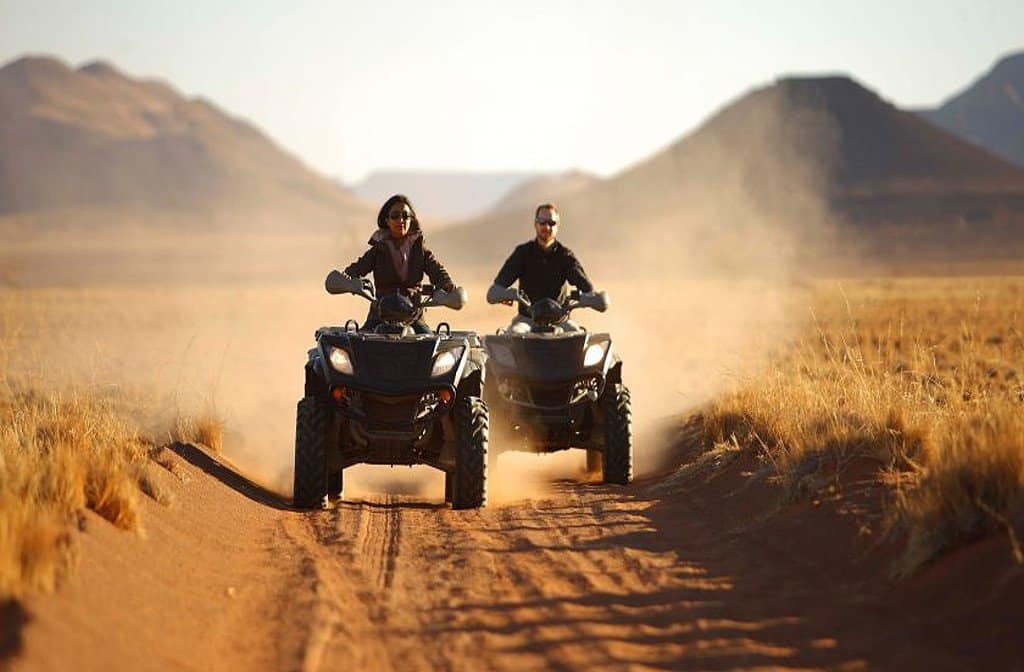 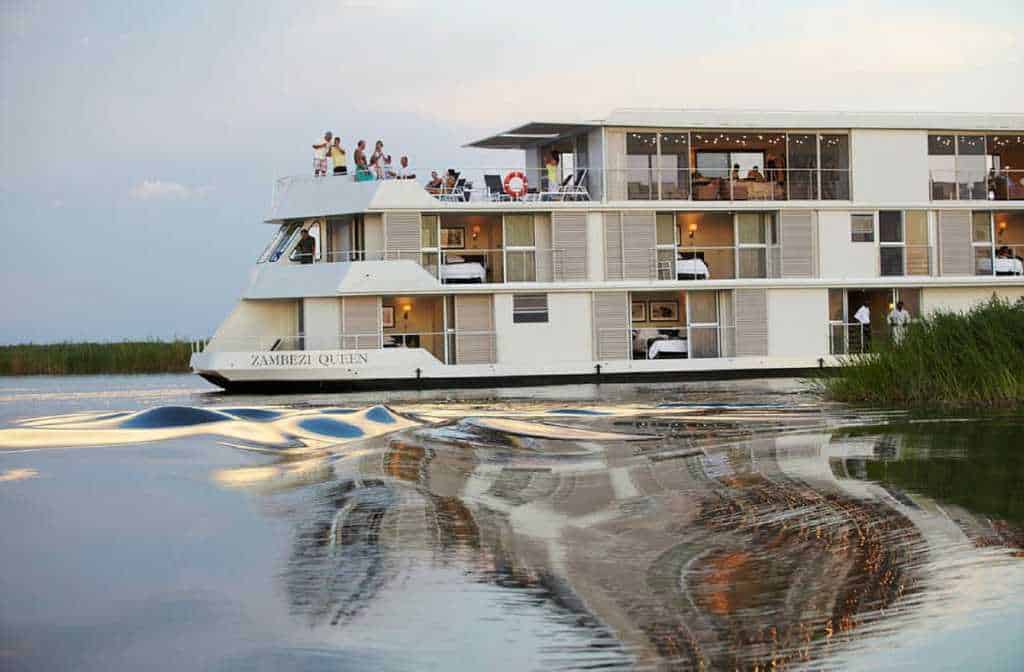 Etosha National Park is famed for it a huge saltpan covering some 120 km (75 miles) across and 55 km (31 miles) from north to south. Its edges give way to a surprising variety of vegetation types and – critically – a series of springs and waterholes that at attract a vast amount of wildlife.

Sossusvlei represents the classic view of the Namib Desert of an ocean of sand, ‘waves’ that are made of bright red sand and dark shadows. Known as the ‘Sand Sea,’ it is sandwiched between the Atlantic’s cold Benguela Current and a rocky mountain escarpment that runs parallel more than 100 kilometres (62 miles) inland.

The rugged, rocky landscape of Damaraland in north-west Namibia is characterised by valleys and dry riverbeds that carve their way through deep gorges and ancient geological features. These rivers are ribbon-like oases that push through the most desolate of terrains and attract wildlife.

Kunene (also known as Kaokoland) is one of the fourteen regions of Namibia and home to the Himba ethnic group. Compared to the rest of Namibia, it is relatively underdeveloped. This is due to the mountainous inaccessible geography and the dryness that significantly hinders agriculture.

Few attractions are as evocative and atmospheric as the haunting the Skeleton Coast. Situated on Namibia’s remote western coastline, it is named after the many ships that sank here over the past few centuries.

Weather and Best Time to go on Namibia Safaris

The cold Benguela current keeps the coast of the Namib Desert cool, damp and free of rain for most of the year, with a thick coastal fog. Inland, rain falls in summer. Summer temperatures are high while the altitude means that nights are cool. Winter nights can be fairly cold, but days are generally warm and pleasant.

Winter (May-September)
Temperatures in the interior range from 18C-25C during the day. Below freezing temperatures and ground frost are common at night.

Summer (October-April)
Average interior temperatures range from 20C-34C during the day. Temperatures above 40C are often recorded in the extreme north and south of the country. The coast influenced by the cold Benguela current, boasts a relatively stable range of 15C-25C. Heavy fog is fairly common at night.