Kalahari Plains Camp in the Kalahari

Kalahari Plains Camp is situated in a remote part of the diverse and productive Central Kalahari Game Reserve (CKGR) and offers some of the best summer wildlife viewing opportunities in Africa. Located in the Kalahari Desert biome in the central part of Botswana, this reserve is the largest conservation area in the country at 5 million hectares, making it one of the largest in the world. 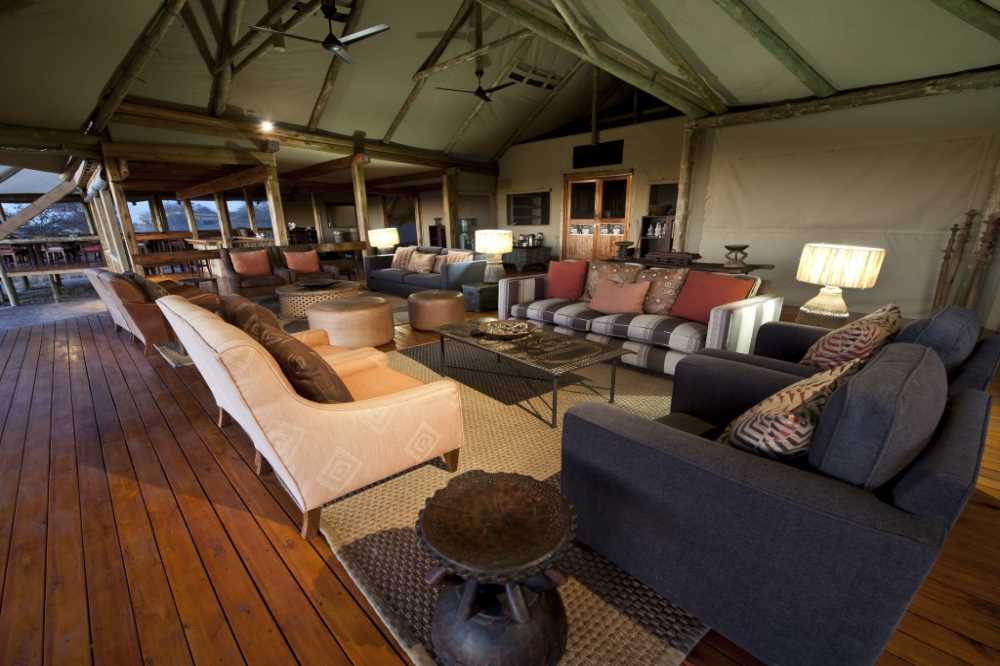 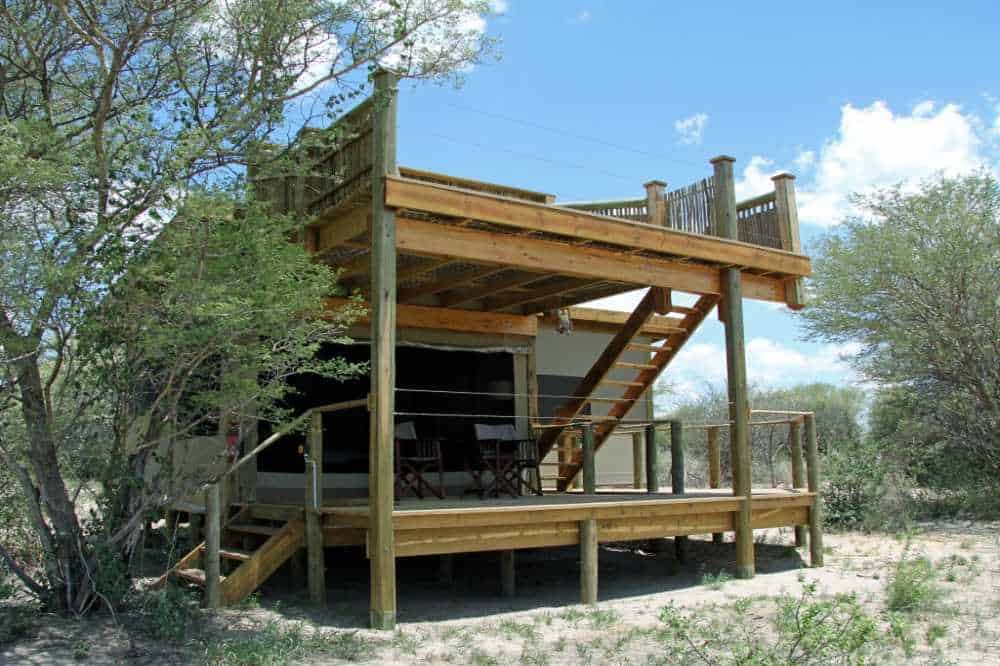 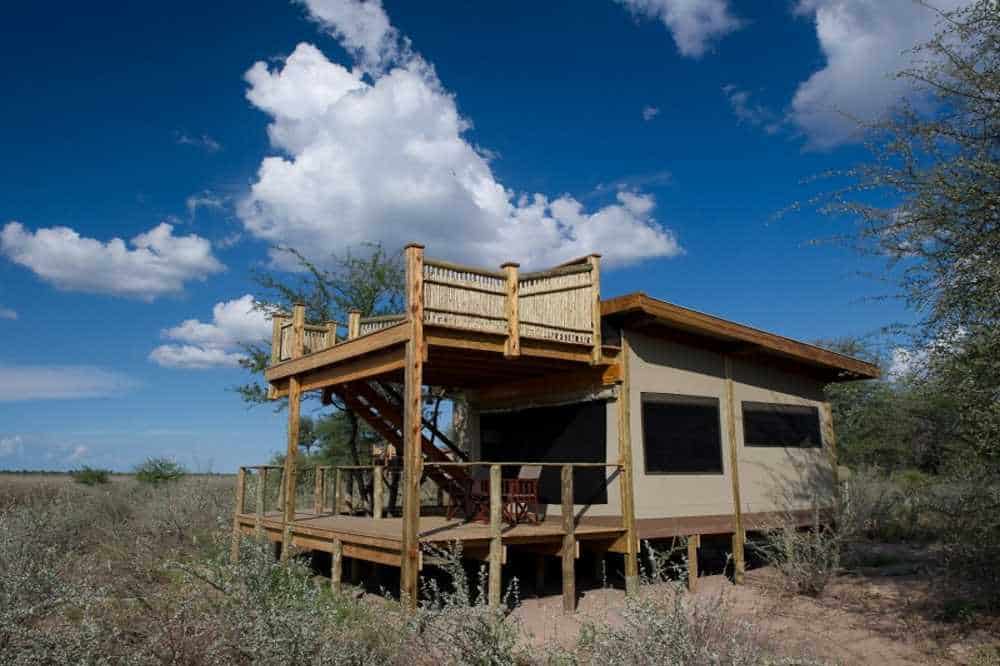 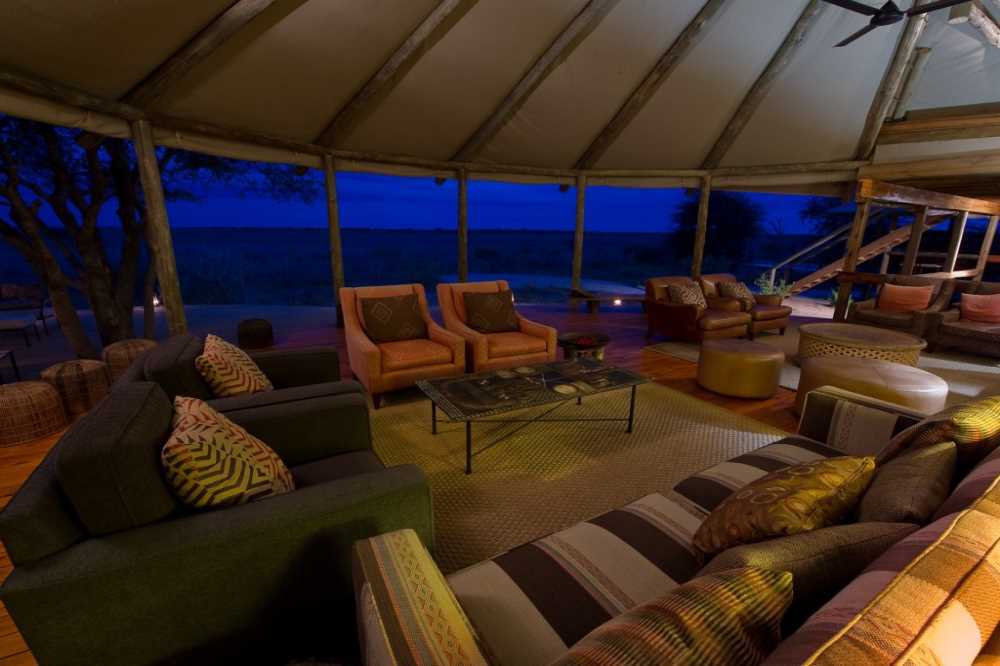 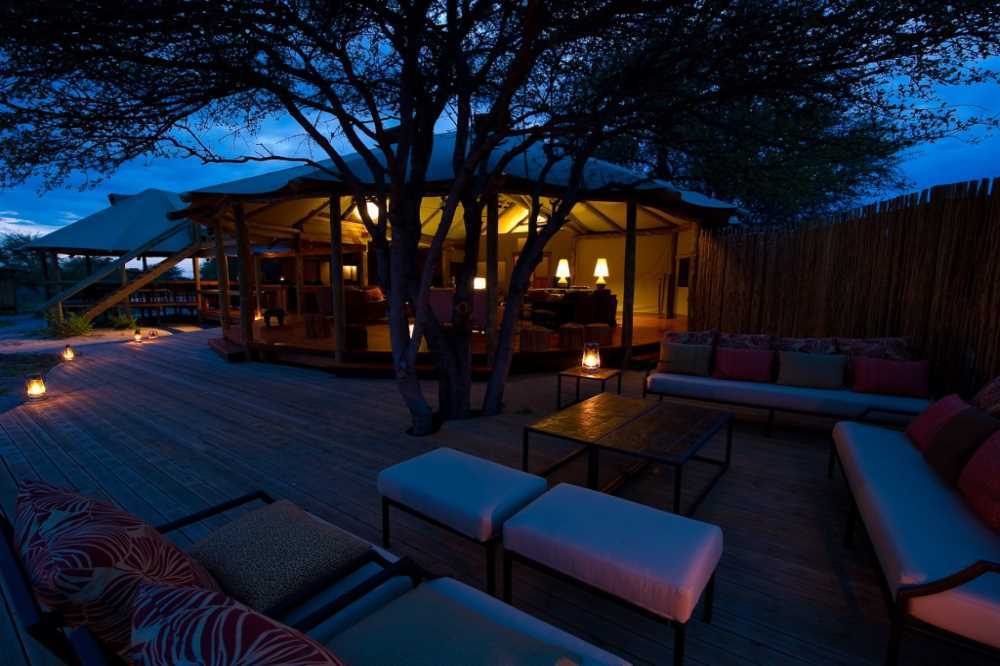 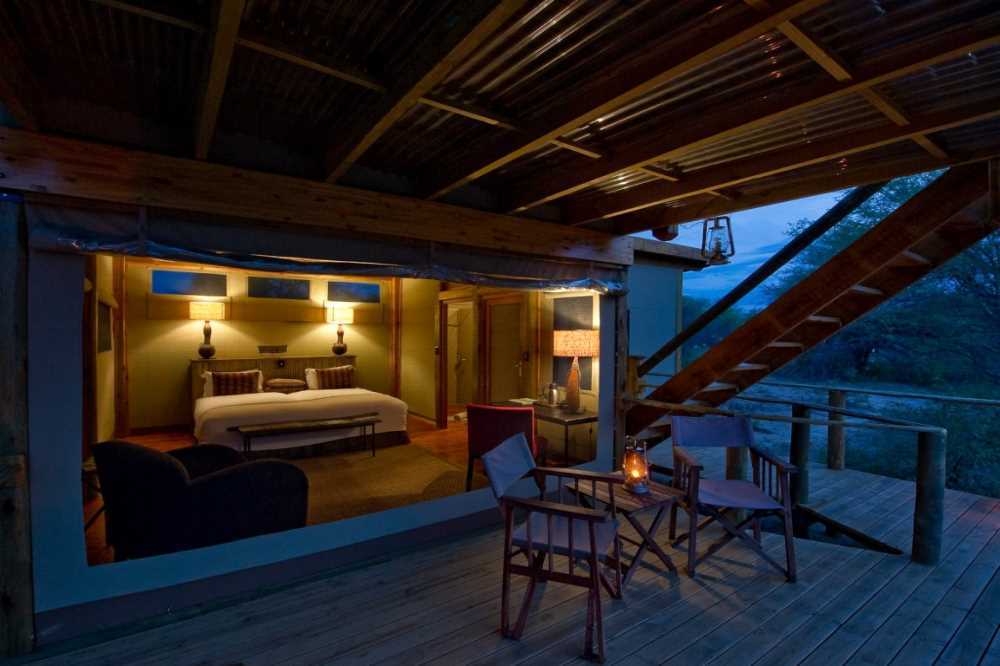 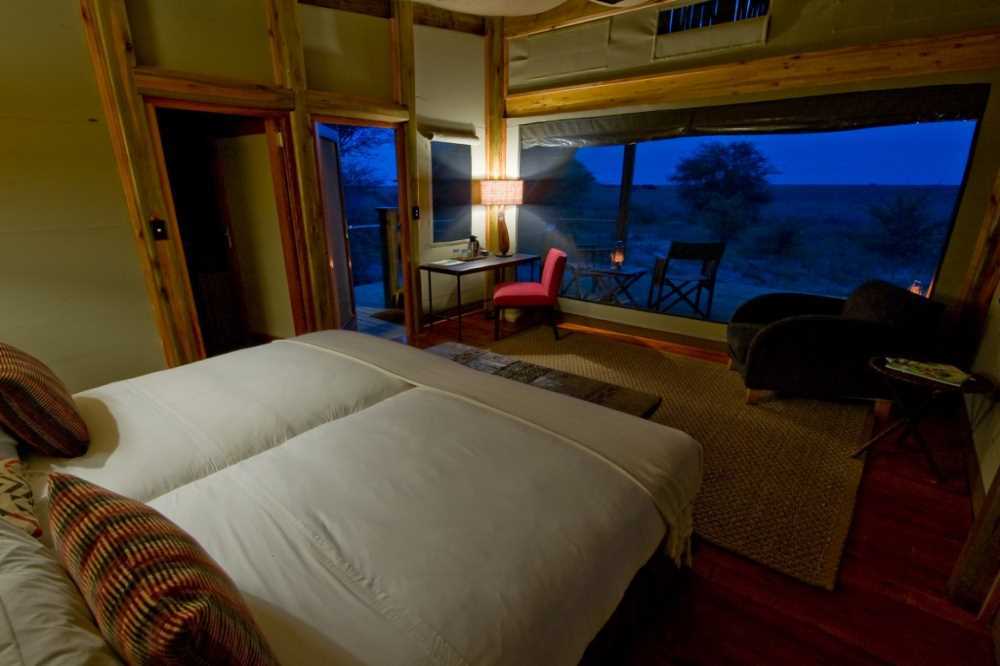 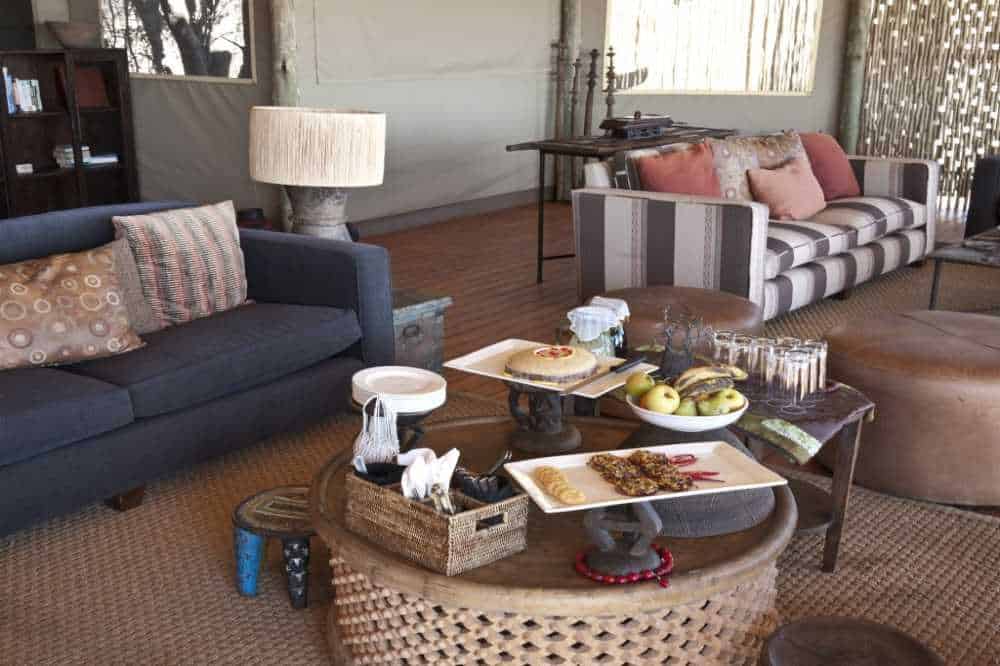 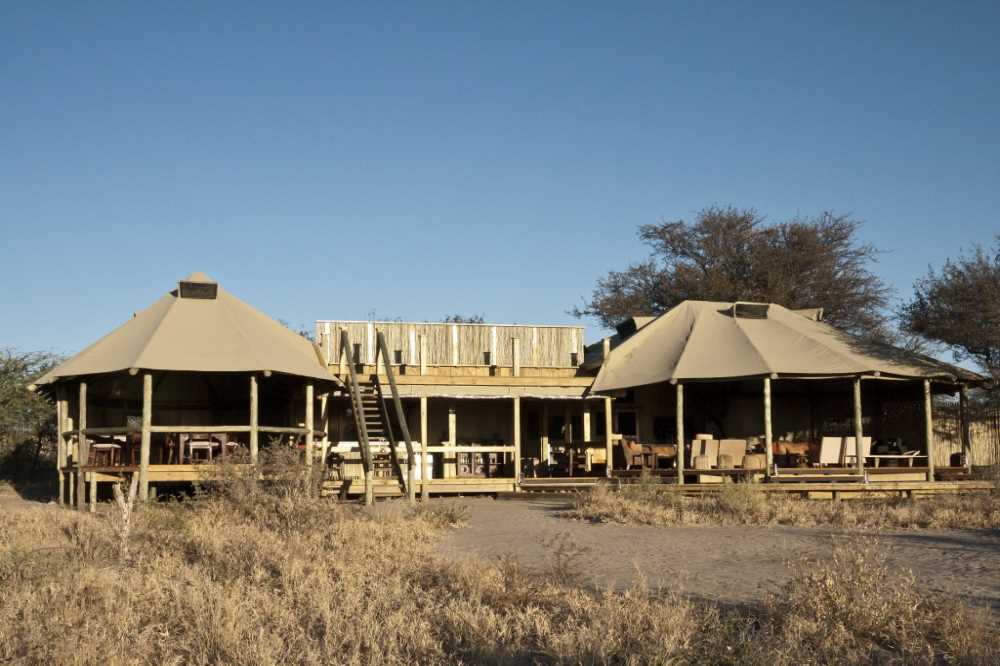 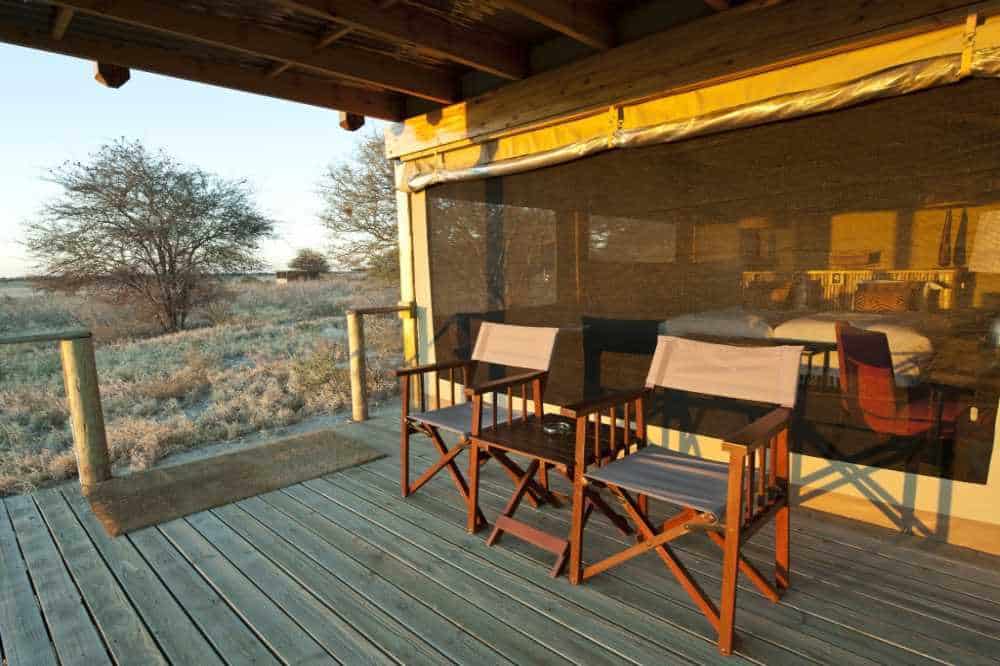 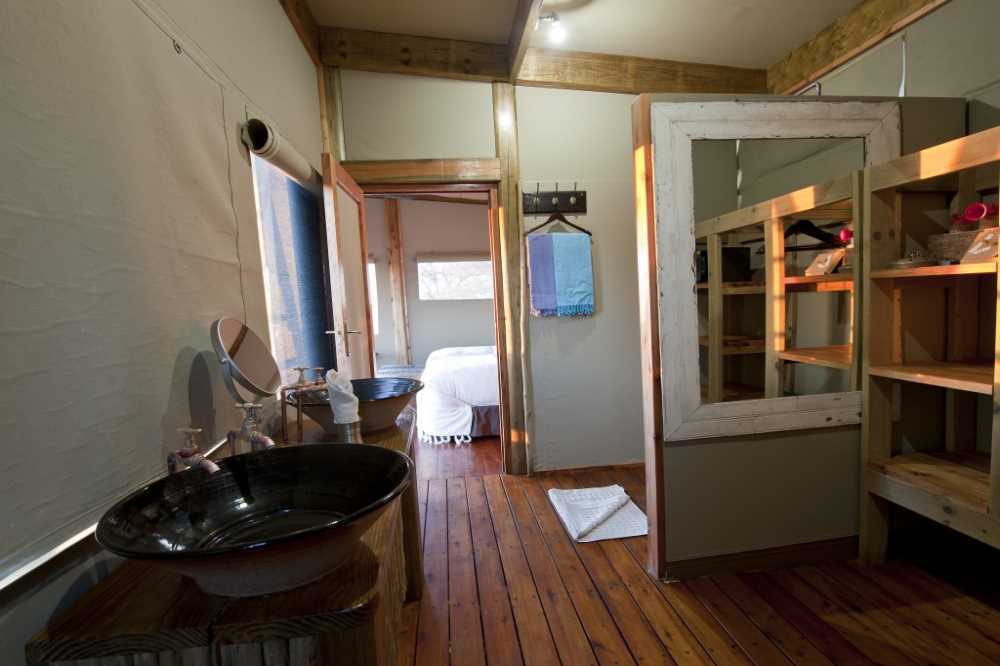 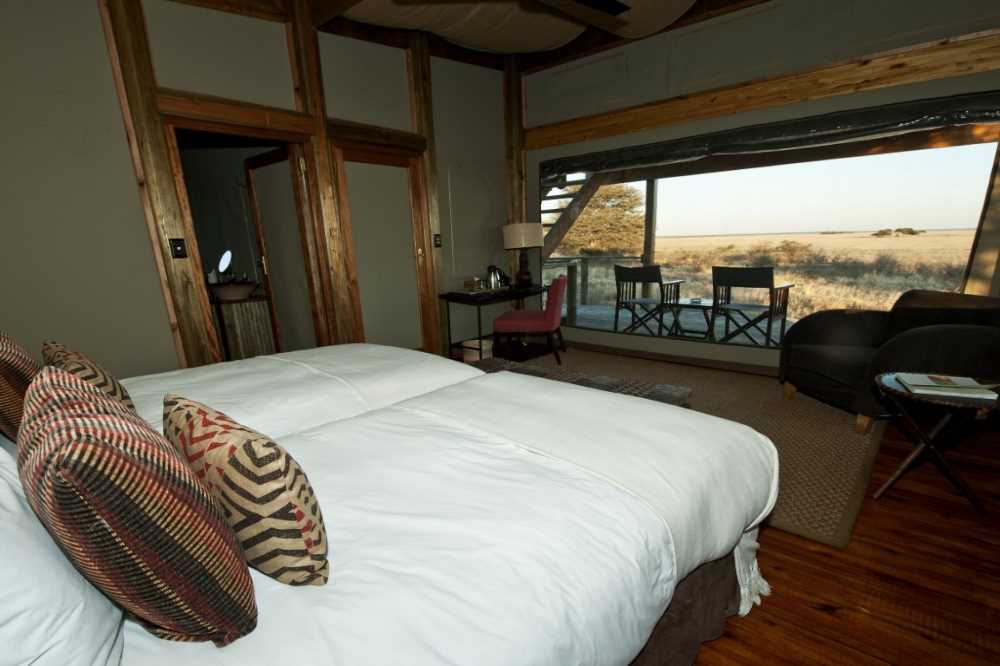 Kalahari Plains Camp is perfectly situated on an immense pan just 20km from Deception Valley and comprises 10 en-suite canvas units with a sleep-out above each – from which to enjoy the night skies. The main area consists of a lounge, dining area and central bar – with a separate swimming pool and deck area. The tents and main area are all raised off the ground to catch the breeze and take in the sweeping, spacious views across the Kalahari. Solar power provides electricity and hot water, and the innovative insulated canvas walls and roof keep the temperatures inside the units comfortable.

Thanks to the diversity of habitats, healthy game populations move through the area and are present to a greater or lesser degree all year round, but with the advent of the summer rains (end of November to April) the desert truly comes to life. Short grasses sprout in the pan systems and fossil riverbeds. Plains game such as springbok, gemsbok and wildebeest converge in their hundreds and thousands to feed. This attracts predators such as the renowned Kalahari black-maned lion and cheetah – which provide some of the most thrilling hunts to be seen.

Guided game drives unlock the fascinating wildlife treasures found in this wonderful. Kalahari Plains Camp is home to some of the worlds best cheetah viewing. The Kalahari black-maned lion is also legendary. Interaction with the San Bushman offers guests life-changing insights into the unique culture of this fascinating people.

The Camp is easily combined with the Okavango Delta and Linyanti regions to provide a comprehensive Botswana experience – and in summer it is simply unbeatable as a wildlife destination.

Kalahari Plains Camp is settling into the rhythm of the Kalahari and will be embarking on a series of conservation initiatives shortly.

Possibilites include cheetah and black-maned lion initiatives, as well as the involvement of the local San (Bushmen) community known as the Basarwa. As with all Wilderness Safaris projects, the integration of local peoples into the ecotourism industry and the resulting upliftment of communities is fundamental.

The Baswara have been resident in and around this area for thousands of years. Originally a true nomadic, hunter-gatherer culture, the lifestyle of the Baswara now revolves around more permanent settlements situated within the southern half of the Central Kalahari Game Reserve.

The concession is located on the northern plains of the Central Kalahari Game Reserve (CKGR) where broad-leaved and acacia savannah mosaics dominate the landscape. The CKGR is one of the biggest protected areas in Africa and holds significant populations of large predators such as the Kalahari black-maned lion, cheetah and brown hyaena.

Prime wildlife viewing areas include places with evocative names such as Deception Valley and Sunday Pan. The former is all that remains of an ancient riverbed which today is an 80km-long gentle valley floor covered with short palatable grasses interspersed with picturesque tree islands. The name ‘Deception’ is derived from the mirage effect caused by the dry surface of the pan halfway along its length which often appears misleadingly full of water.

Healthy game populations move seasonally between dune and valley near the Kalahari Plains Camp. During the rainy summer months the northern part of the CKGR offers some of the best wildlife viewing in Botswana. The abundance of predators and their prey is perfectly complemented with lush green landscapes, floral displays and beautiful skies. At this time of year these verdant flatlands are alive with aggregations of gemsbok, springbok and blue wildebeest. These aggregations of herbivores on the fossil riverbeds result in unusually high predator concentrations: with both Kalahari black-maned lions and cheetah featuring heavily in guest experiences. Wild dog and leopard are seen on occasion. Black-backed jackal and bat-eared fox also occur. Other sightings include southern giraffe, steenbok, red hartebeest and the charismatic ground squirrels and meerkats (suricates).

In the winter months, the atmosphere is typical of a desert system: warm and dry. Game viewing remains productive, the wildlife having moved into the vegetated dunal belt and pan systems surrounding the valleys. A series of ecologically placed waterholes further enhances wildlife viewing during the dry season.

After sunset, the Camp is alive with the sounds of roaring lions, White-faced Scops-Owls and the garrulous calls of barking geckos. The avifauna in the reserve is equally diverse with over 220 species recorded to date. There are significant healthy populations of regionally threatened species, like Kori Bustard and Lappet-faced Vulture. Birders will particularly enjoy the opportunity to see a variety of arid-west endemic species such as Burchell’s Sandgrouse, Grey-backed Sparrowlark, Kalahari Scrub-Robin and African Wren-Warbler. The vivid colours of birds such as Crimson-breasted Shrike and Violet-eared Waxbill often provide a startling contrast to the sometimes stark surroundings and incredible photographic opportunities.