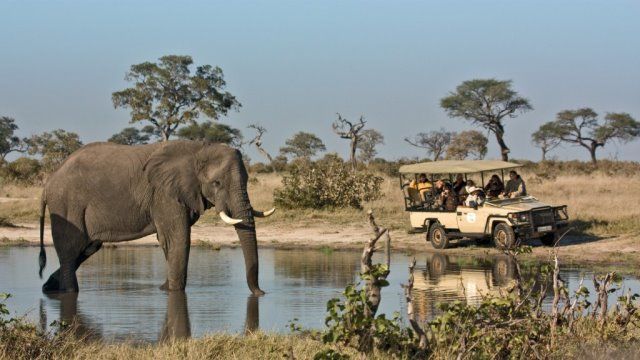 The famous Savuti Channel runs a distance of 100 kilometers from the Chobe River, through a gap in the sand ridge, to the Mababe Depression. Falling only approximately 18 meters, this channel brings water from the Chobe to Mababe, creating a small marsh where it enters the Depression.

The dramatic stretch of grassland and desert-like landscape in the western region of the Chobe National Park is known as the Savuti. The area covers almost 1,930 sq. miles (5,000 sq. km) of northern Botswana. The Magwikhwe Sand Ridge and the desolate Savuti Marsh at the end of the Savuti Channel are all that remain of a once great lake that covered much of northern Botswana. Geological changes and the erratic temper of the channel leaves the region dry for long periods of time.

When David Livingstone explored the region in 1851, he called the area a “dismal swamp”. In 1888, the channel dried, leaving the marsh and region a desolate wasteland for the next 70 years. When the channel began flowing again in 1957, the floodwaters drowned the trees of the region. The channel quickly dried again, leaving a stark, abstract landscape of dead trees. The region reached another dry spell in 1982, and only recently began to see the refreshing flow of water again.

This picturesque, diverse landscape brings lush grasslands in some areas and desert-like, bleak stretches of land dotted with camelthorn trees in other areas. Jutting from the vast, dry lands of Savuti are the Gubatsa Hills, another interesting geological feature of the region. The hills formed nearly one billion years ago due to volcanic activity.

This vast open space in Botswana allows for excellent safari adventures. The seasonal rains leave the region dotted with waterholes, around which large groups of animals congregate when the land begins to dry. The endangered wild dog, known as the most efficient hunter in Africa, provides a unique animal viewing opportunity in this region. Following the lush grasslands in the rainy season, thousands of zebra pass through the region for their annual migration to the grasslands of the Mababe Depression.