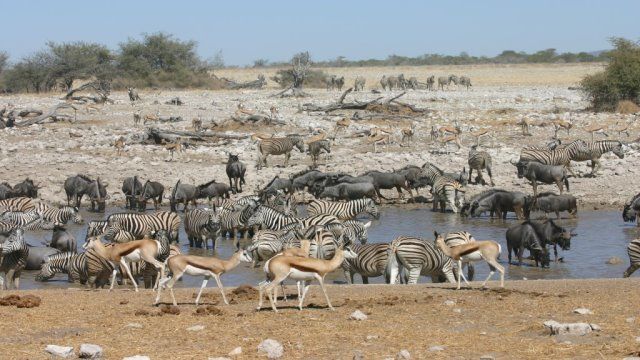 Name. The word ”etosha” means place of dry water or, according to other sources, huge, white area.
History. Game Reserve 2, proclaimed by German Governor Friedrich Von Lindequist in 1907, comprised the Etosha pan and most of Kaokoland and covered almost 100 000 square kilometres. The park was reduced in 1947 by allocating Kaokoland to Herero. According to recommendations of Odendaal Commission (1962) park’s area was reduced even further. The present size of the park is 77 per cent less than before the Odendaal Commission.

The Etosha Pan dominates the park. The salt pan desert is roughly 130 km long and as wide as 50 km in places. The hypersaline conditions of the pan limit the species that can permanently inhabit the pan itself; occurrences of extremophile micro-organisms are present, which species can tolerate the hypersaline conditions. The salt pan is usually dry, but fills with water briefly in the summer, when it attracts pelicans and flamingos in particular. Perennial springs attract a variety of animals and birds throughout the year, including the endangered Black Rhinoceros and the endemic Black-faced Impala.

Best time for visit. Winters are cool and dry in the park. Game tend to stay closer to water holes and chances to spot species are better. The rainy season normally begins at the end of October – beginning of November. Average rainfall figures: Okaukuejo: 412 mm, Halali: 430 mm, Namutoni: 442 mm.

We operate our safaris in a 30,000 hectare area which is an extension of Etosha, as it lies directly on the southern boundary of the park. The safaris take place in Etosha as well as the private reserve which includes night drives, hides and other activities which are not permitted in Etosha.