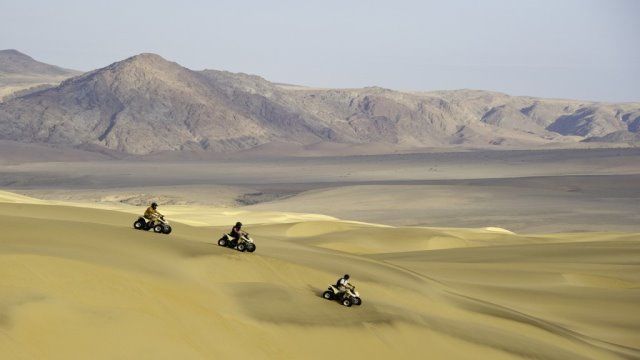 The Kunene Region in Namibia

The Kunene Region is situated in Namibia’s remote north-west, bordering Angola to the north and including the inhospitable Skeleton Coast to the south. The Region gets its name from the Kunene River, which forms the border between Namibia and Angola.

The landscapes, with their spectacular desert mountains, gorges, plains and ephemeral rivers are stunning. These seasonal rivers create a focus for wildlife – particularly desert adapted elephant and rhino. Zebra, giraffe and various species of antelope and even lion also thrive in this region. The Region is home to three main ethnic groups – the Damara, Herero and Himba people, all of whom have a rich cultural heritage.

In the north of the country, the mighty Kunene River forms part of Namibia’s border with Angola for about 325km (202miles). Winding through a primeval landscape, the Kunene is characterized by thundering waterfalls, raging white-water rapids and tranquil streams.

Green turtles are encountered year round at the Kunene River mouth, but there is no confirmed nesting in Namibia. It is the second largest marine turtle growing to 1.5m. The adult feeds on sea grass and algae.

Epupa Falls: The Epupa Falls (Herero for falling water) are about 190km upstream of the Kunene River mouth and is one of Kaokoland’s most breathtaking sights. It is here that the river fans out into a number of channels before cascading into a deep gorge. This dynamic series of falls and cascades are ushered through a 500m wide series of paralleled channels, dropping a total of 60m over a distance of 1.5km. The greatest single drop measures at 37m and is commonly identified as the Epupa Falls. The best time to visit is in April and May, when the river is in peak flow.