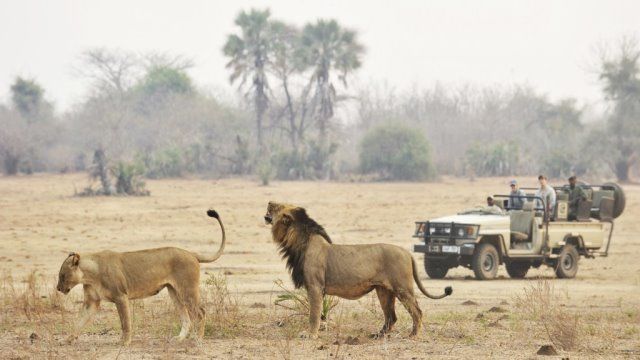 The Lower Zambezi National Park covers an area of 4092 square kilometers, but most of the game is concentrated along the valley floor. There is an escarpment along the northern end which acts as a physical barrier to most of the parks animal species. Enormous herds of elephant, some up to 100 strong, are often seen at the rivers edge. ‘Island hopping’ buffalo and waterbuck are common. The park also hosts good populations of lion and leopard and listen too for the ubiquitous cry of the fish eagle.

The ecological unit of LZNP and the Chiawa Game Management Area support a relatively large population of mammals. The escarpment and plateau regions are largely inaccessible and have not been formally surveyed. The valley floor, although a small area is host to many of the bigger mammals, elephant, buffalo, hippo, waterbuck, kudu, zebra, and crocodiles, impala and warthog. Occasionally, roan, eland and the Samango monkey. Nocturnal animals here are hyaena, porcupine, civet, genet and honeybadger.

The birdlife along the riverbanks is exceptional. Many a fish eagle can be seen and heard for miles around. Nesting along the cliffs are white fronted and carmine bee eaters. Another unusual the red winged pratincole, the elegant crested guinea fowl, black eagle, and vast swarms of quelea. In summer the stunning narina trogon makes its home here. Other specialities are the trumpeter hornbill, Meyers parrot and Lilian’s lovebird.

The vegetation in the area is predominated by Acacia albida trees, a thorn species 10 – 30m high with the classical shady umbrella canopy. It is able to tolerate sandier soils than other woodland species and serves to stabilise infertile sandbanks and reduce erosion. Winterthorn pods are also remarkably nutritious to elephants who digest it leaving about 40% intact, thereby contributing to its proliferation.

The best time is mid season from June to September, but all lodges and canoeing operators are open from April to November. Kayila lodge is open all year. Fishing is at its best in September / October.