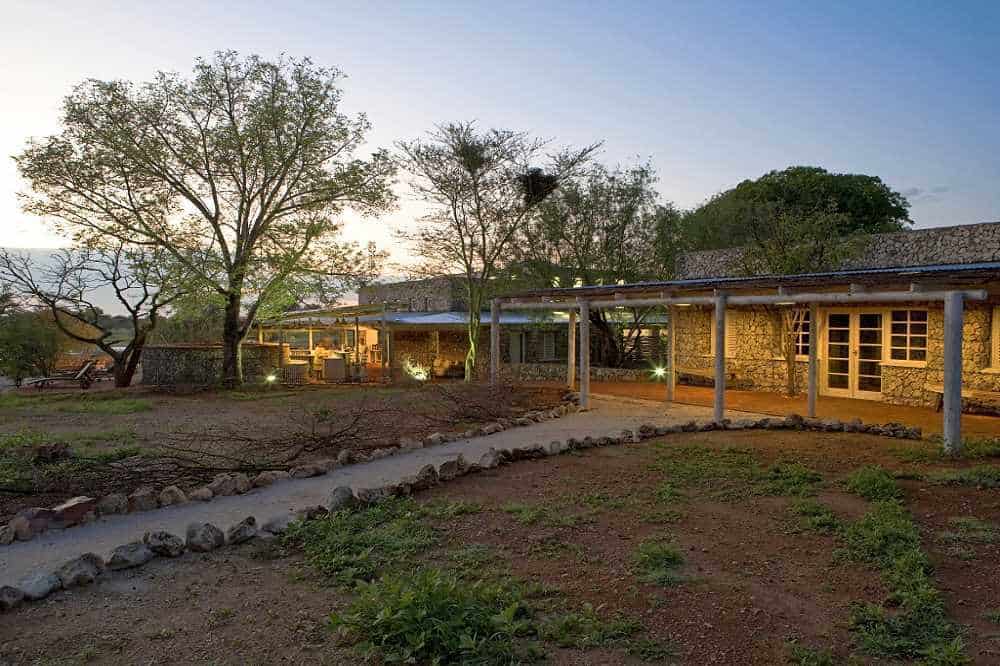 Anderssons Camp takes it’s name from Charles Andersson, the Swedish explorer who first discovered the Etosha Pan with Sir Francis Galton in 1851. Set against the backdrop of the low Ondundozonanandana Mountains, The camp is surrounded by scrub-covered plains and white calcrete soils. 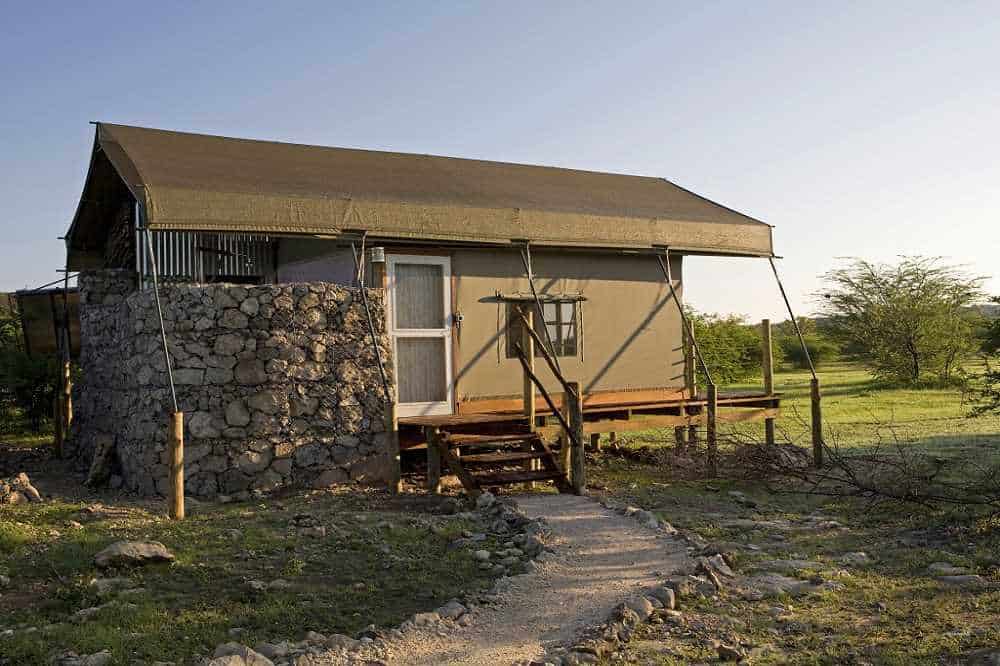 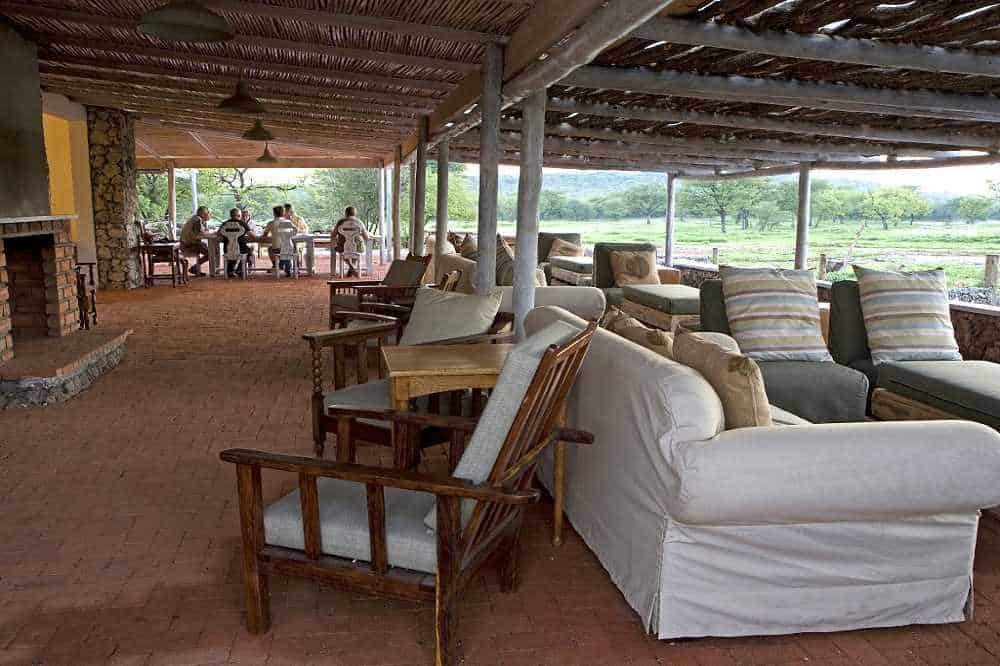 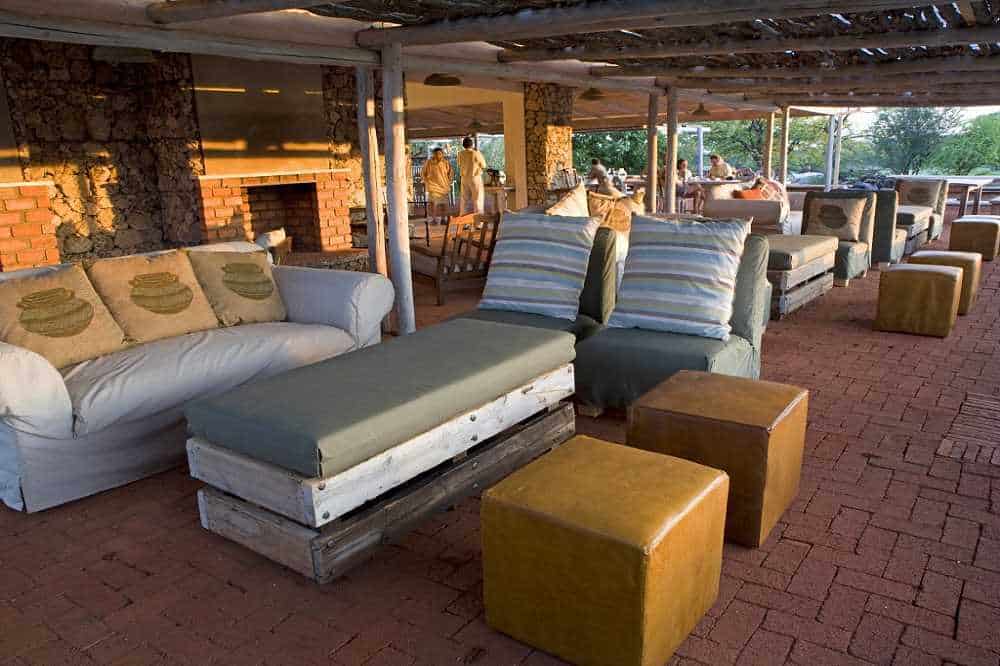 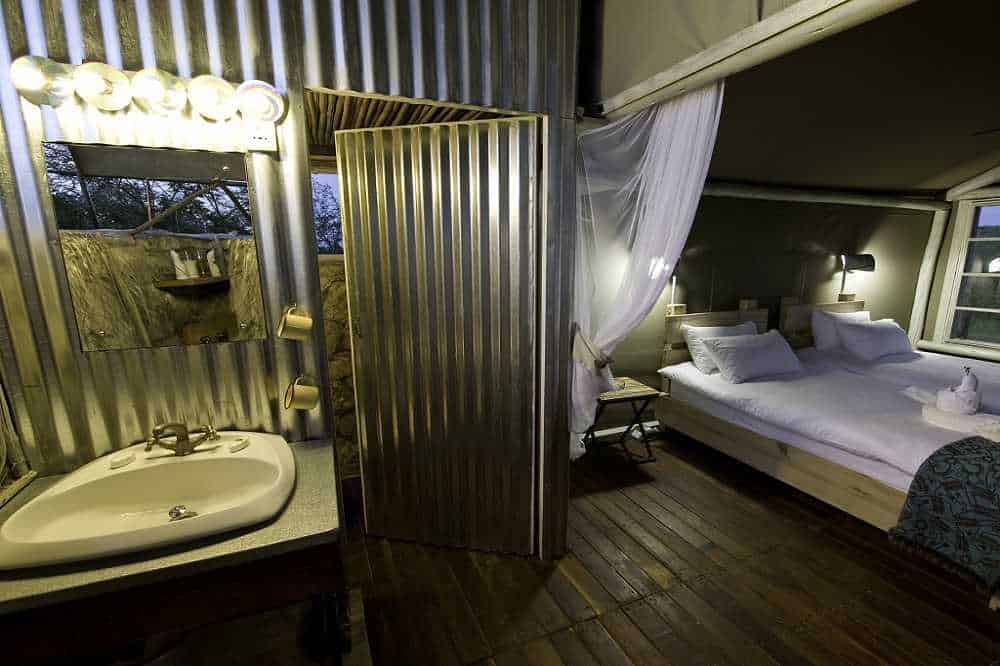 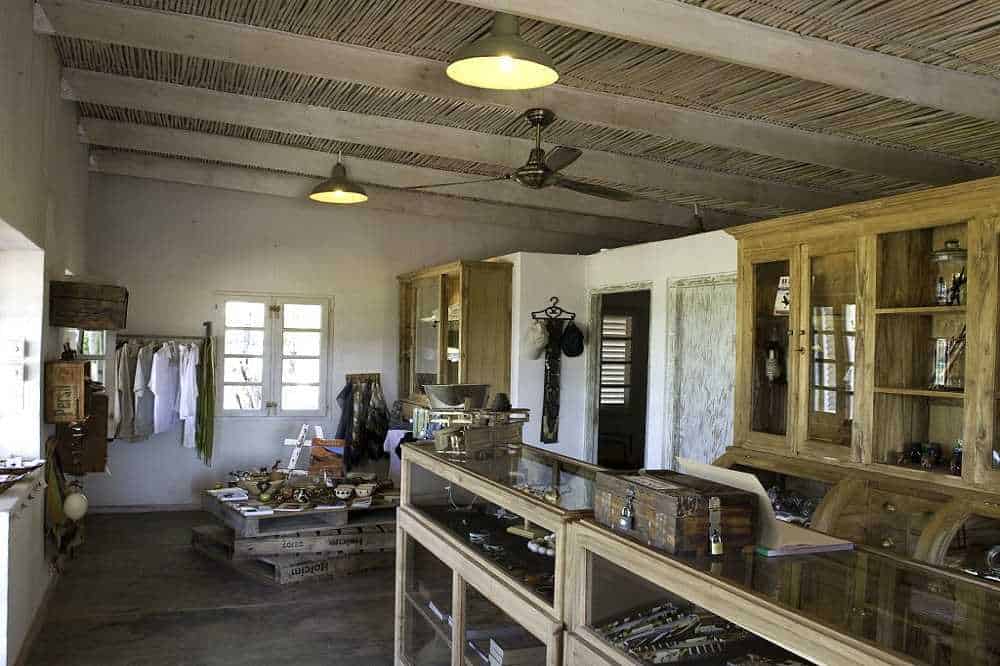 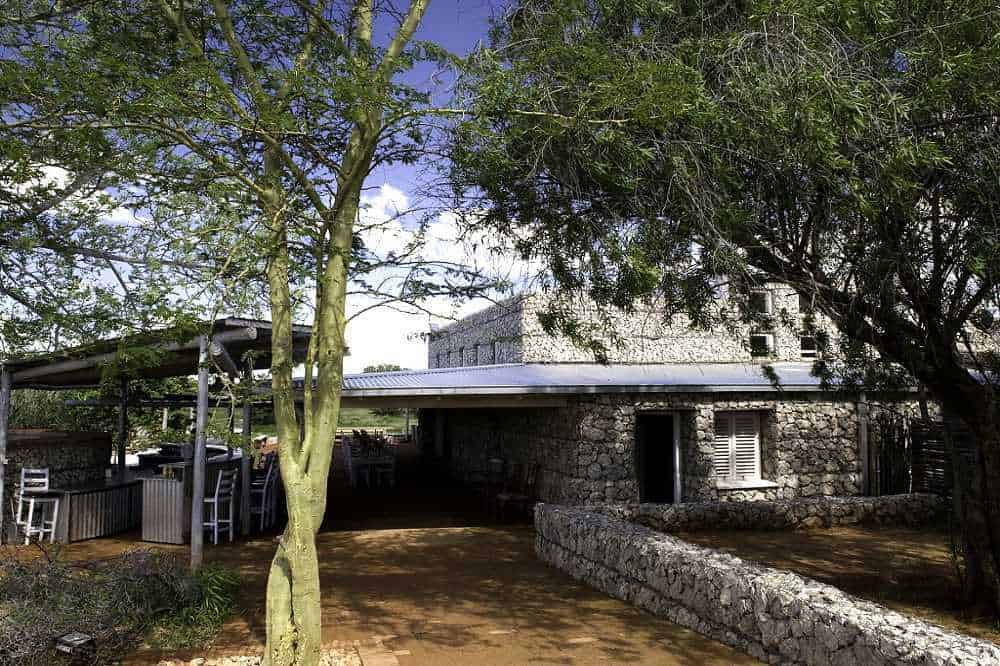 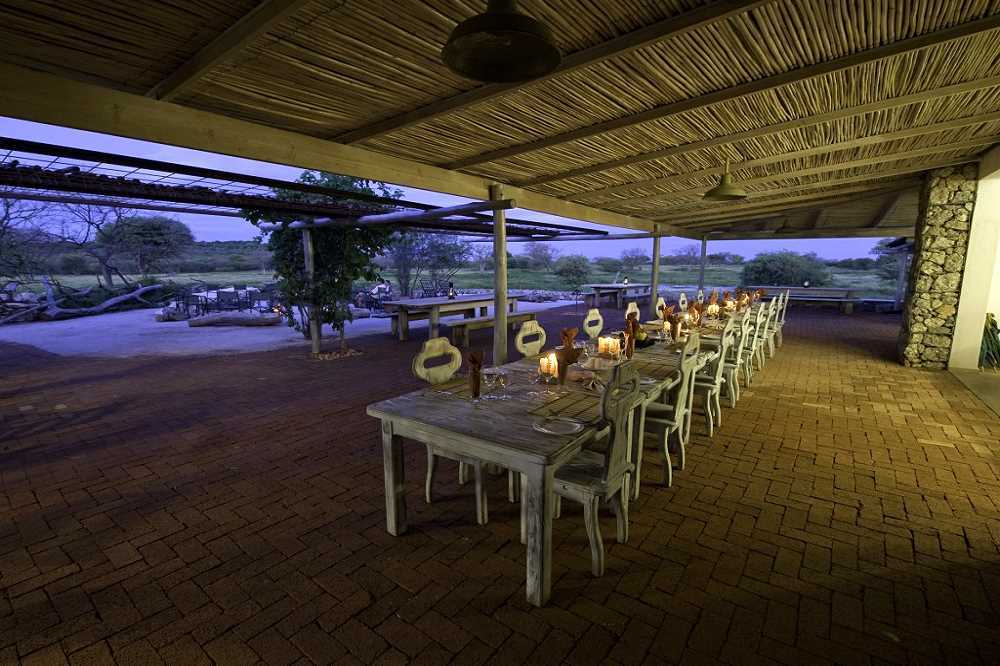 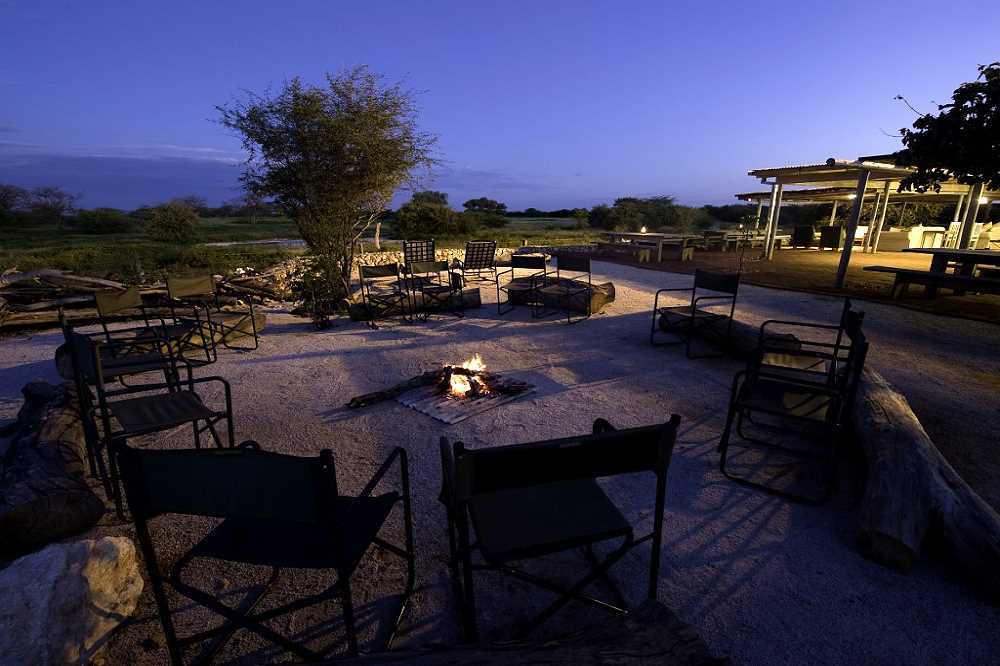 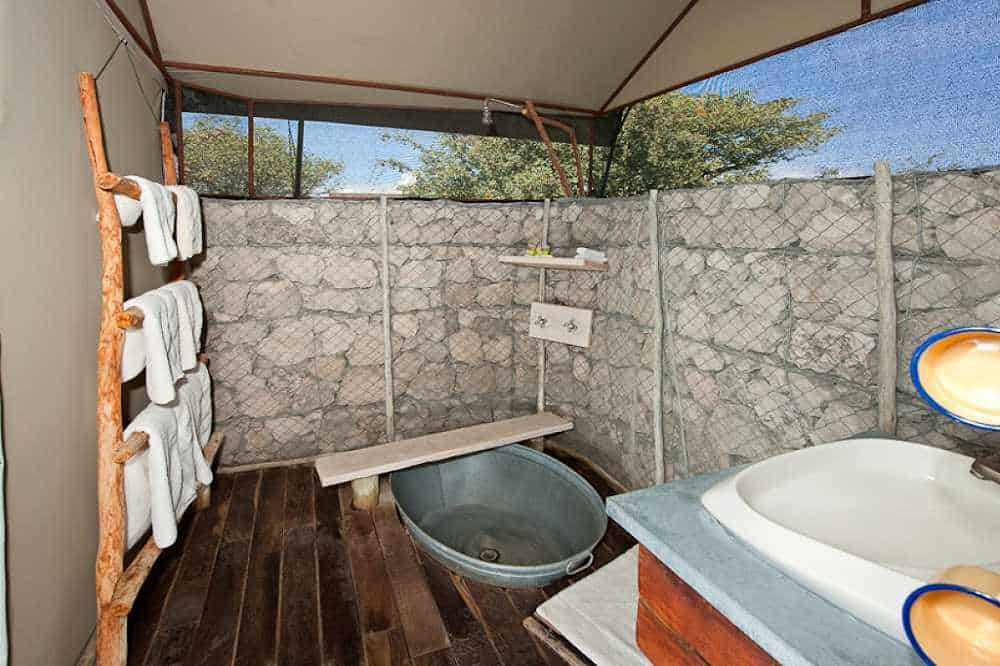 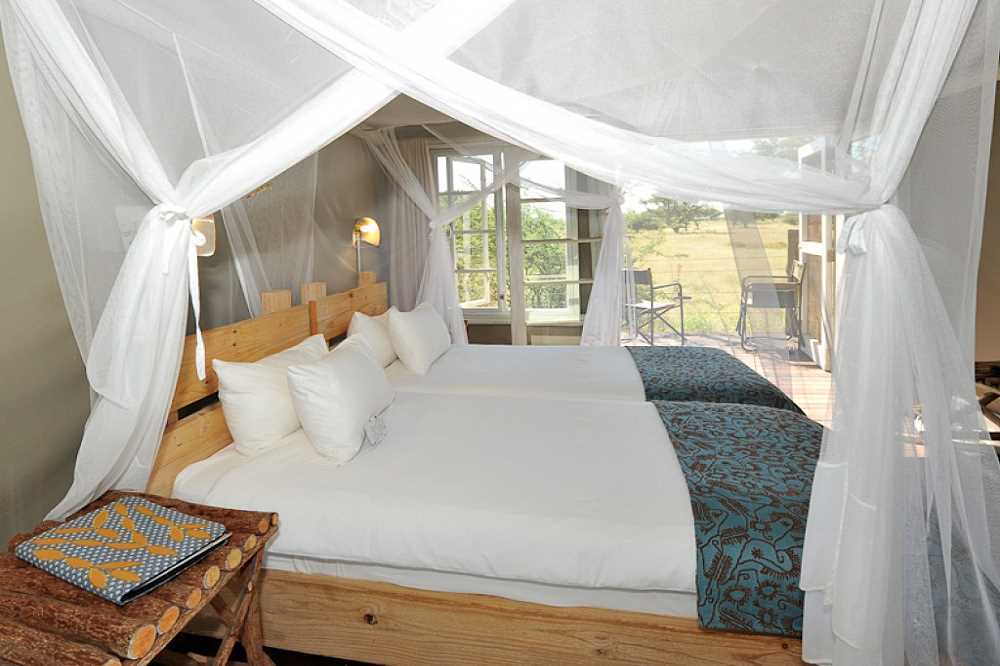 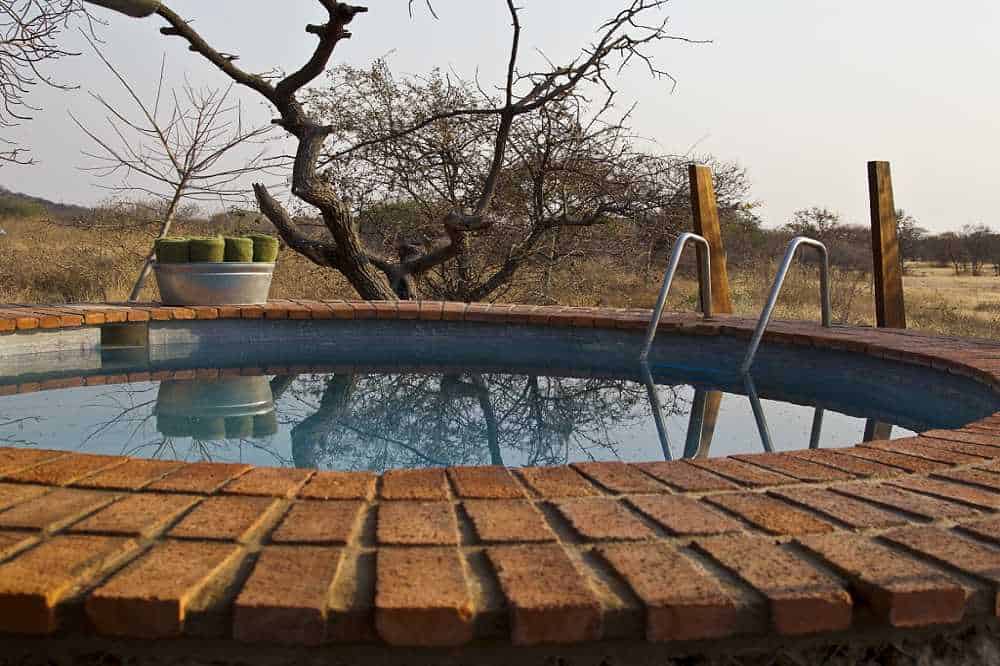 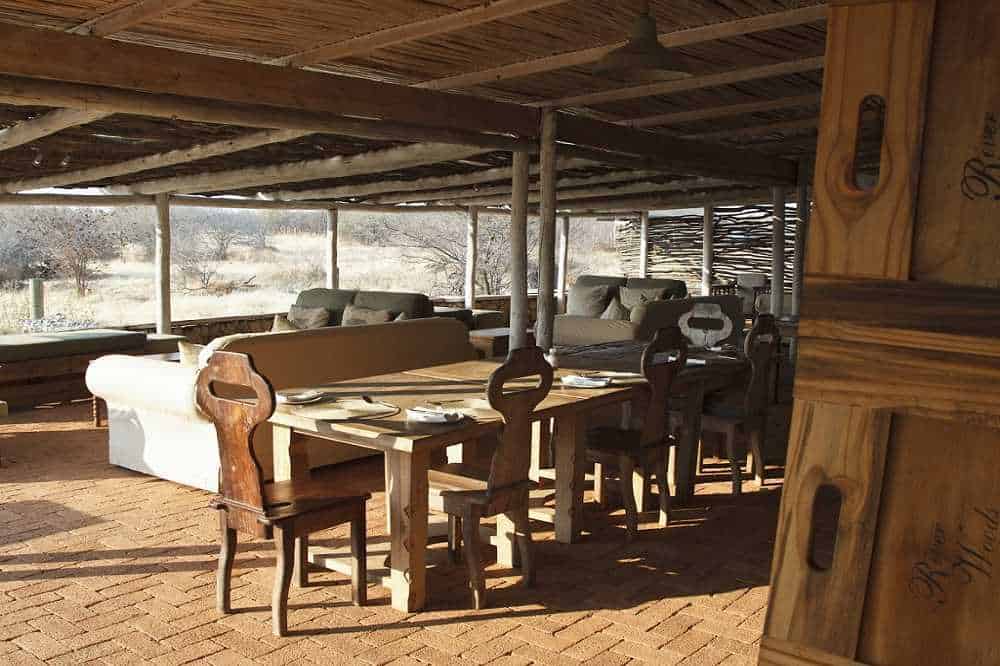 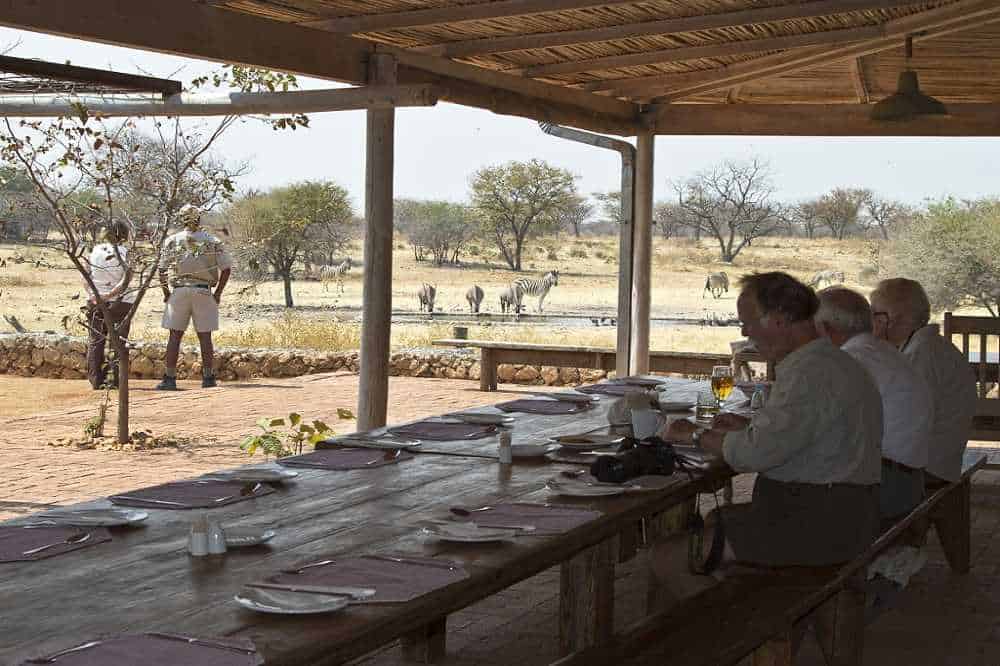 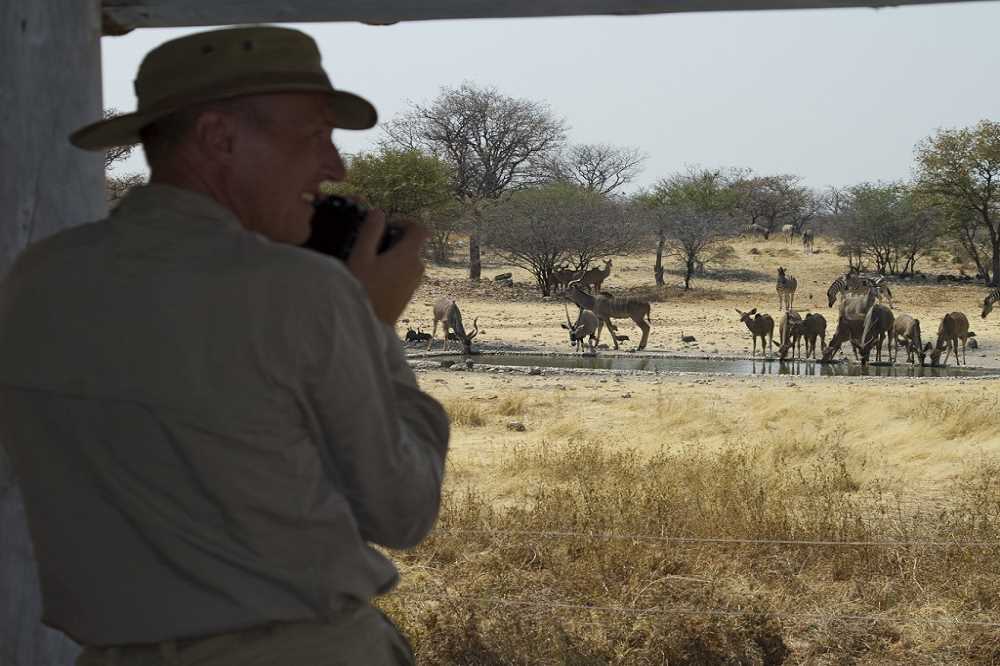 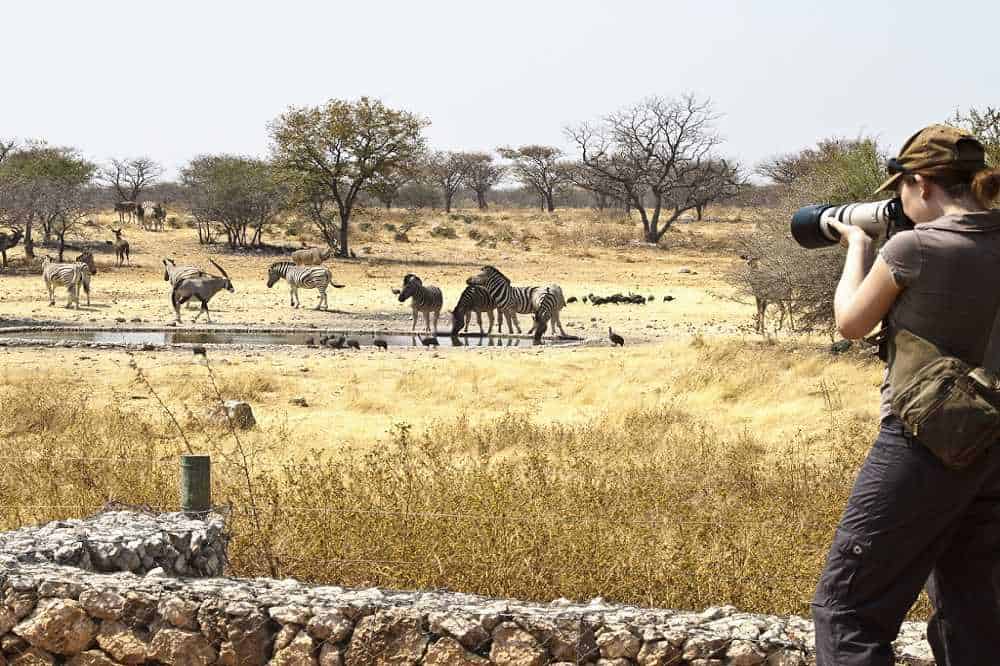 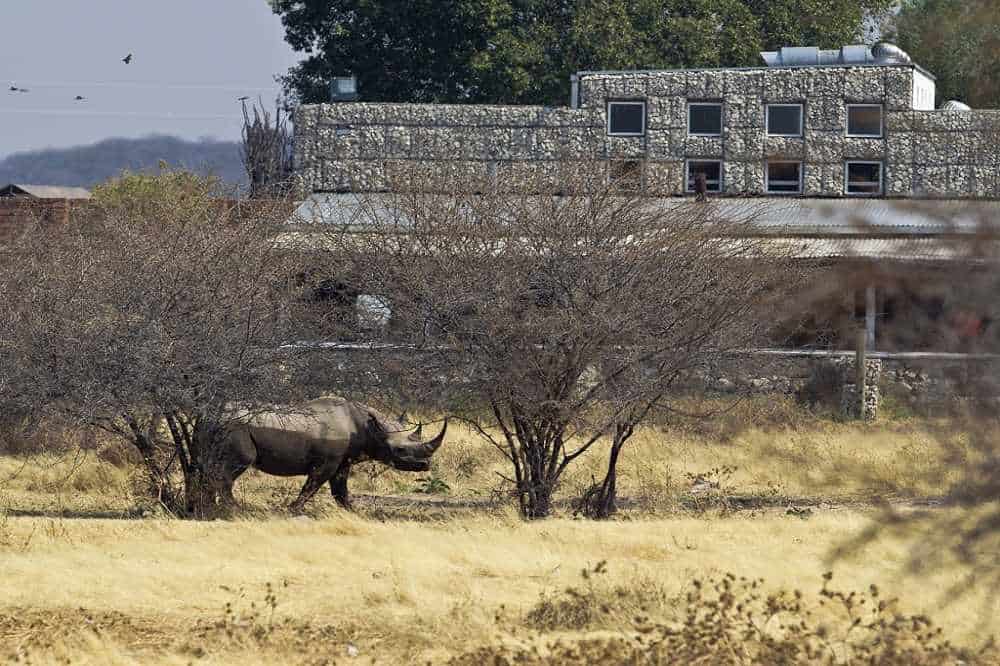 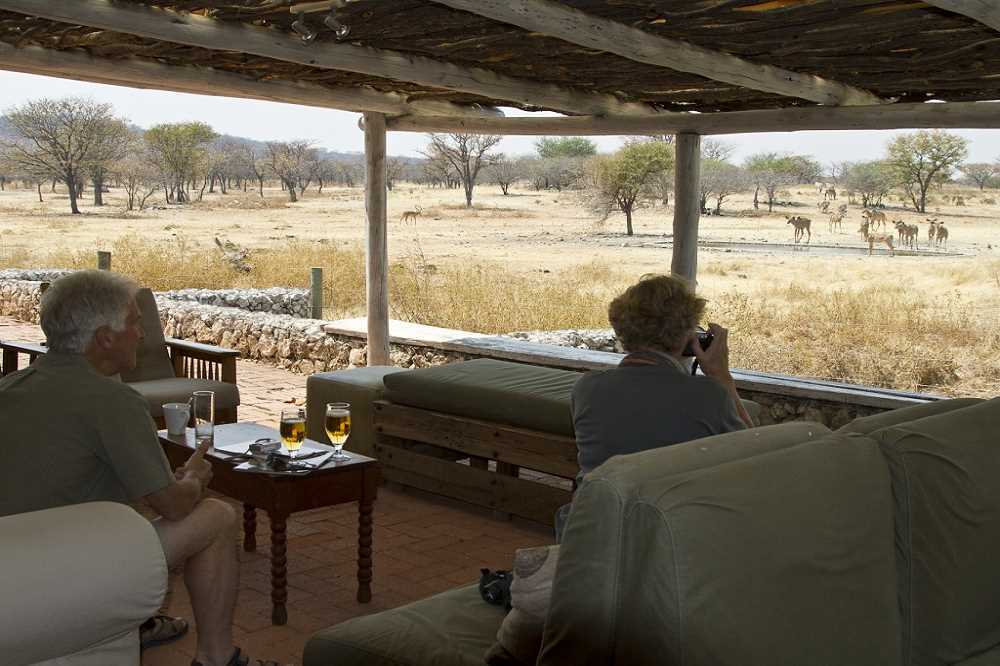 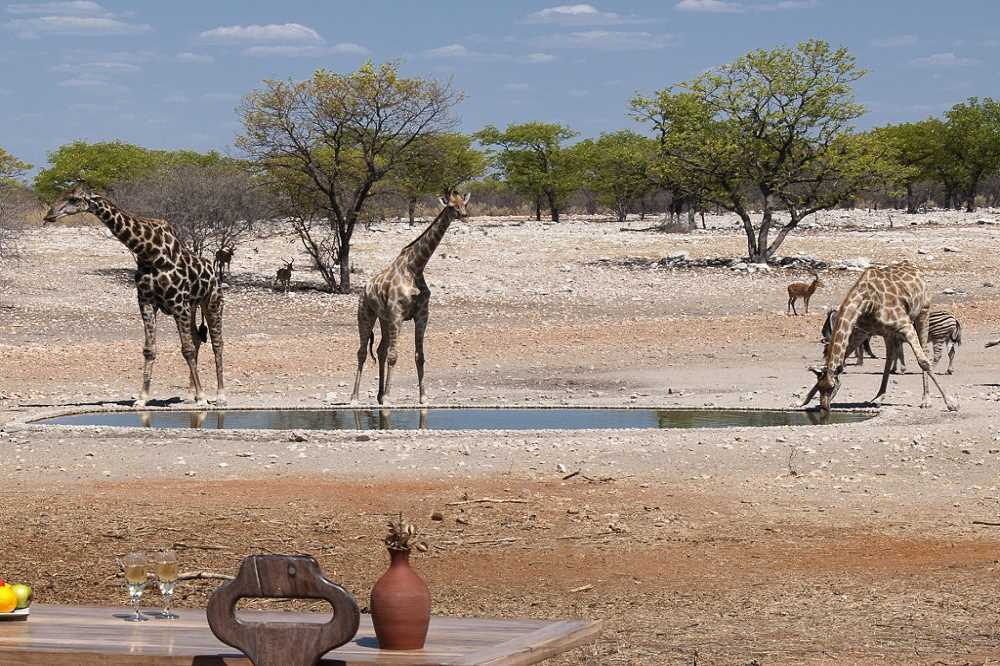 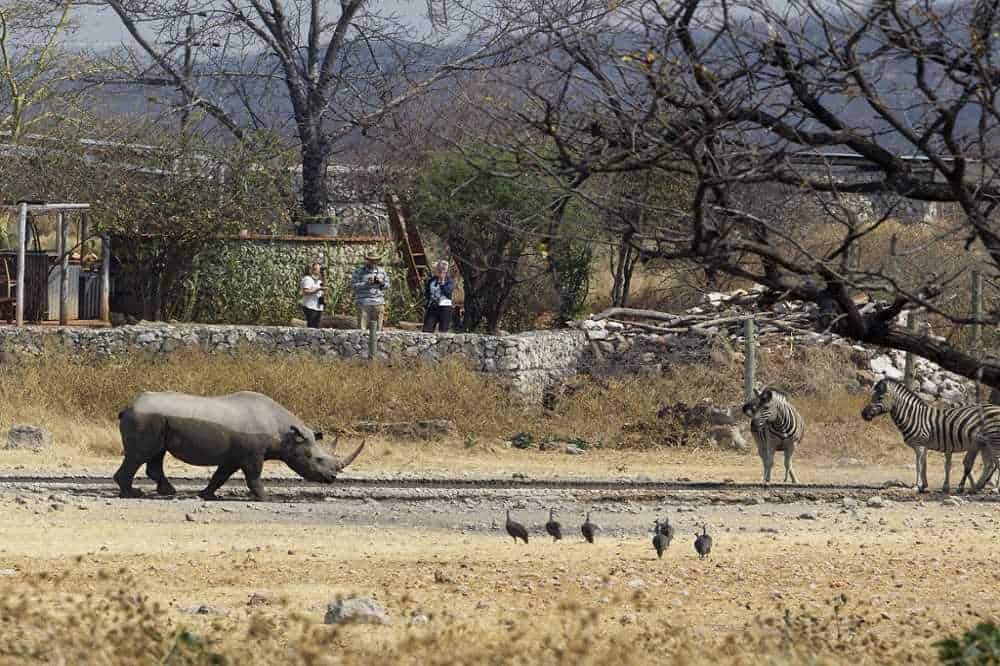 This former farmstead has been tastefully rebuilt to luxury modern-day standards. The old farmhouse now forms the main area of Anderssons Camp with some 20 tented guest units radiating outwards into the secluded mopane woodlands typical of the region. Tents are a clever mix of calcrete stone cladding, canvas and wood, with double-door entrances and a small verandah that is an extension of the elevated wooden decks on which the tents are constructed. The en-suite bathrooms feature a uniquely designed open-air private shower.

Anderssons Camp’s close proximity to Etosha Pan is ideal for full-day self-drives or guided drives into the Etosha National Park to take in the plethora of game found here.

Etosha National Park is Namibia’s premier wildlife destination. At almost the size of Switzerland it is certainly one of Africa’s largest game parks. Large herds of plains game concentrate around the waterholes in the dry season, whilst the summer months’ sporadic rainfall produces a profusion of new life – with pronking baby springbok and comical young wildebeest.

Anderssons Camp is a model of eco-sensitive lodging and provides an authentic, safe and down-to-earth experience for small groups, families and independent travellers to Etosha National Park. It also is easily accessible by road.

Ongava Game Reserve was formed in 1991, when shareholders of Ongava converted four unproductive cattle ranches into a highly productive 30,000 hectare private game reserve that is now a haven to large concentrations of wildlife. The boundary is unfenced, allowing a host of wildlife to move between the Ongava Game Reserve and the Etosha National Park. This also region acts as a buffer to protect farms to the south from being invaded by hungry big game and predators alike.

Most general game has been reintroduced onto the property, including springbok, gemsbok (oryx), blue wildebeest, Burchell’s zebra, Hartmann’s mountain zebra, common waterbuck, red hartebeest, southern giraffe, eland, Damara dik-dik, steenbok, klipspringer and the largest population of black-faced impala (listed as Endangered by the IUCN) outside of the Etosha National Park.

The most successful reintroduction project on the Ongava Game Reserve, however, is the white and black rhino project – where Ongava holds one of the largest rhino custodianships for the Namibian government. These custodianships are set up in safe havens throughout the country in hopes of breeding rhino to more sustainable numbers and reintroducing them into areas where they previously flourished. Ongava Game Reserve is one of the few places in southern Africa where you will have a realistic chance of encountering both of these amazing creatures.

Anderssons Camp is situated in the Ongava Game Reserve on the southern boundary of Etosha National Park, Namibia’s premier wildlife destination – providing an abundance of incredible big game viewing regardless of season.

Located in central-northern Namibia, Etosha National Park takes its name from the world famous Etosha Pan – one of the many large salt pans formed by the wind in this flat region. An evocative remnant of an ancient superlake, Etosha means ‘great white place’ in the local language – a name befitting the blinding white salt bleached earth that stretches over 120km east to west and 55km north to south (covering 5000km2). Etosha National Park itself covers a vast area of over 20 000km2, protecting an incredible wealth and diversity of both fauna and flora.

The Etosha Pan is a parched wasteland most of the time, but occasionally a few rivers and the unpredictable heavy summer rains can fill the pan. After particularly good rains, Etosha Pan can attract over a million flamingos to its salty waters. The salty nature of this environment does not support much vegetation, but its edges give way to a surprising variety of vegetation types: from the broad swathe of mopane that encircles the broader area; to the tall tree canopies of the tamboti and terminalia woodland in the east; and to the open acacia-strewn plains, grasslands and dwarf shrub savannah in the west.

Here mopane woodland dominates, whilst a low row of dolomite hills, evocatively called the Ondundozonanandana Range, provide relief to the otherwise flat surroundings and harbour populations of the endemic Anchieta’s dwarf python and the local subspecies of rock hyrax. Most general game are present in the Ongava Game Reserve as much as within Etosha National Park: including springbok, gemsbok, wildebeest, Burchell’s zebra, Hartmann’s mountain zebra, waterbuck, red hartebeest, giraffe, eland and the endemic black-faced impala. Elephant and lion frequently move between the Park and the Reserve, as do both black and white rhino. From Anderssons Camp, guests can also visit numerous springs and pans in search of lion, leopard, elephant, giraffe, red hartebeest, the endemic black-faced impala and black rhino, white rhino, as well as plains game such as wildebeest, zebra and springbok.

Birdlife around Anderssons Camp within the Ongava Game Reserve is prolific, with over 340 species to be seen – amongst them 10 of Namibia’s 14 endemic bird species. Specials like Short-toed Rock-Thrush, Bare-cheeked Babbler, Violet Wood-Hoopoe, Carp’s Tit, Hartlaub’s Francolin, Red-necked Falcon, the Sociable Weaver and its enormous communal nests, the miniature Pygmy Falcon and the brilliantly coloured Crimson-breasted Shrike – justifiably Namibia’s national bird – are sought-after prizes by birders. Others include Ostrich, the immense Kori Bustard and raptors like Greater Kestrel, Lanner Falcon and Pale Chanting Goshawk in abundance. In the Etosha National Park, on the open plains towards Okondeka, Namaqua Sandgrouse, Double-banded Courser, and Spike-heeled Lark can be seen. Acacia thickets can harbour Yellow-bellied Eremomela and Acacia Pied Barbet.