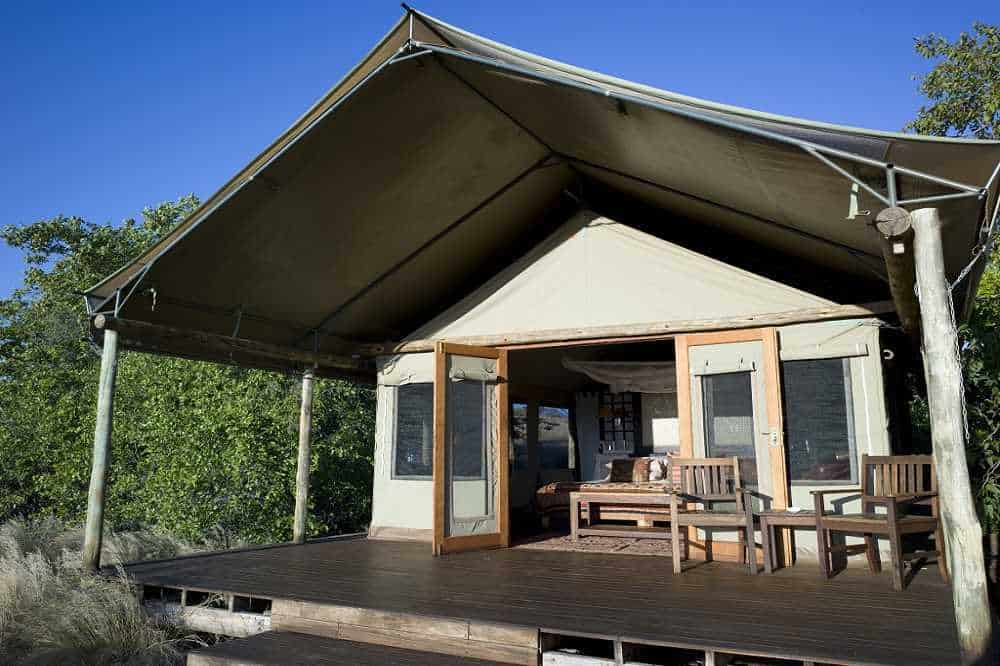 Desert Rhino Camp is situated in the 1-million-acre private Palmwag Reserve in northwest Namibia, between Etosha and the Skeleton Coast – few places on the planet can offer this level of privacy and wilderness experience. 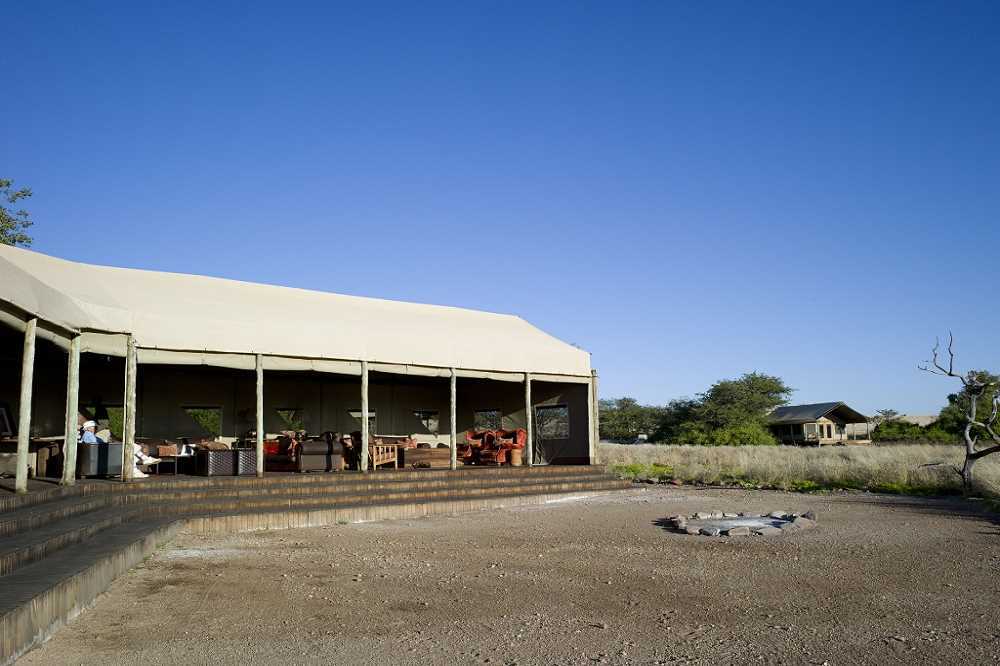 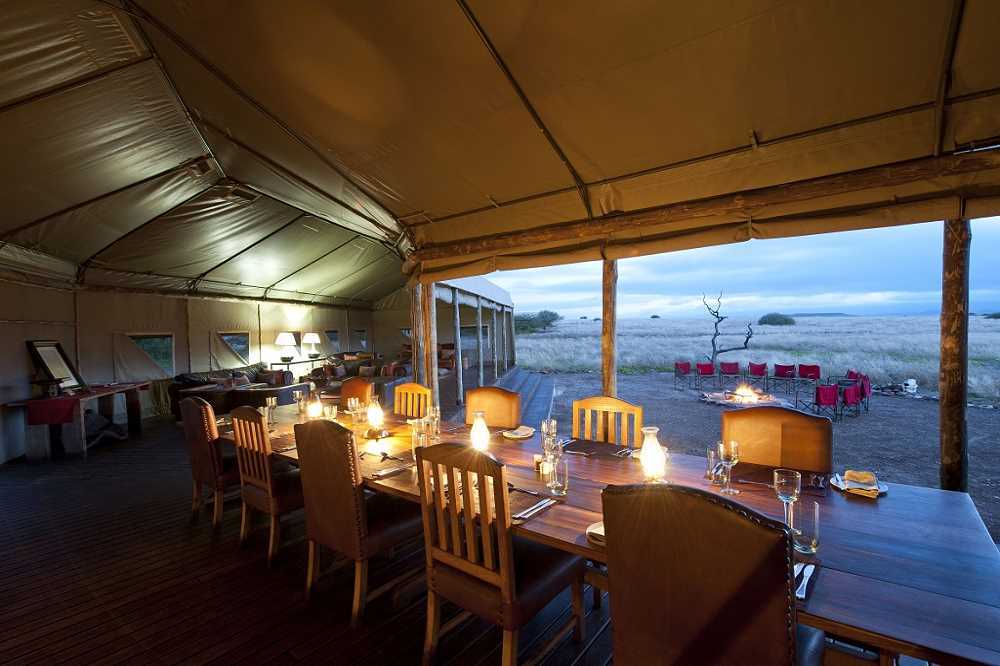 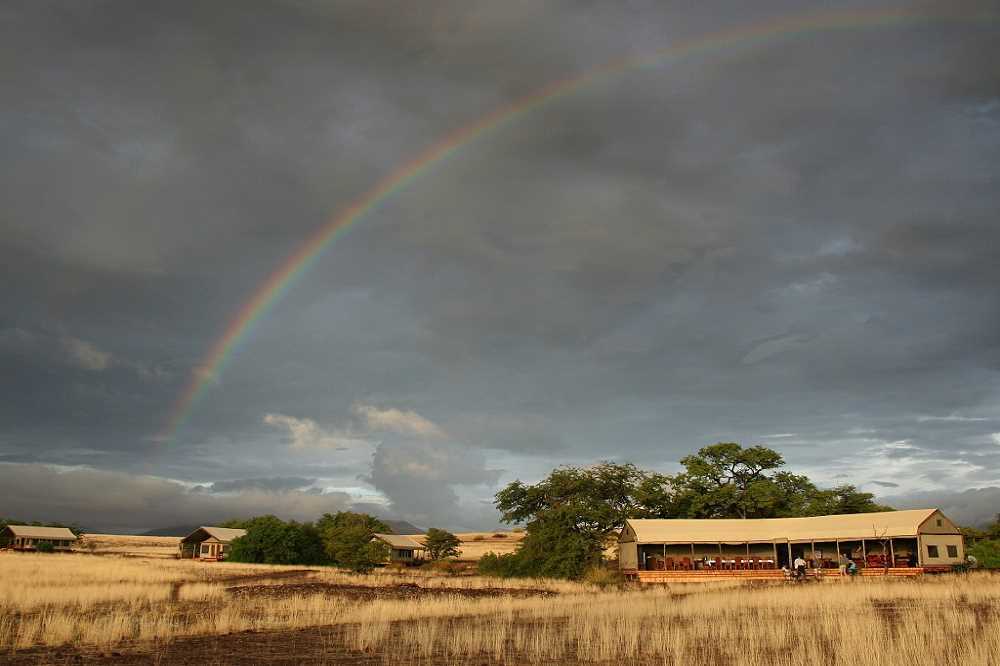 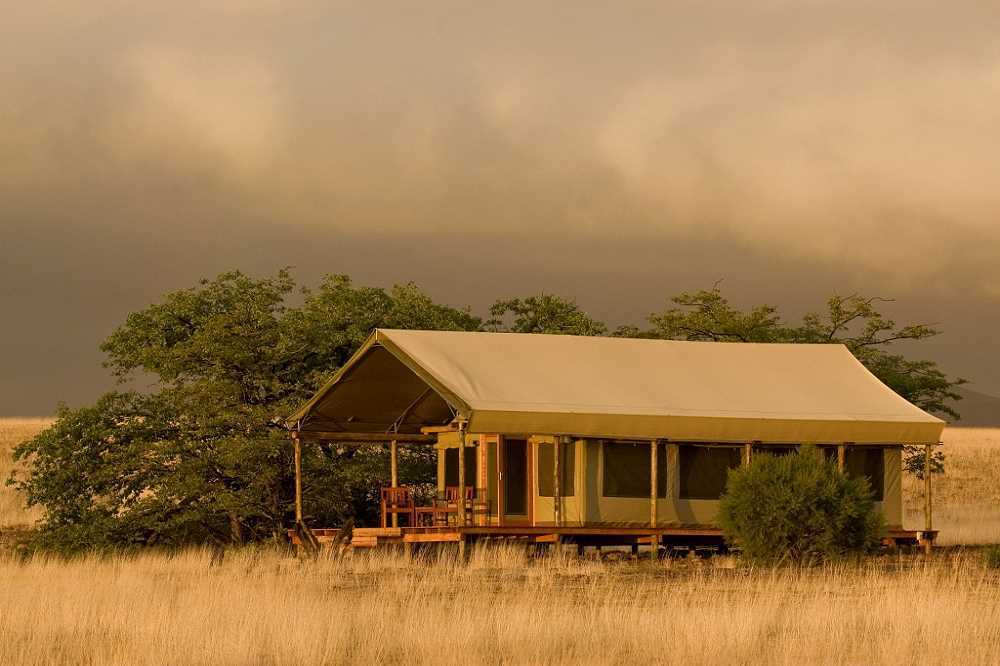 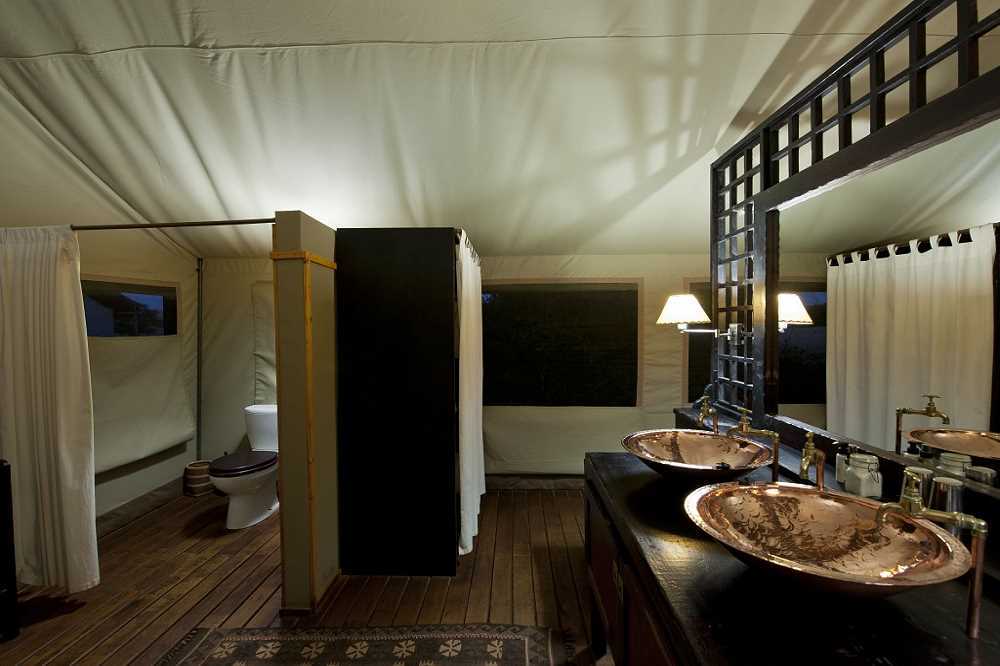 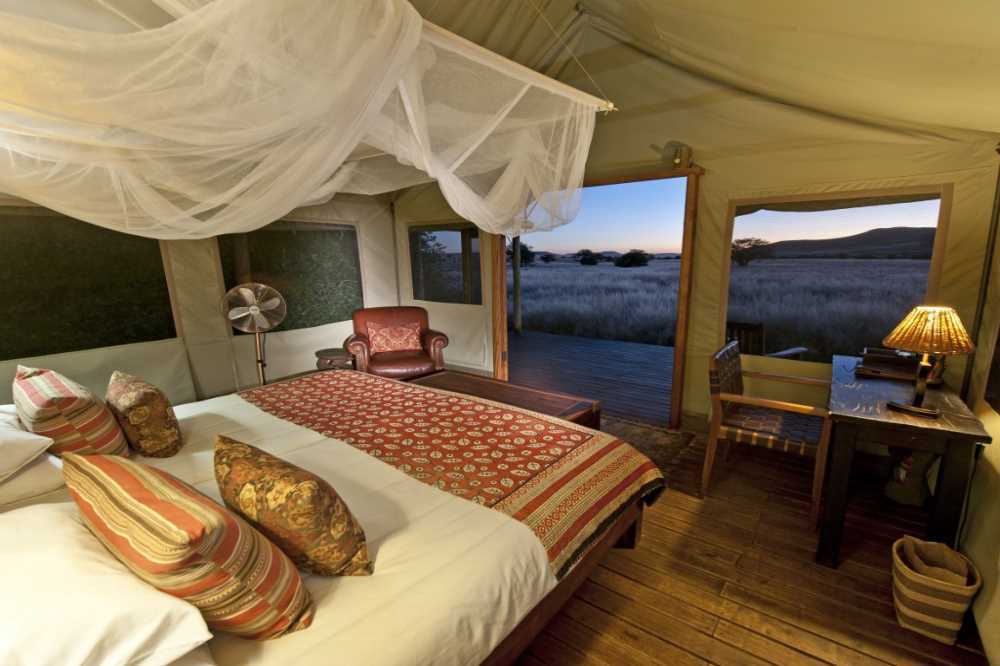 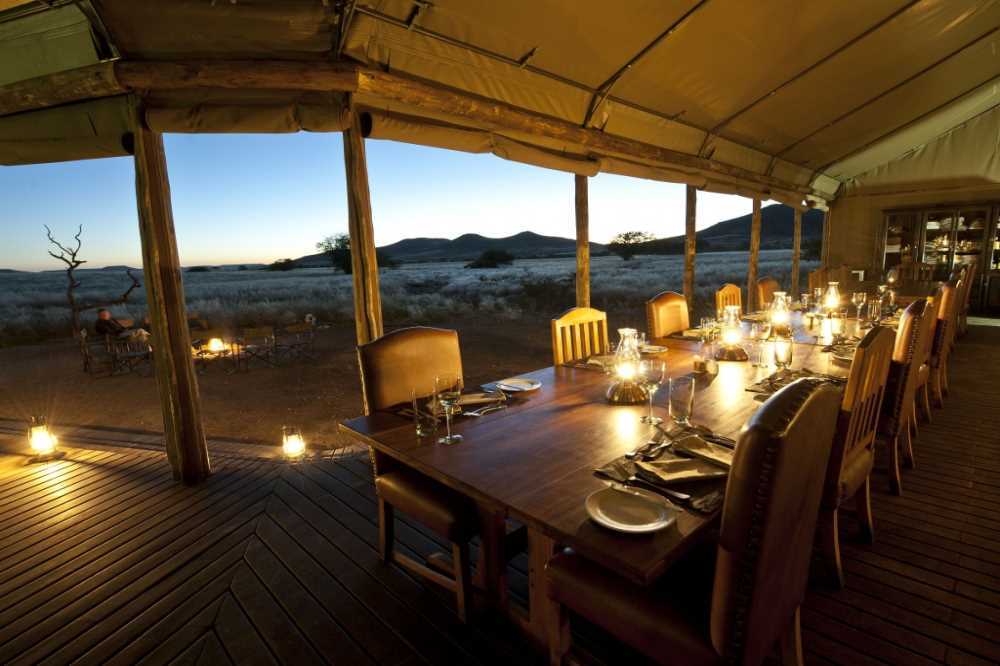 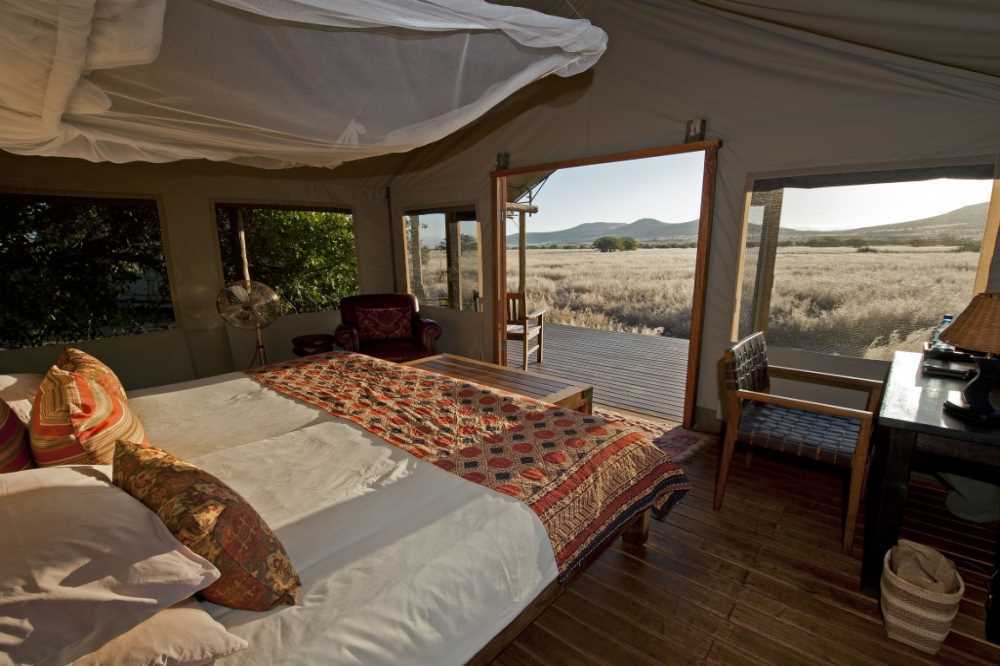 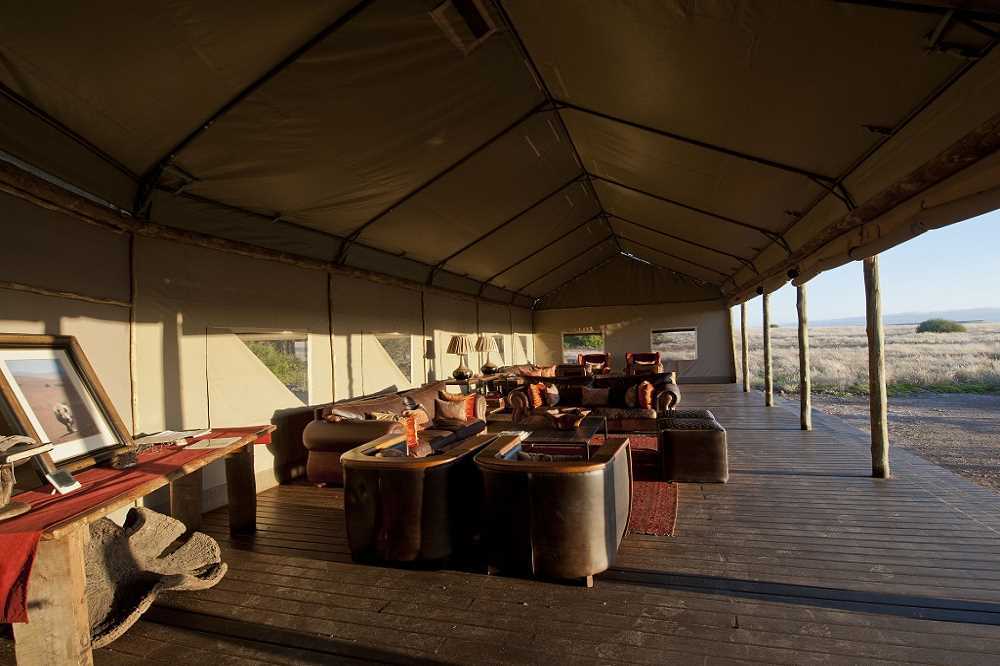 This desert reserve has a number of fresh water springs that support healthy populations of animals including desert adapted Back Rhino and Elephants as well as large populations of the rare Hartmann’s Mountain Zebra, Giraffe, Oryx, Springbok and Kudu. The predator population is the largest outside of the Etosha National Park with over 100 Lions, Cheetah, Leopard, Brown and Spotted Hyaena. Bird life is prolific and diverse with most of Namibia’s endemics present.

Desert Rhino Camp has eight large East African-styled “Meru” tents each with an en-suite bathroom comprising hand basin, flush toilet and a classic bucket shower that is filled with hot water whenever needed. The tented dining room offers uninterrupted views of the desert and mountains. Welwitschia (ancient desert adapted plants) plants dot the plain in front of the camp. The primary activity is rhino tracking which is usually by vehicle until a sighting is made by trackers and then on foot. Guests can also enjoy full day outings, with a picnic lunch, on the reserve.

The Camp is a joint venture between Wilderness Safaris and the “Save the Rhino Trust” – a non-profit conservation organisation that has been working in this area for 20 years. The Trust has been singly responsible for helping to ensure that these rare, desert adapted black rhino survived the slaughter that went on throughout other parts of Africa in the 80s and 90s. Today this population of black rhino is growing in numbers and the area boasts the largest concentration of rhino anywhere on the planet outside of a national park. Community game scouts who were employed by the Trust to help with the patrolling and monitoring all these years are now seconded to the camp and are the trackers and guides. A portion of every guest’s revenue goes to the Trust.

There are large populations of Hartman’s mountain zebra, giraffe, oryx, springbok and kudu. The predator population is the largest outside of the Etosha National Park with over 100 lions, cheetah, leopard, brown and spotted hyena. Bird life is prolific and diverse with most of Namibia’s endemics present. This concession supports a healthy population of desert adapted black rhino and elephants.