Palmwag Lodge is nestled amongst the tall, swaying palms of a desert oasis on the banks of the dry Uniab River in Damaraland in the Kunene Region of north-western Namibia. The lodge is one of Namibia’s oldest and most popular tourist destinations, recognized internationally for its spectacular scenery, the host of incredible desert-adapted wildlife in close proximity, and the exciting possibility of encountering the endangered black rhino. 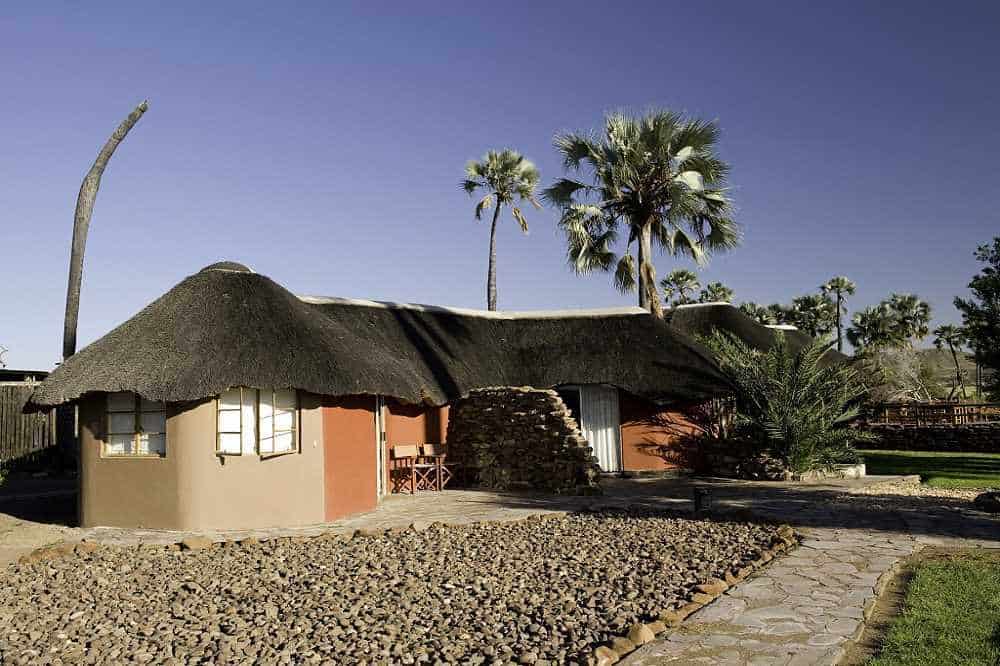 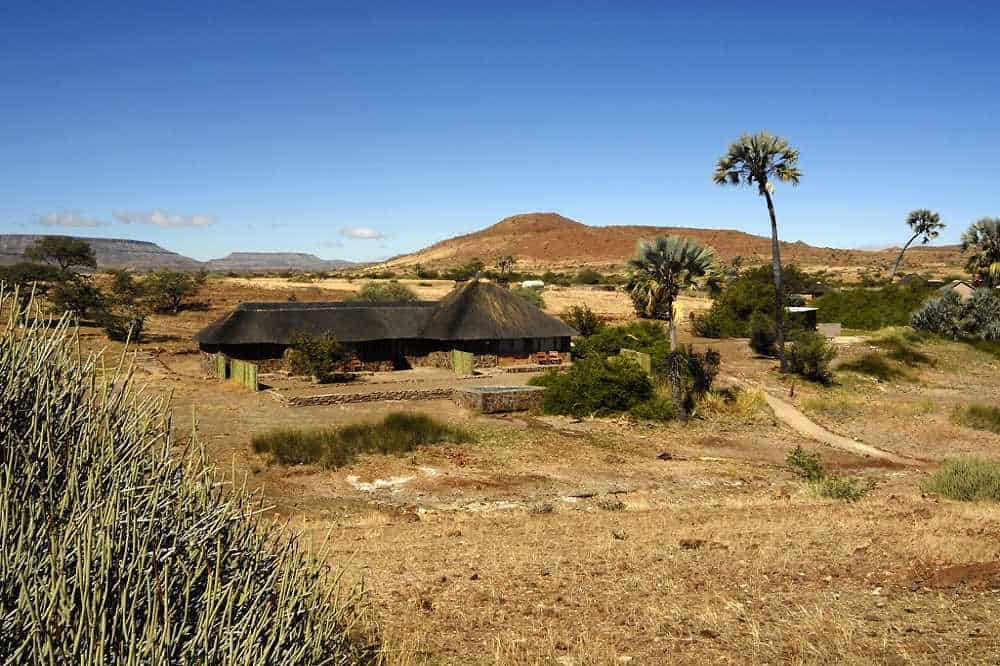 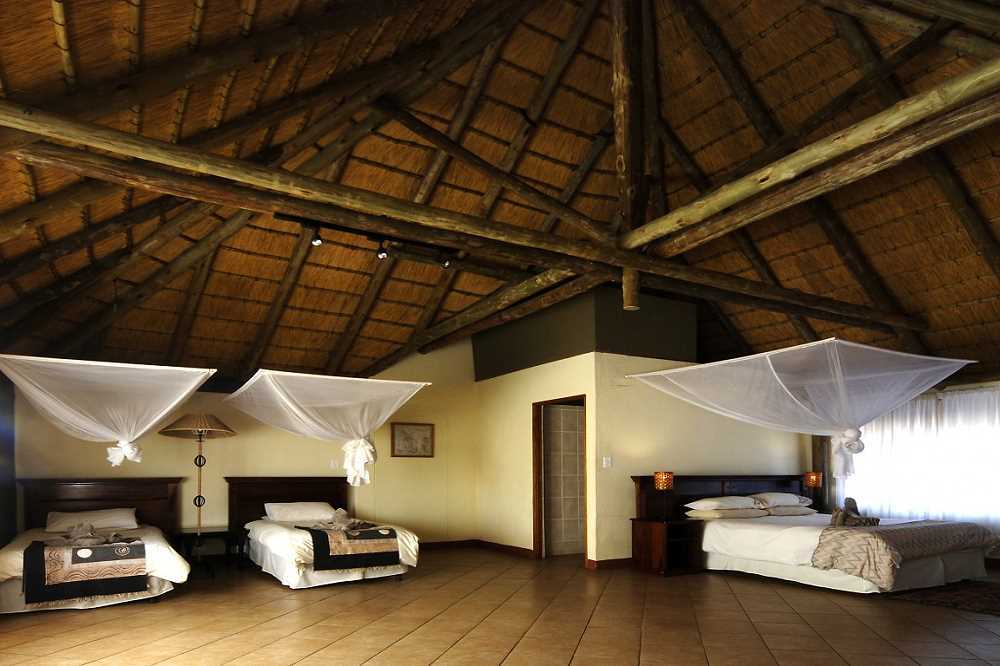 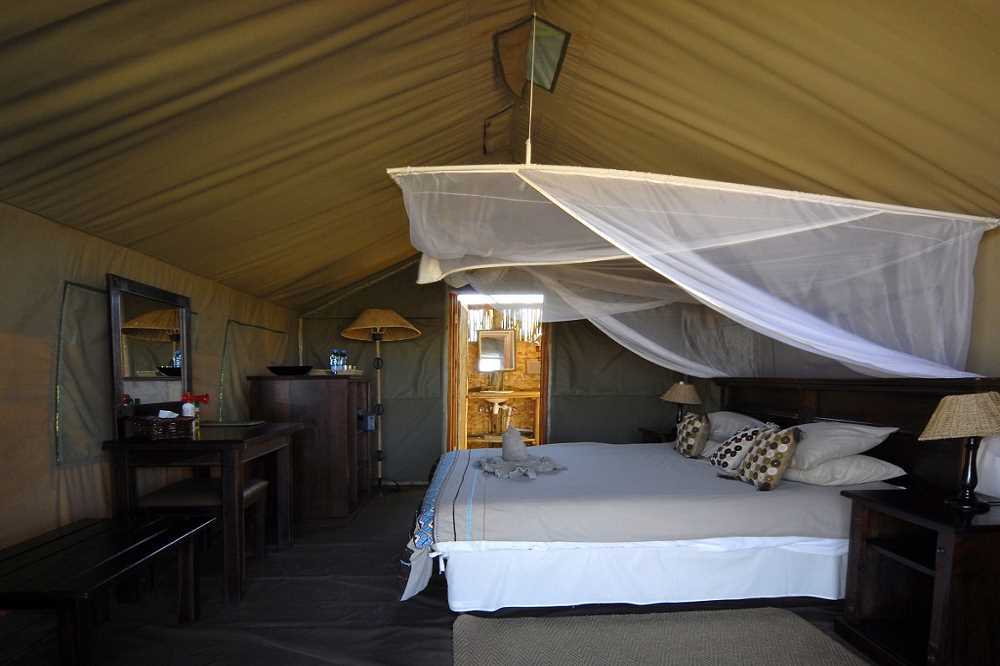 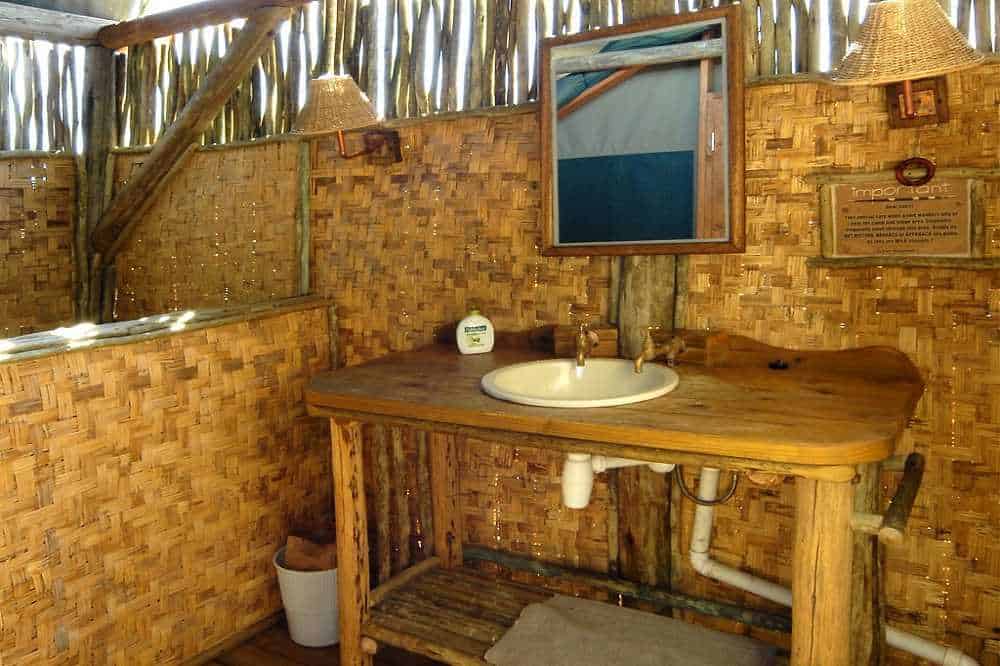 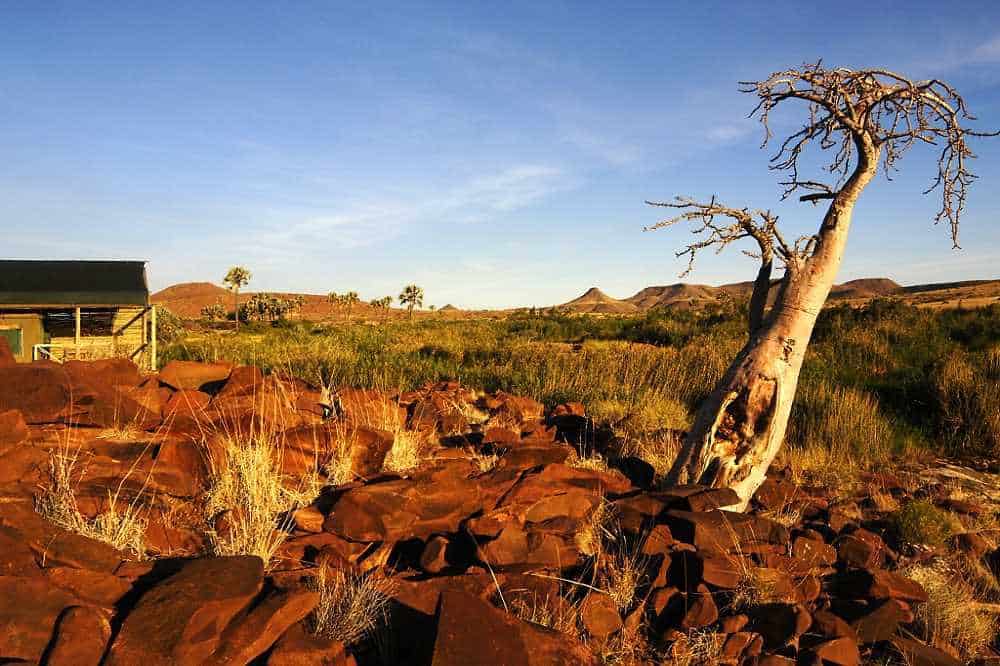 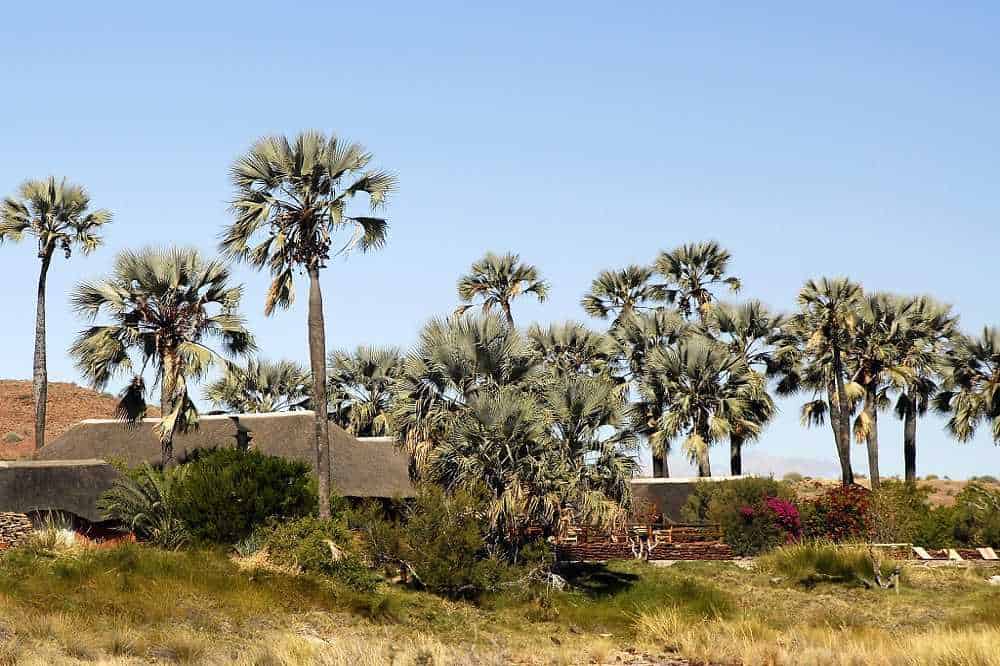 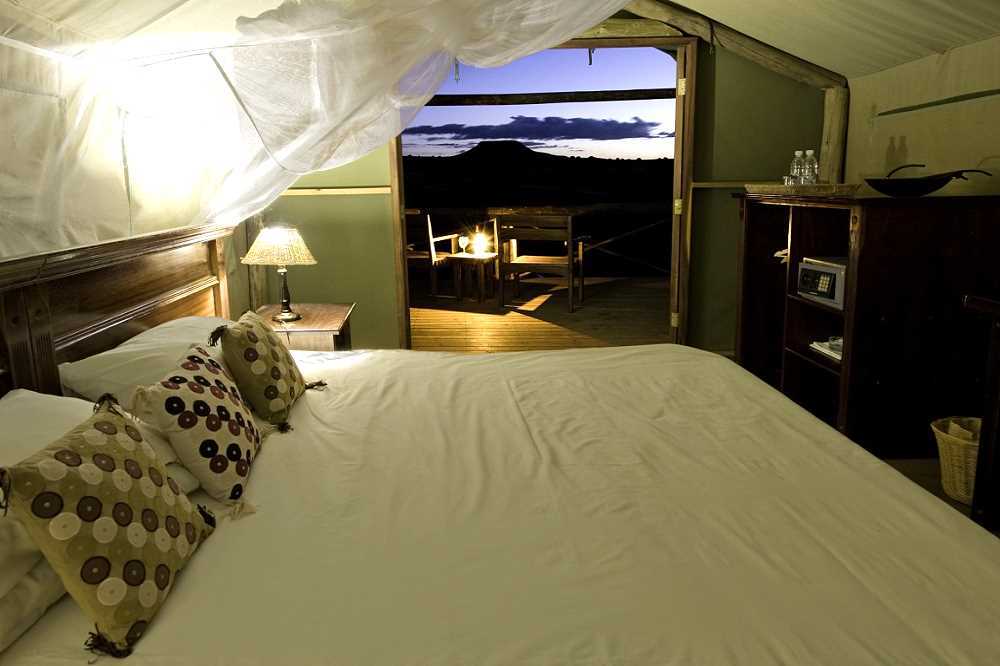 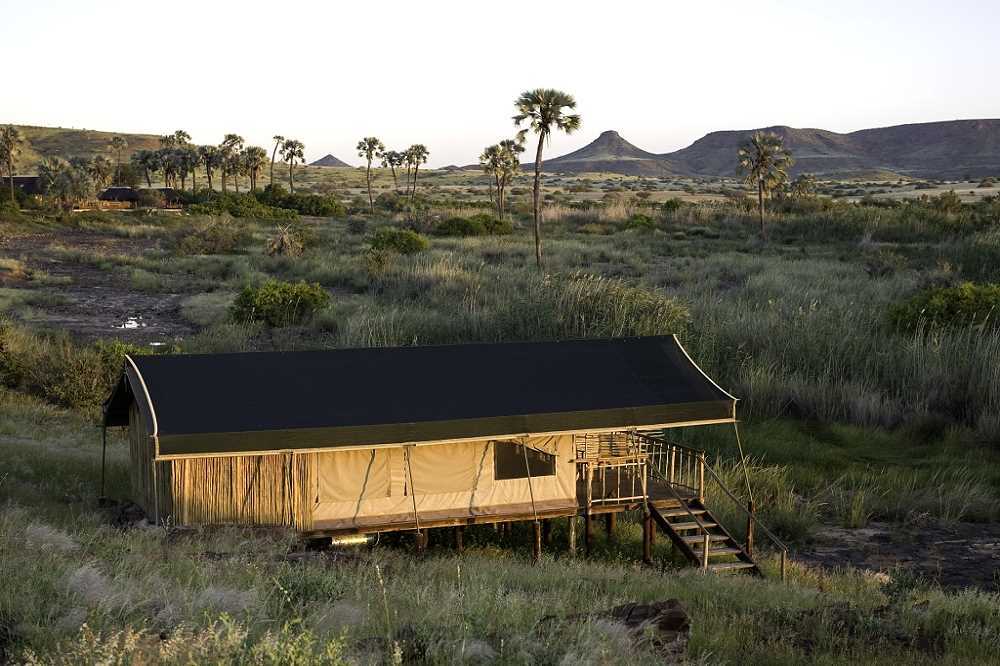 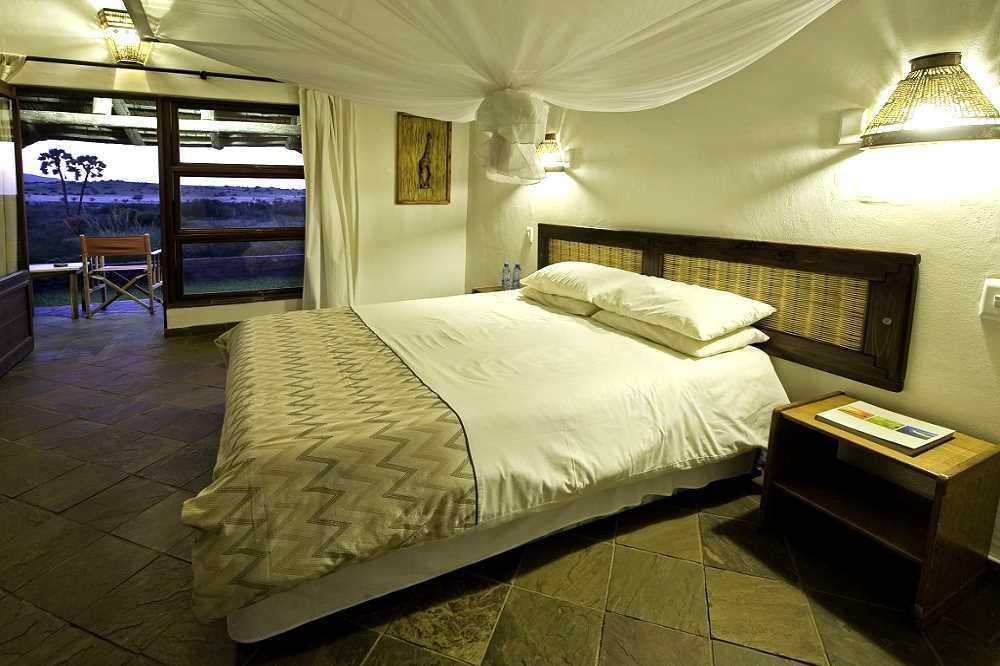 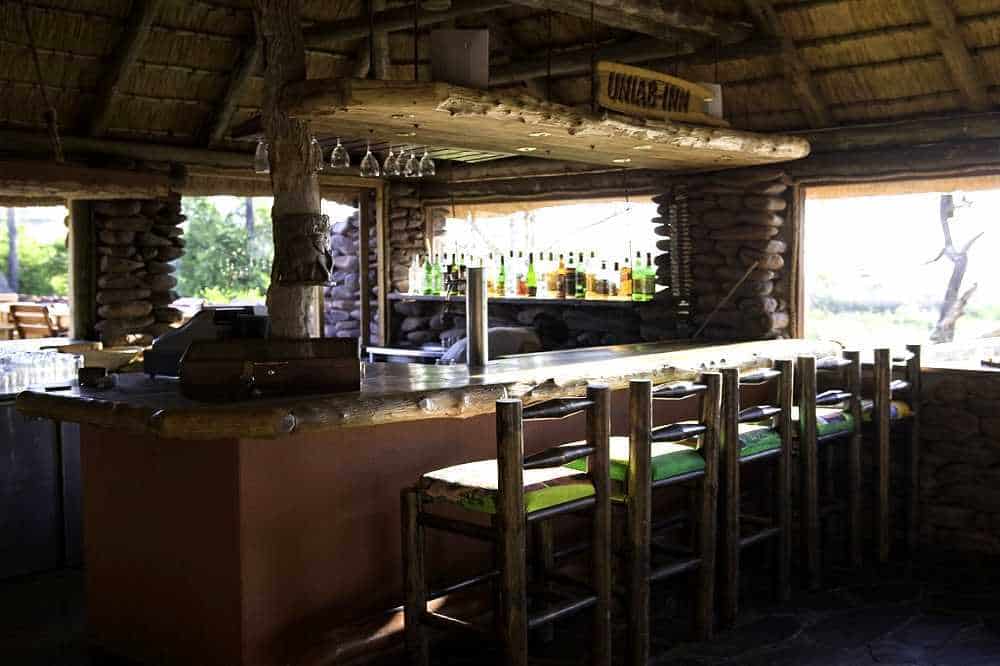 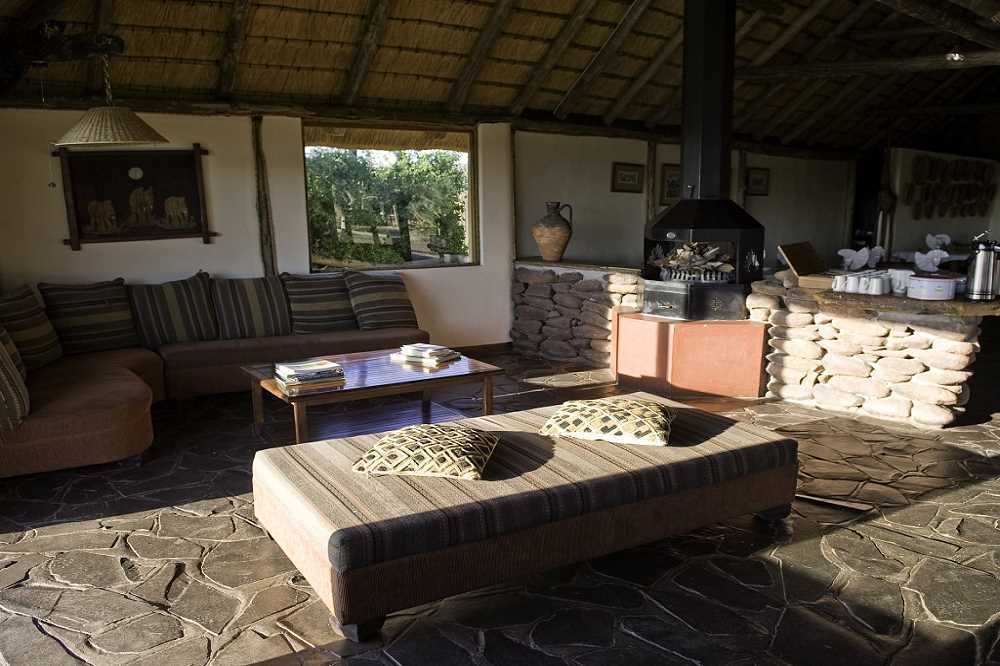 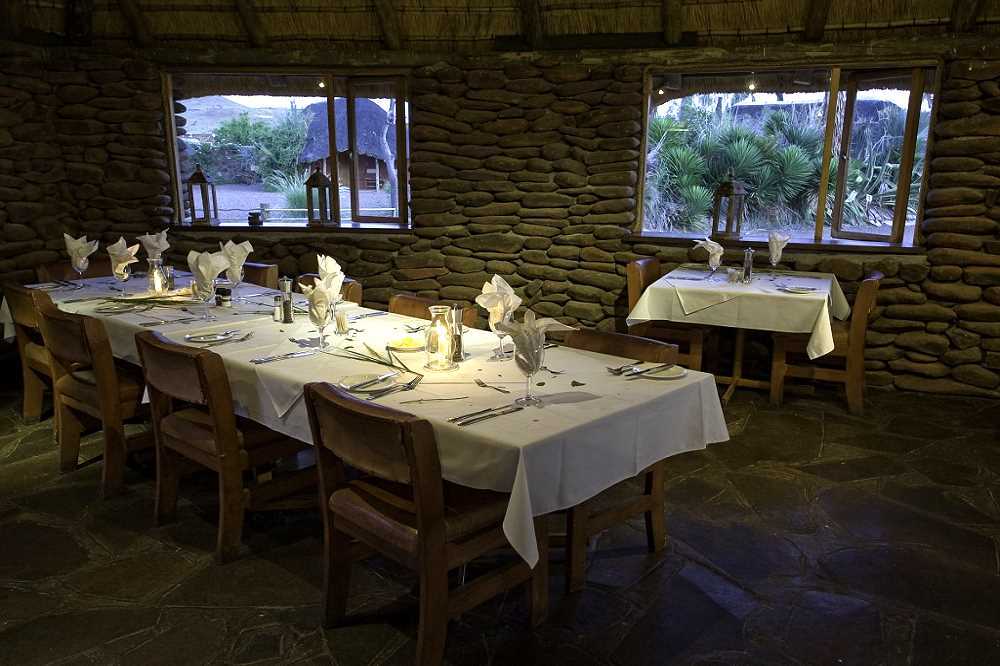 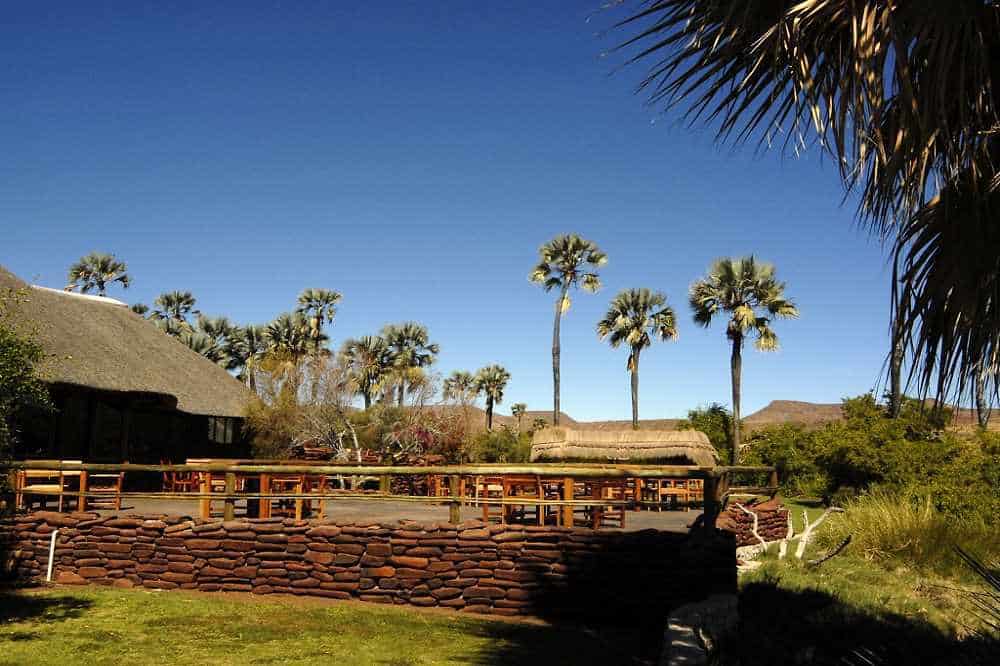 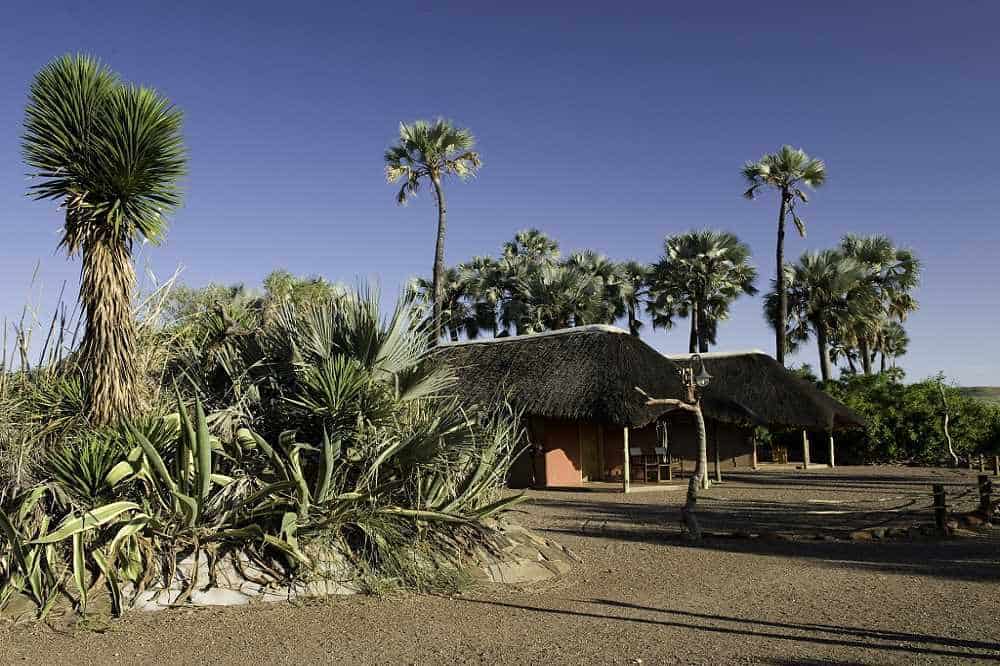 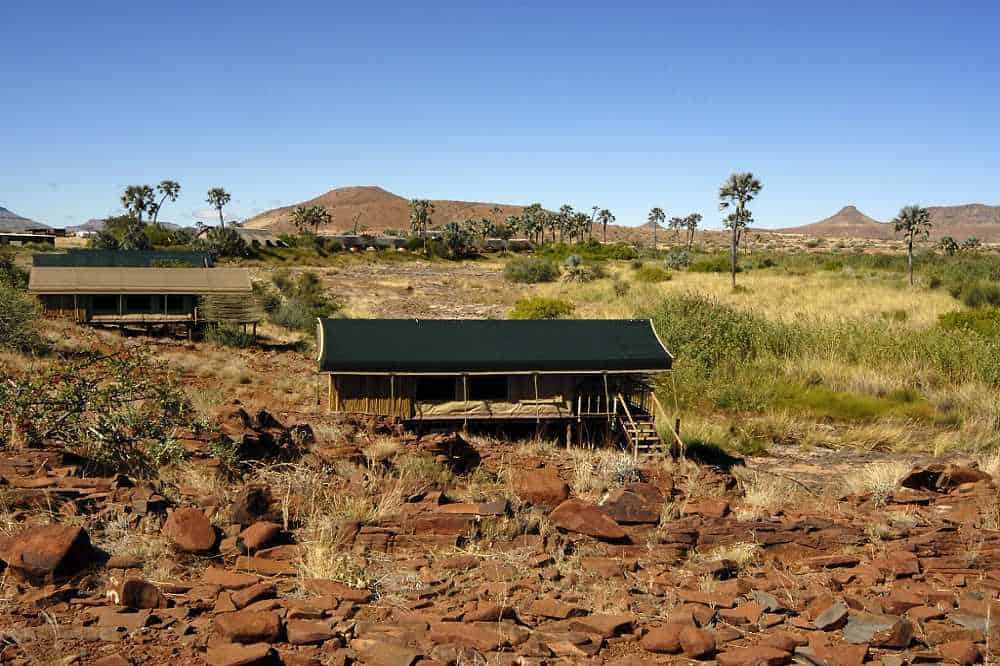 Accommodation at Palmwag Lodge consists of tasteful thatched bungalows (2 bed & 4 bed) and luxury canvas tents (2 bed & one double-bed honeymoon suite), all with en-suite facilities and furnished with insect repellant. Intrepid explorers can take advantage of the 9 camp sites located nearby.

The lodge boasts an ‘a la carte’, licensed restaurant under thatch as well as a quaint bar and lapa at the swimming pool.

Activites at Palmwag Lodge revolve around daily game drives in open 4x4s into the vast 450,000 hectare Palmwag Concession and its surprising array of arid-adapted wildlife. A trip to the nearby Ovahimba village is an option where guests can experience first hand the daily life of these desert nomads – who still live by their ancient cultural traditions and rituals. A series of guided nature walks for the intrepid is also on offer.

Large populations of Hartman’s Mountain Zebra, giraffe, oryx, springbok and kudu exist within the Palmwag Concession. A healthy population of elephants and desert adapted black rhino, under the management of the Save the Rhino Trust (SRT), move freely around the concession. The predator population is the largest outside of the Etosha National Park, with over 100 lions, cheetah, leopard, brown and spotted hyena.

Bird life is prolific and diverse around Palmwag, with most of Namibia’s endemics present.

In the Palmwag Concession Wilderness Safaris works closely with the Save the Rhino Trust (SRT), a highly respected NGO almost single-handedly responsible for the preservation of desert-adapted black rhino in the area. The SRT focuses on the protection, monitoring and understanding of the local black rhino population and is funded by both donations and partnerships.

As the rhino numbers in the area shrank to near extinction, the SRT was formed to stop the indiscriminate hunting that was taking place within the Palmwag Concession. Community game scouts were employed by the SRT to help with the patrolling and monitoring of the remaining rhino. Ironically many of these new scouts were previously convicted poachers from within the local community – their extensive knowledge of the habits and movements of rhino in the wild proving absolutely invaluable! Around 30 trackers now monitor over 100 desert-adapted black rhino.

Today this program is a major success and is responsible for the wellbeing of a very unique sub-species of black rhino – differing even from other populations found within this sub-region. Wilderness Safaris’ partnership with the SRT and Namibia’s Ministry of Environment and Tourism has meant that the black rhino population in this area is now able to sustain relocations of founder individuals to surrounding areas on communal land. Since the founding of the SRT poaching has drastically declined and the rhino population has more than doubled. One of our staff has even been awarded an MSc degree in black rhino habitat.

In a decisive move, Wilderness Safaris has seconded these vastly experienced community game scouts to Palmwag Lodge and Desert Rhino Camp as trackers and guides. They posses an inconceivable wealth of knowledge on the behaviour of the rhino, conservation methodology and the wondrous desert-adapted fauna & flora of the region. Their incredible insights often prove life-changing for many guests.

The overall success of Wilderness Safaris and the SRT’s efforts, as well as the enthusiastic support of the local community and neighbouring farms, is a testament to an exciting new era in the evolution of the human spirit and wildlife conservation.

The Palmwag Lodge Concession is a 450,000 hectare conservancy in Damaraland in the Kunene Region of north-west Namibia. Considering the proximity of the concession to the Skeleton Coast Park and true Namib Desert, this area is home to a rich diversity of wildlife.

Early morning fog generated by the icy Benguela Current in the Atlantic Ocean meeting the warm desert air of the Skeleton Coast drifts inland over the Namib Desert – providing precious water to the flora and fauna in this incredibly harsh environment. Adaptation to the desert environment is the miracle of all that survives here in the Palmwag Concession.

The Etendeka Mountains dominate the scenery – impressive flat-topped outcrops coloured ochre-brown. Dry river-courses like the Uniab River cut through the landscape and occasionally fill with water. The terrain is rocky but often covered with fine golden grasses and interspersed with large Euphorbia damarana bushes, which are endemic to the area. Other fascinating plants in the Palmwag Concession include the odd-shaped bottle tree, shepherd’s trees, ancient leadwoods, salvadora bushes and unique welwitschias.

Birding enthusiasts are sure to enjoy the diverse avifauna found in the Palmwag Concession. Raptors include Greater Kestrel, Lanner Falcon and Booted Eagles, spotted in the sky or perching on a lonely shepherd’s tree. Out on drives, it is possible to see Namaqua Sandgrouse, Burchell’s Courser, the colourful Bokmakierie, Grey-backed Sparrowlark, Monteiro’s Hornbill and White-backed Mousebird. Other regular endemics include Rüppell’s Korhaan, Benguela Long-billed Lark and possibly Herero Chat with some focused searching. Verreauxs’ Eagle is often sighted around rocky hillsides.