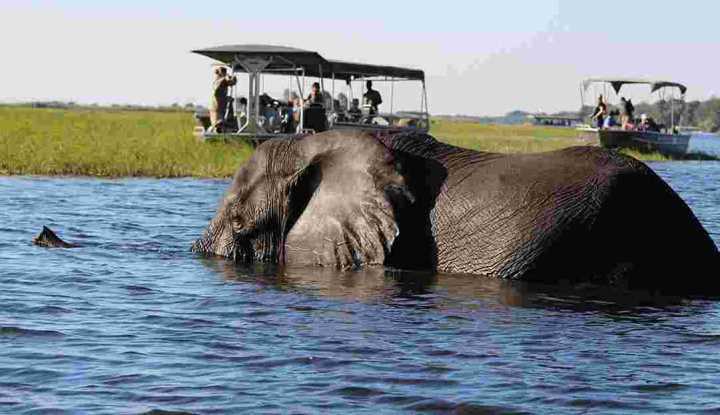 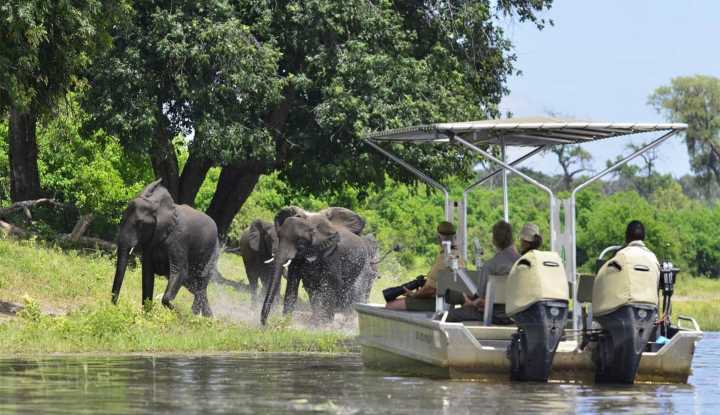 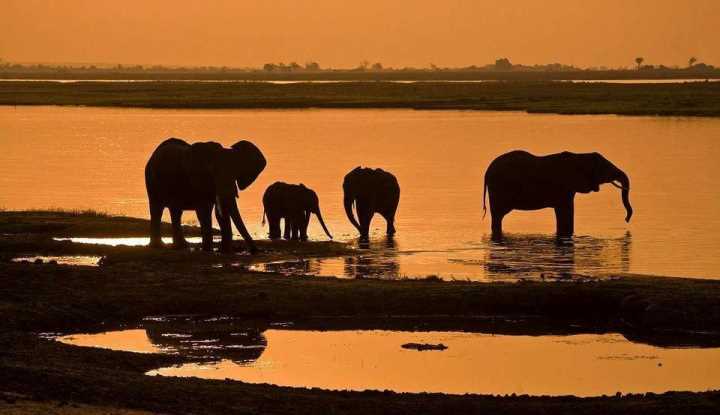 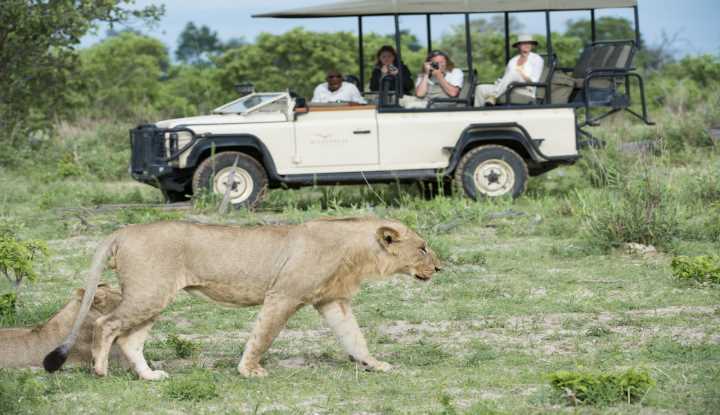 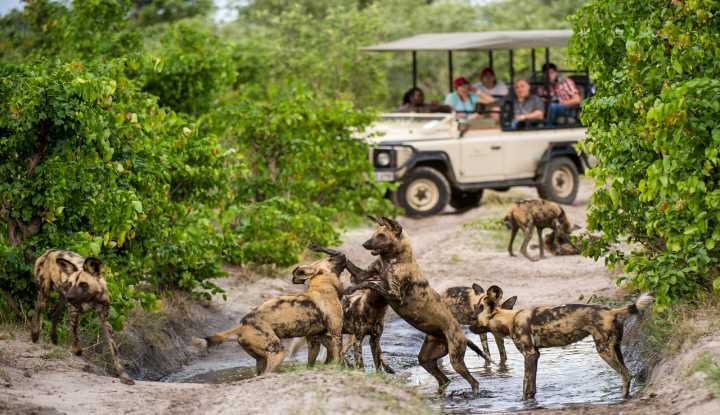 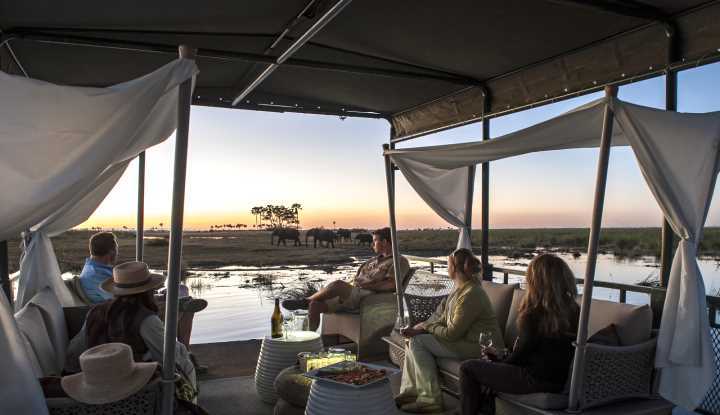 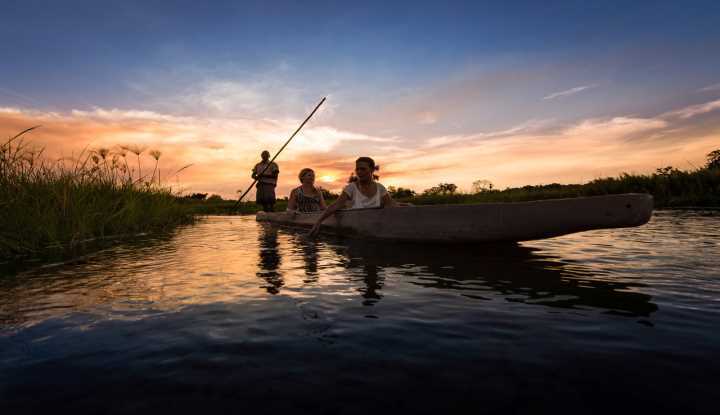 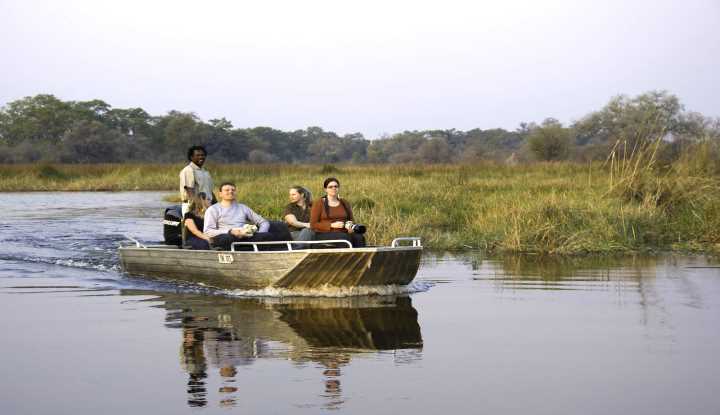 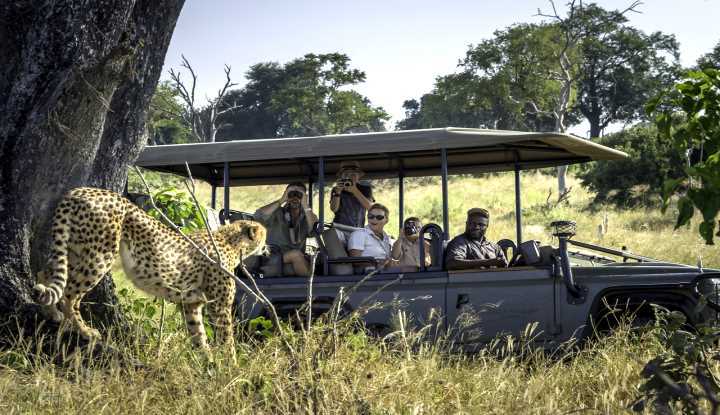 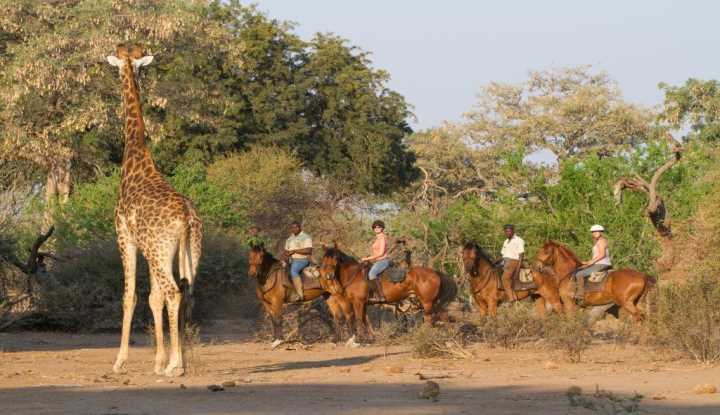 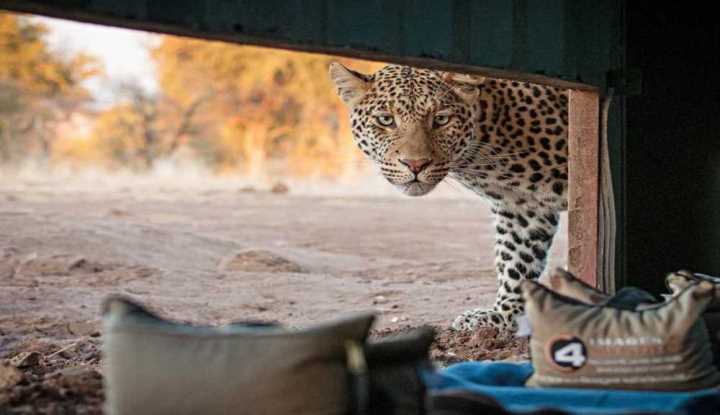 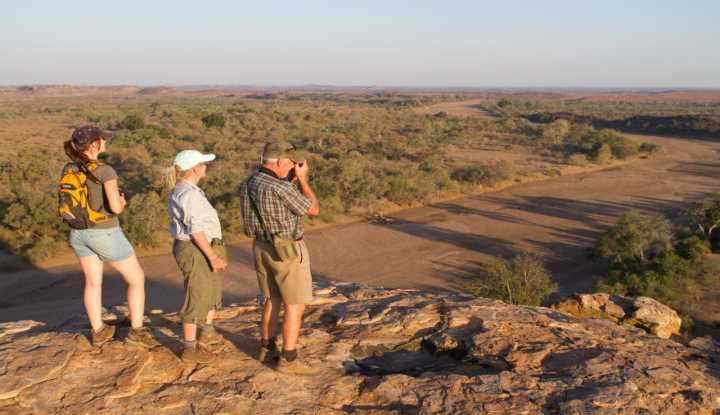 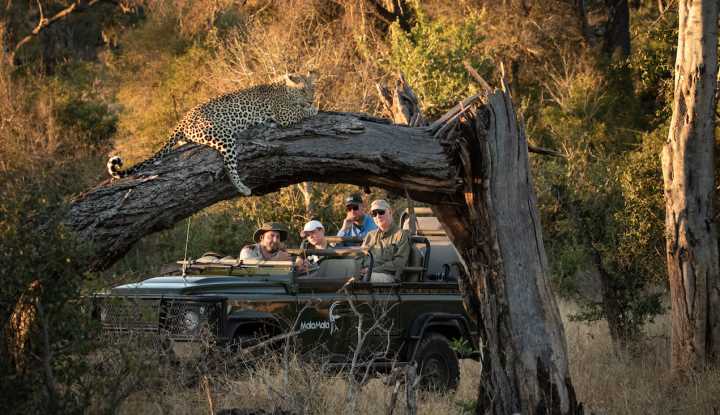 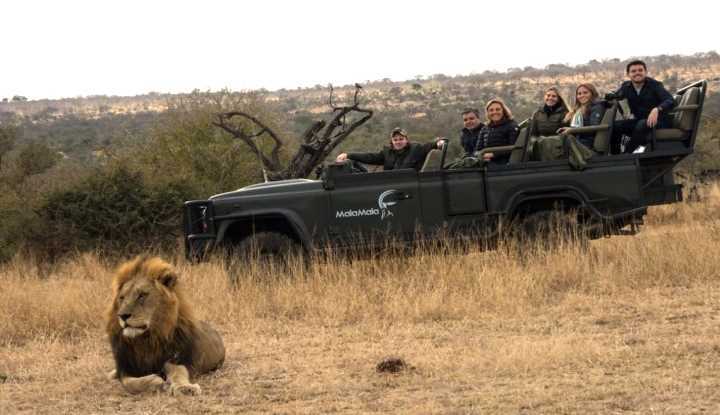 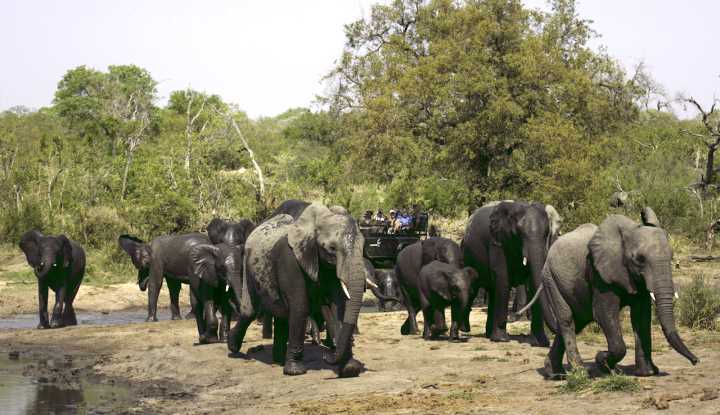 The Ultimate African Safari is not just about seeing The BIG 5, it’s about experiencing the different eco-regions that Southern Africa has to offer. See the wildlife from varying perspectives, how they adapt and survive and last but not least, the incredible beauty of these stunning eco-systems each with it’s own uniqueness.

The river begins its existence as a small mountain spring in Angola, where it is known as the Kwando (a Hambukushu name). From here, it travels great distances through the Kalahari sands before it reaches Botswana and becomes the Linyanti (a Subiya name).

It finally becomes the Chobe at the border post of Ngoma, from where it continues to run along Botswana’s northern border before meeting the mighty Zambezi and tumbling over the precipice at Victoria Falls. The Chobe’s course, like the Okavango and the Zambezi River, is affected by fault lines which are extensions of the Great Rift Valley.

By the time the river reaches the national park’s northern border, it has become a broad, twisting mass of water that snakes its way through swampland and is interspersed by a number of lush, green islands.

This section of the river attracts an almost unbelievable density of game, including huge herds of elephant (which can often be seen crossing the river) and buffalo, as well as countless hippos and crocodiles. The birdlife is extraordinary too, particularly in the wetter summer months. The wide banks and lush grass attract rare antelope such as red lechwe and puku to the water’s edge. The river is also home to over 90 species of fish.

But even without all the wildlife and birdlife, the Chobe River is undoubtedly one of the most picturesque and tranquil places in Africa in its own right.

The Okavango Delta is a labyrinth of lagoons, lakes and hidden channels covering an area of over 17,000 square km and the largest inland delta in the world. Trapped in the parched Kalahari sands it is a magnet for the wildlife who depend on the permanent waters of this unique feature.

Sometimes called a ‘swamp’, the Okavango is anything but. Moving, mysterious, placid, gentle and beautiful, from a wide and winding channel it spreads through tiny, almost unnoticeable channels that creep away behind a wall of papyrus reed, into an ever expanding network of increasingly smaller passages.

These link a succession of lagoons, islands and islets of various sizes, open grasslands and flooded plains in a mosaic of land and water. Palms and towering trees abound, throwing their shade over crystal pools, forest glades and grassy knolls.

The Okavango’s water is remarkably clean and pure and this is almost certainly due to the fact that it passes through very sparsely populated areas on its journey from Angola. Despite this, a staggering 660 000 tons of sediment a year are delivered to its great alluvial fan.

In the lush indigenous forests of the delta and its islands, and along the floodplains spawned by this great marriage of water and sand, more than 400 species of birds flourish.

On the mainland and among the islands in the delta, lions, elephants, hyenas, wild dog, buffalo, hippo and crocodiles congregate with a teeming variety of antelope and other smaller animals – warthog, mongoose, spotted genets, monkeys, bush babies and tree squirrels.

A place of woodland and unusual watercourses, the Linyanti in northern Botswana boasts the famous Savute Channel, an ancient and sporadic watercourse attracting abundant wildlife, and the productive Linyanti River. This area is famous for its huge concentrations of elephant in the dry season and big game viewing year round.

Along the Linyanti fault line, there are varied woodland habitats and ancient floodplains, hosting abundant wildlife and making the Linyanti an essential part of any Botswana itinerary.

Wedged between Zimbabwe and South Africa, the Tuli Block is a corner of Botswana quite unlike the rest of the country. Home to the confluence of the Shashe and Limpopo Rivers and close to the Mapungubwe World Heritage Site in South Africa, it’s a region of dramatic rocky scenery, towering baobab trees and thick riverine forest, with much of it held under private ownership.

Wildlife is prolific here – visitors on a Tuli Block safari can expect to see many species of antelope and there are large numbers of elephant, lion, leopard and cheetah. The Tuli Block is also one of Southern Africa’s bird watching hot spots with at least 350 species recorded.

MalaMala Game Reserve is the Safari Industry’s blueprint to the luxury photographic safari. This enormous tract of land offers unparalleled wildlife viewing. MalaMala is the only game reserve in this region where the benefits of tourism directly support adjacent communities.

“Not even Tanzania’s famed Serengeti Game Reserve or the awesome Ngorongoro Crater fills your camera viewfinder faster with Africa’s legendary Big Five – at MalaMala, lion, leopard, buffalo, rhinoceros and elephant appear magically,” says acclaimed wildlife photojournalist Geoff Dalglish in his Sunday Times review. “Nor could Hollywood script the wide-screen wildlife encounters any more dramatically or frequently than nature does routinely in the private game reserve that is arguably South Africa’s most famous internationally.”

Upon arrival at ORT International Airport in Johannesburg, South Africa you will be met by your hosts, Mark and Celeste, who will then assist in your check-in at the InterContinental Johannesburg O.R. Tambo Airport Hotel for the night. This evening you will be treated by Mark and Celeste to an African Dinner at the nearby Tribes Restaurant.

This morning you will check-in for your scheduled flight to Kasane, Botswana where you will be met and then transferred to the lodge (or houseboat) of your choice for 2 nights on a full board basis including all activities.

Please see Chobe National Park for a choice of lodges and houseboats.

This morning after your activity and breakfast you will be transferred back to Kasane for your light aircraft transfer to the camp of your choice in the Linyanti Wildlife Reserve for 3 nights on a full board basis including activities.

Please see the Linyanti Wildlife Reserve and Savuti Channel for a choice of Camps.

This morning after your activity and breakfast you will be transferred by light aircraft to the camp of your choice in the Okavango Delta for 3 nights on a full board basis including activities.

Please see the Okavango Delta for a choice of Camps.

This morning after your activity and breakfast you will be transferred by light aircraft to Maun where you will connect with your light aircraft transfer to Mashatu Game Reserve in the Tuli Block for 3 nights on a full board basis including activities. Extra activities can be pre-booked such as the Hide.

This morning after your activity and breakfast you will be transferred by light aircraft to Mala Mala Game Reserve for 3 nights on a full board basis including activities.

This morning after your activity and breakfast you will be transferred by light aircraft back to ORT International Airport in Johannesburg.

Being in close proximity to the Chobe National Park, Victoria Falls is well worth spending 1 or 2 nights exploring the Majestic Falls and its surrounds before the start of your Safari. From ORT International Airport in Johannesburg you will fly into Livingstone where you will be met and then transferred to the hotel/lodge of your choice. A number of activities are on offer. 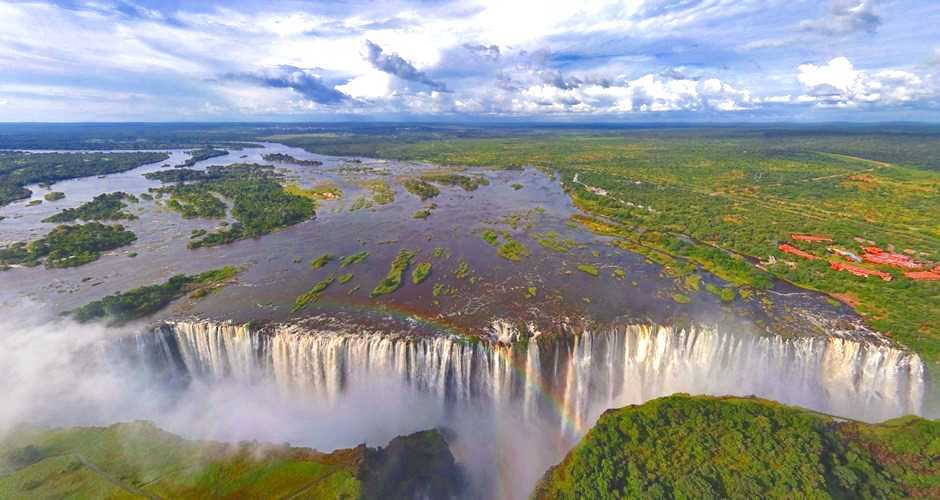 Please see Victoria Falls for a choice of hotels/lodges and activities.

At the end of your Safari at Mala Mala it is an easy flight from Skukuza Airport in the Kruger National Park to Cape Town. Spend any number of nights you wish in the numerous hotels and choose from various private tours we have on offer. 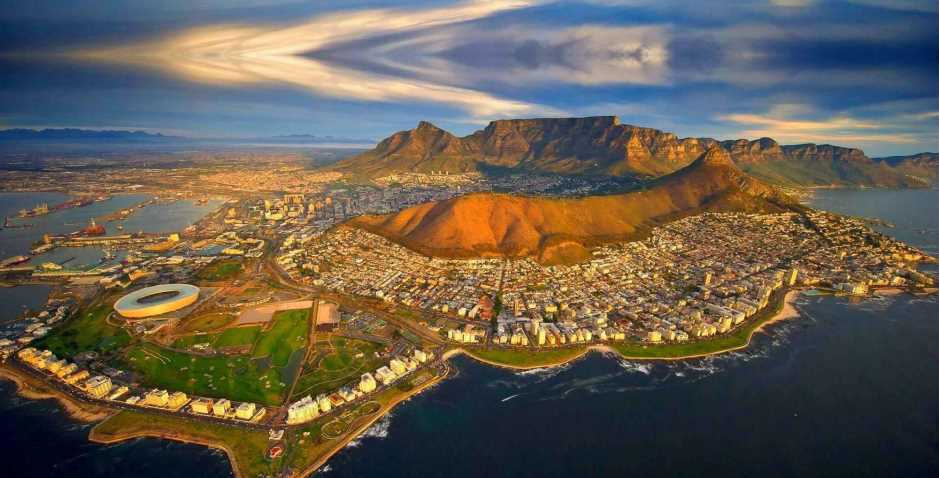