Mombo Camp in the Okavango Delta

Mombo Camp is situated on Chief’s Island in the Moremi Wildlife Reserve and has very large concentrations of plains game and predators and is one of the best places in Africa for Wildlife Sightings. 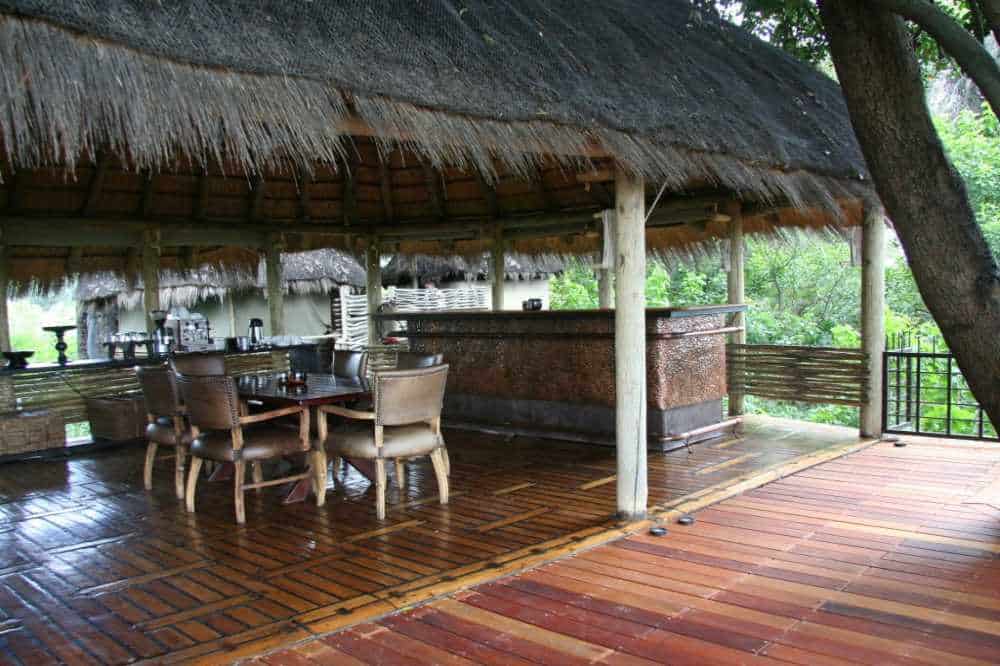 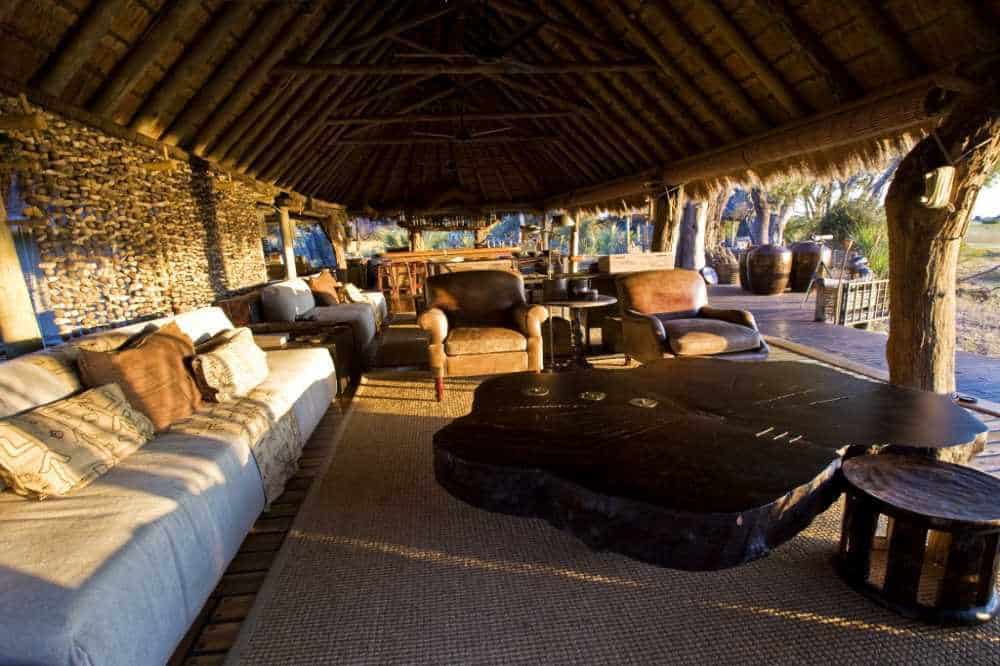 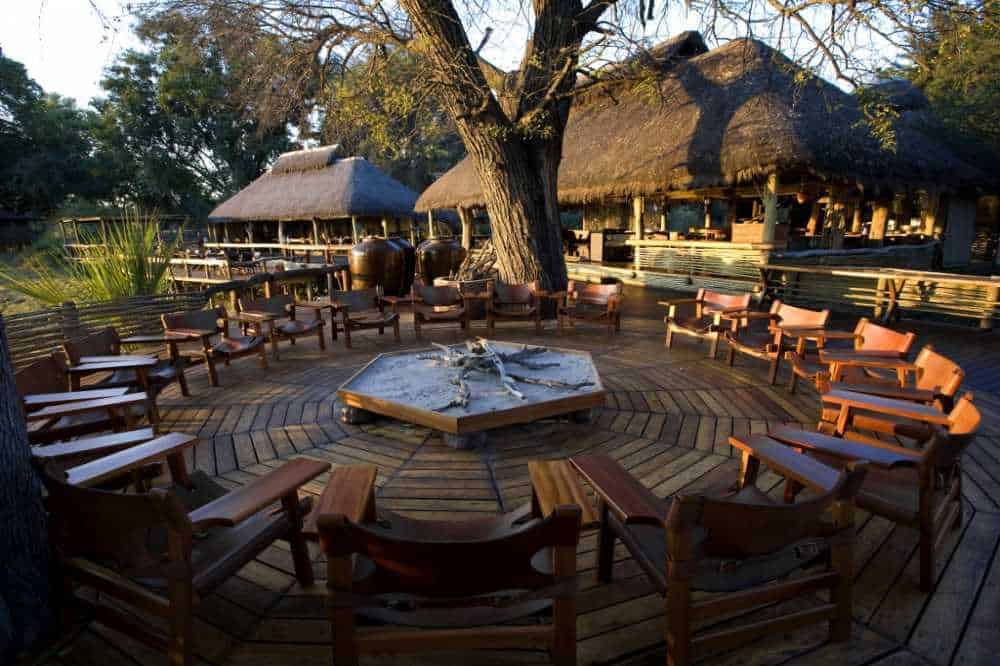 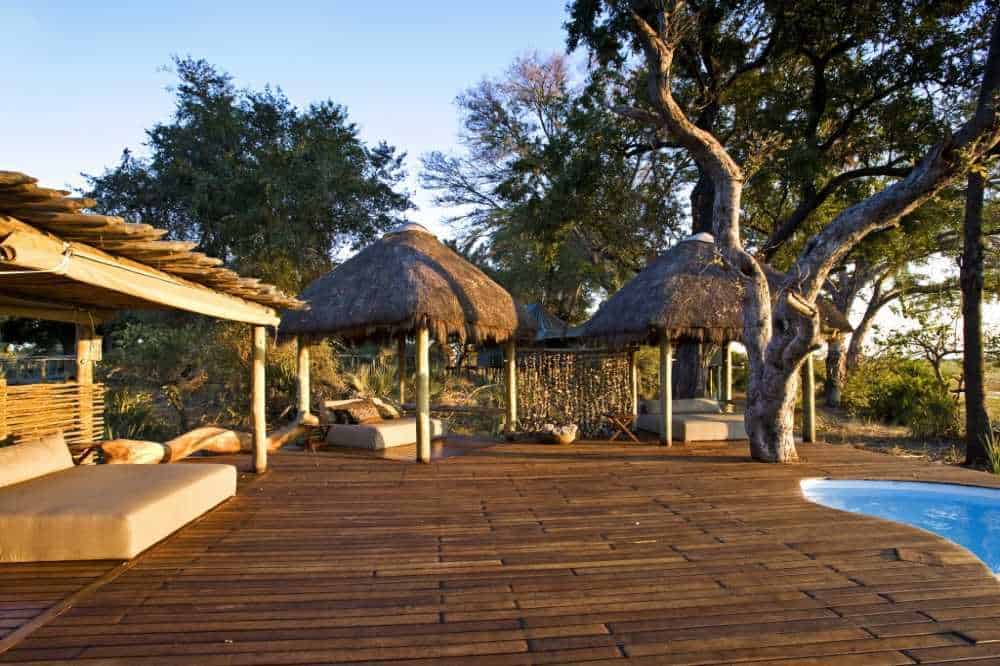 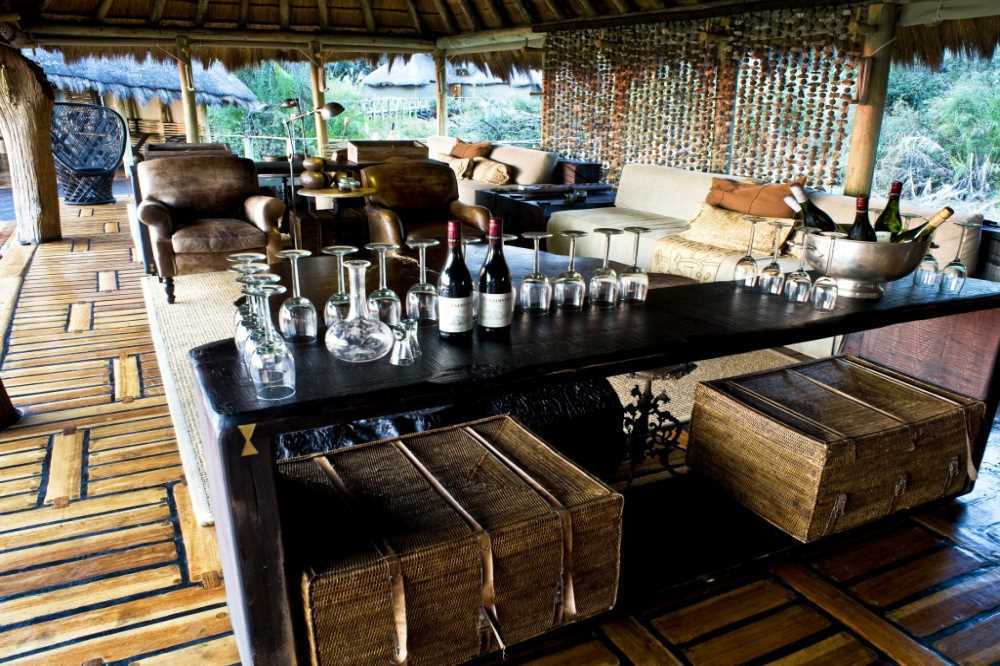 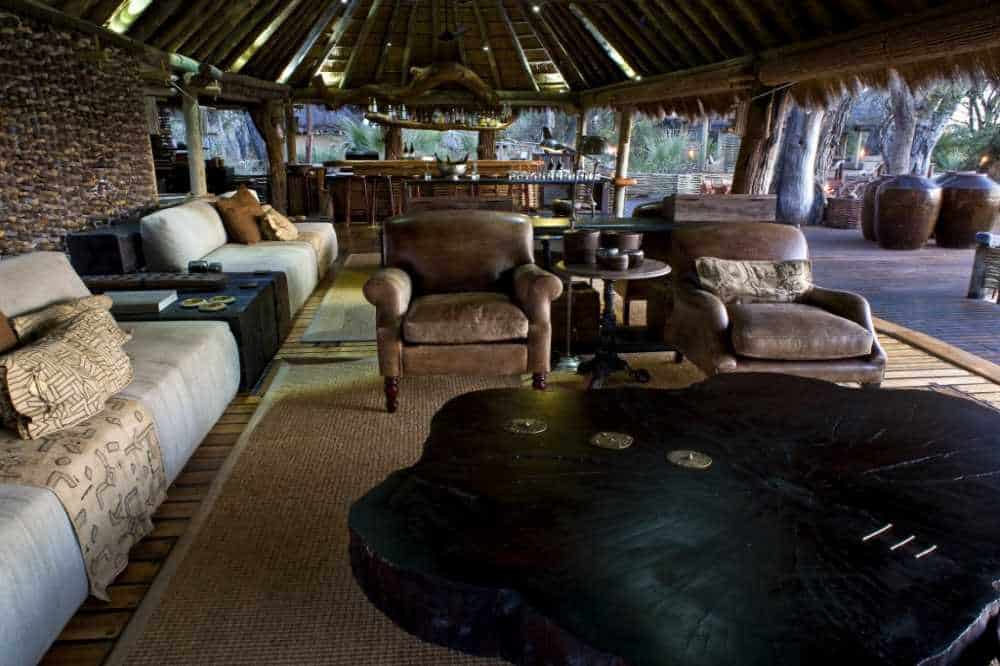 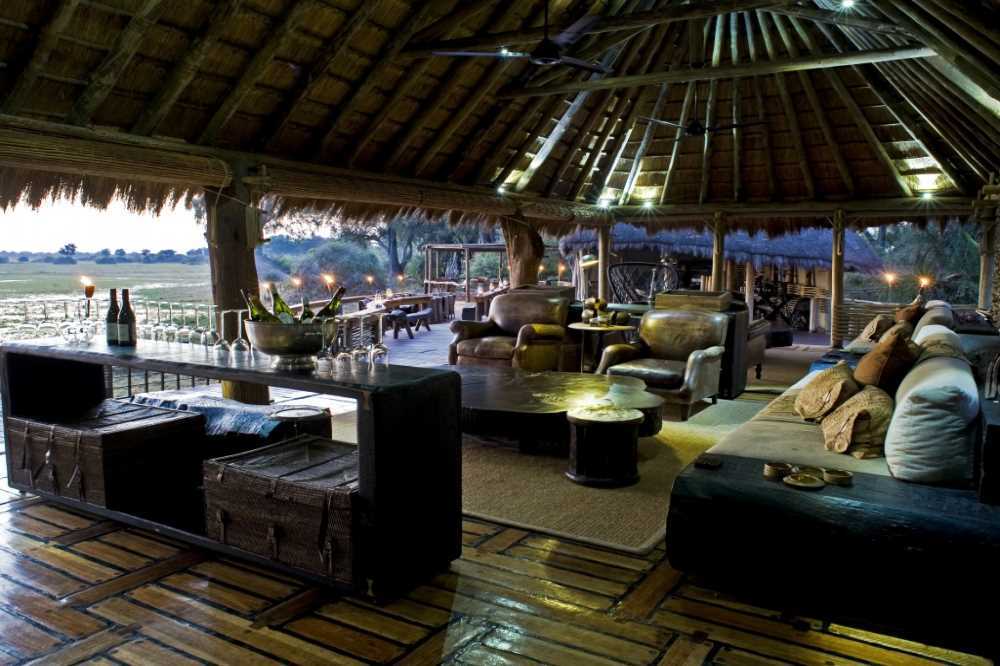 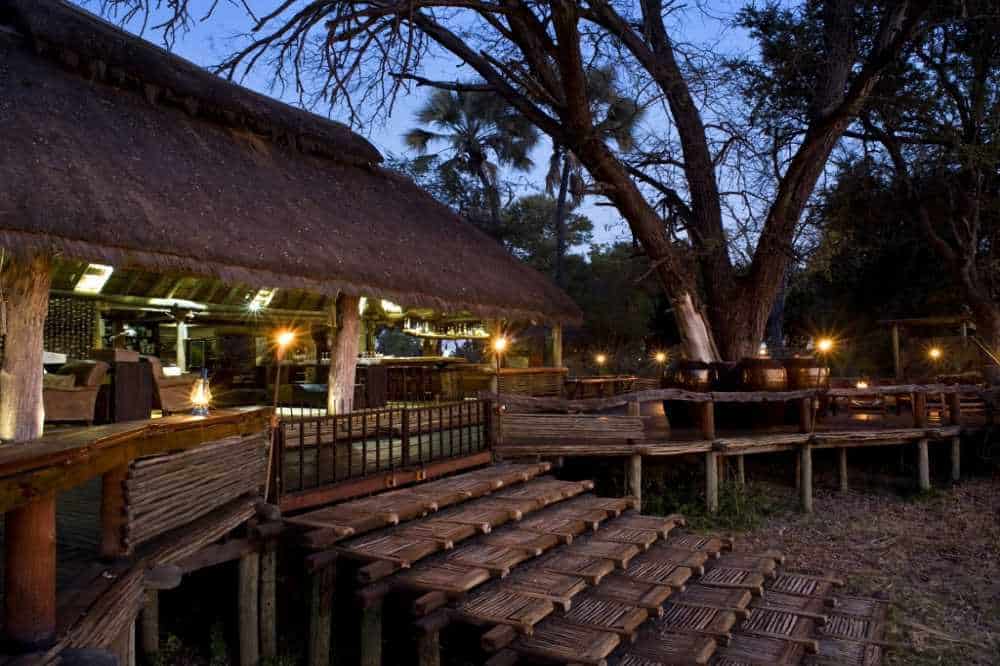 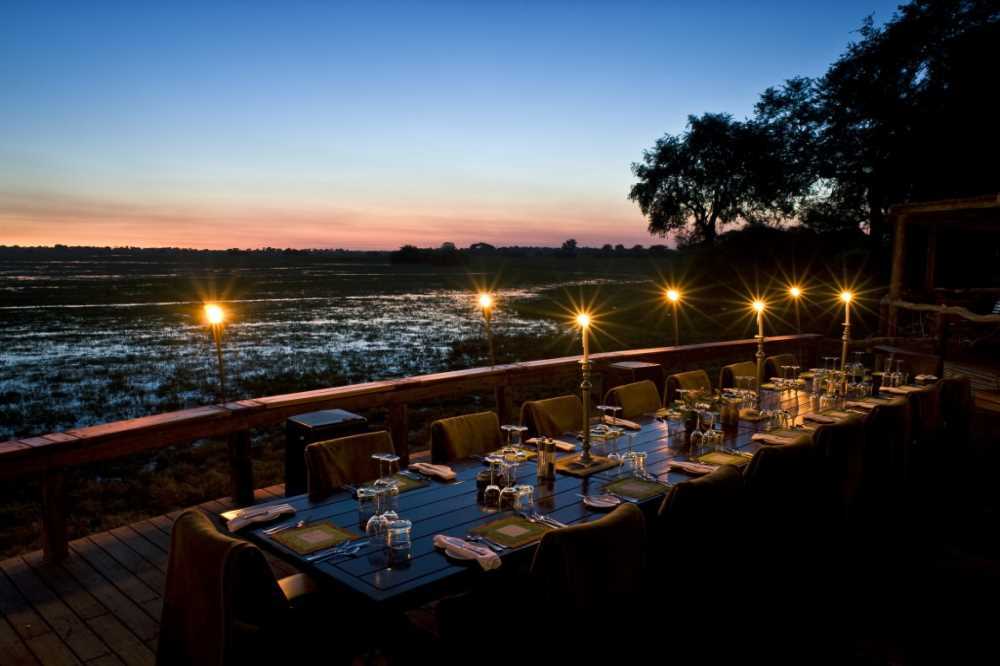 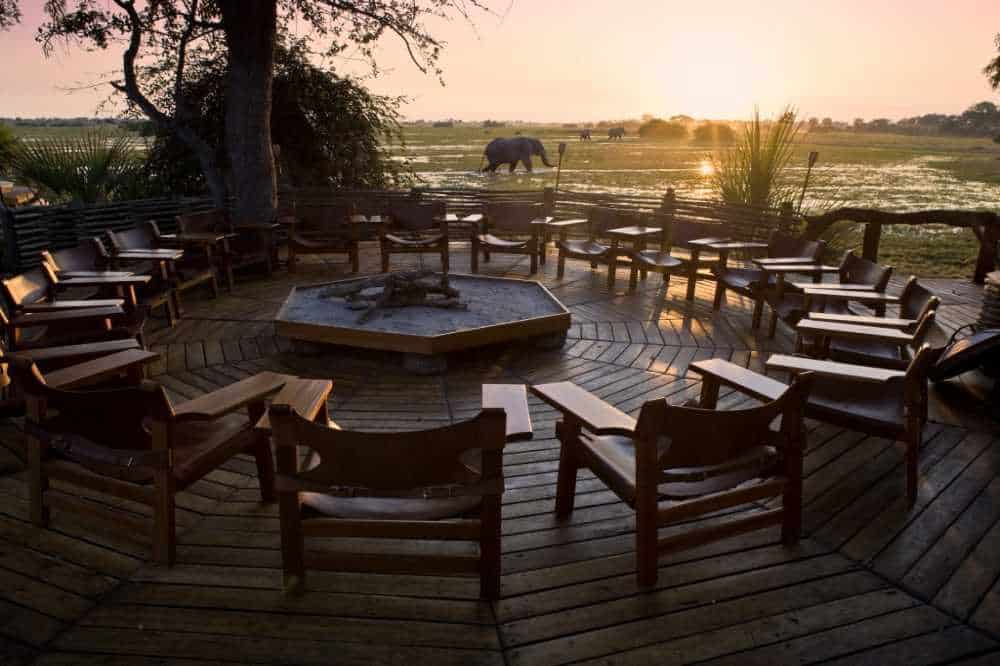 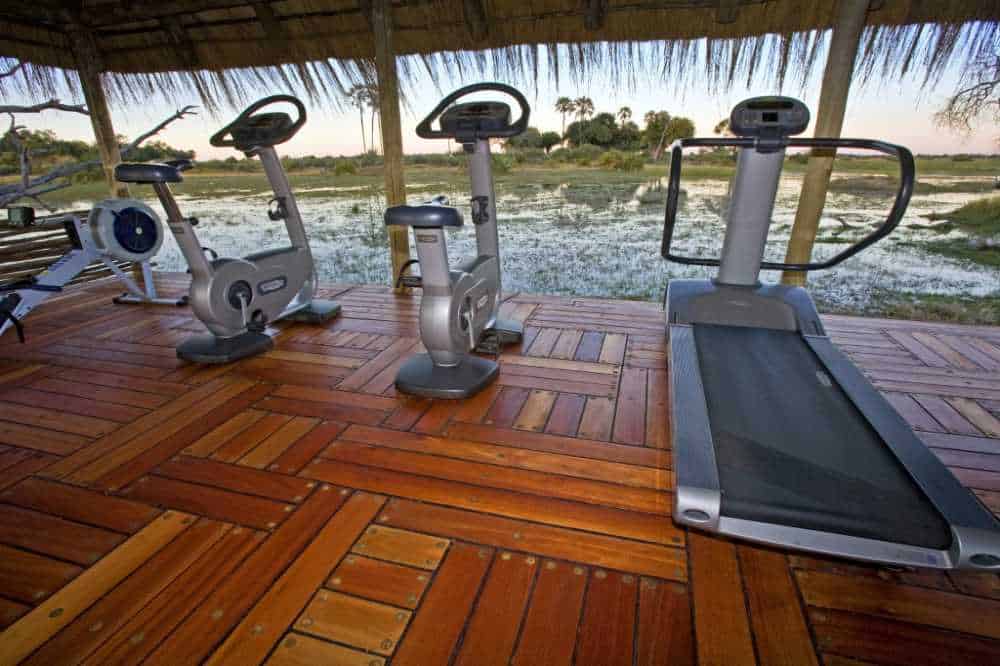 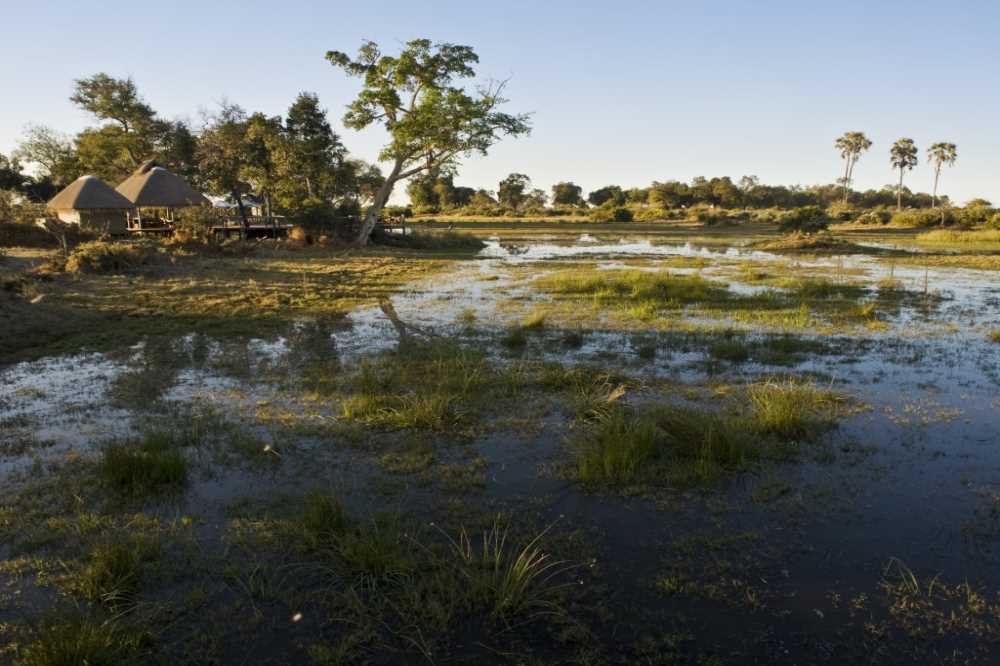 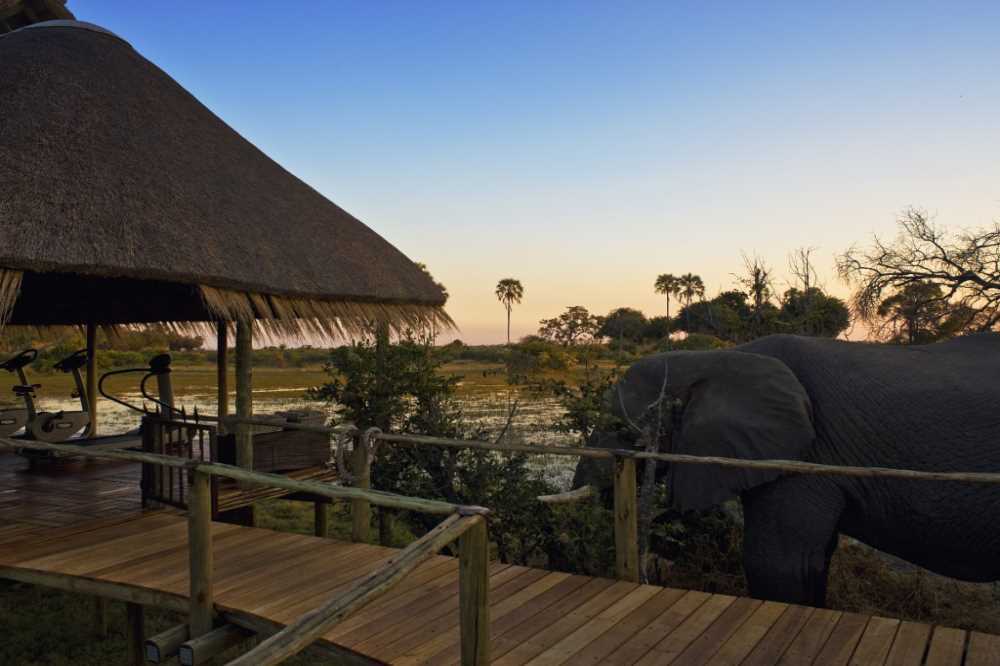 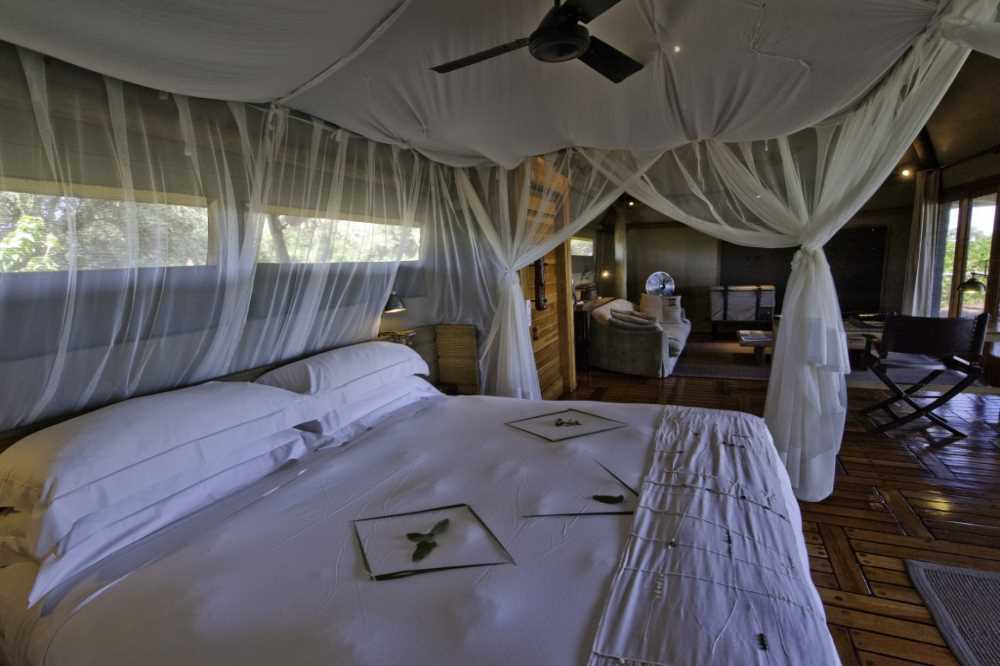 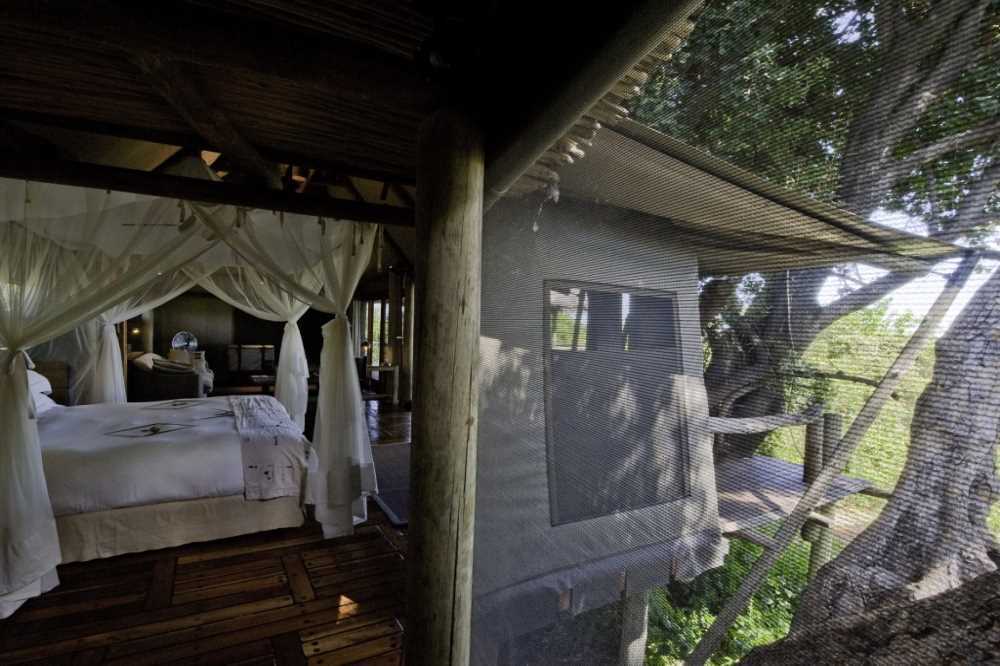 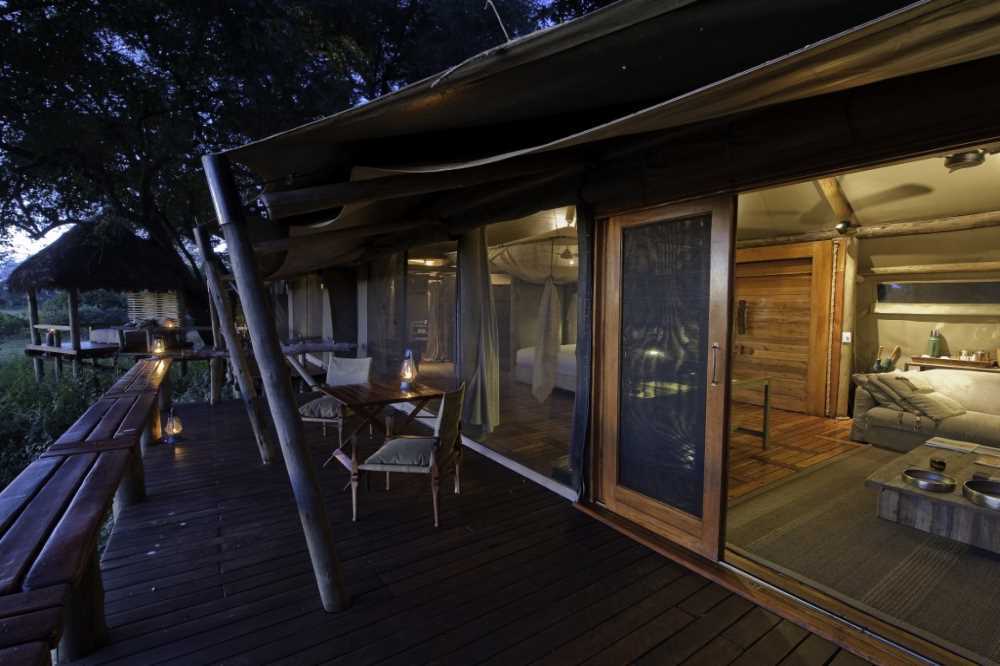 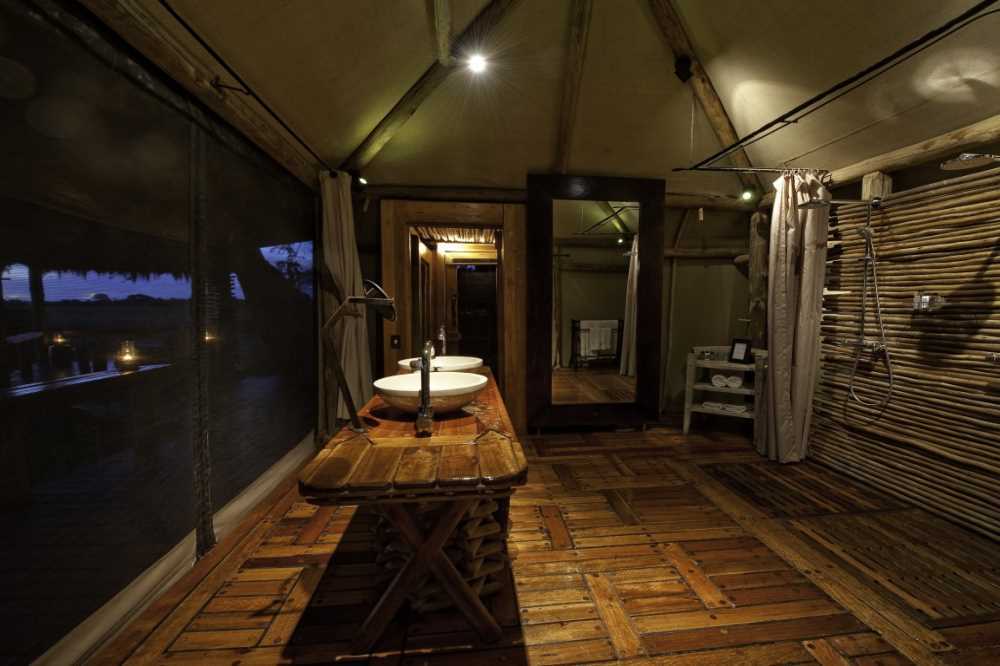 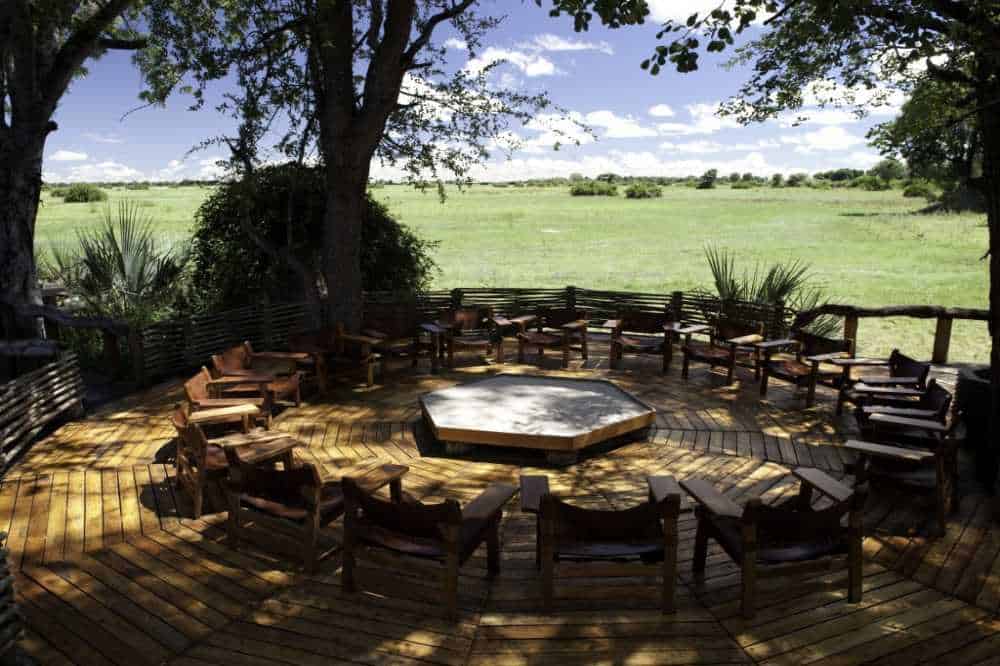 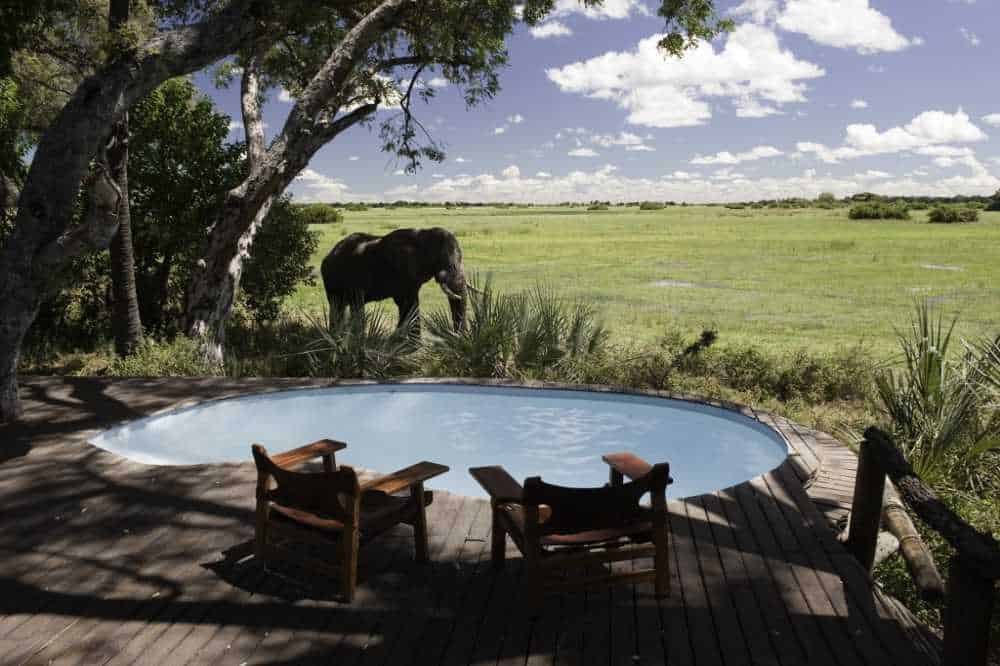 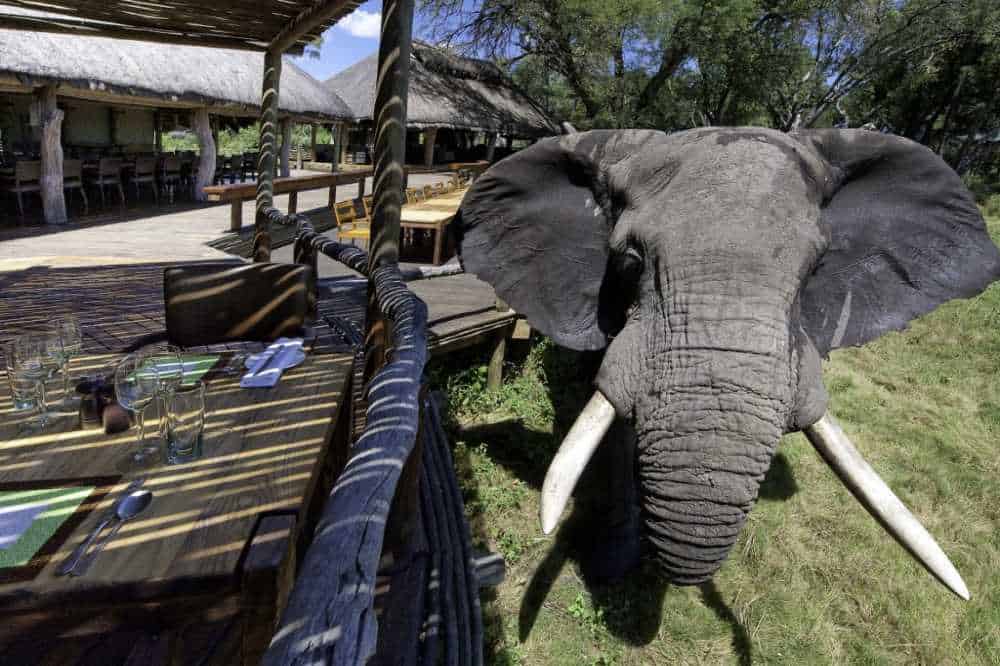 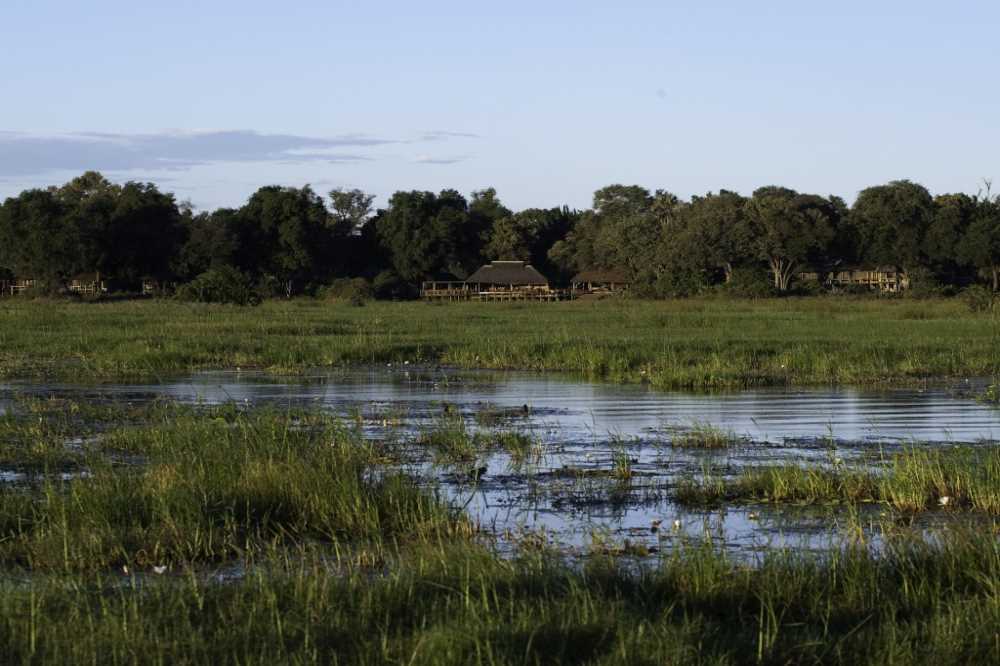 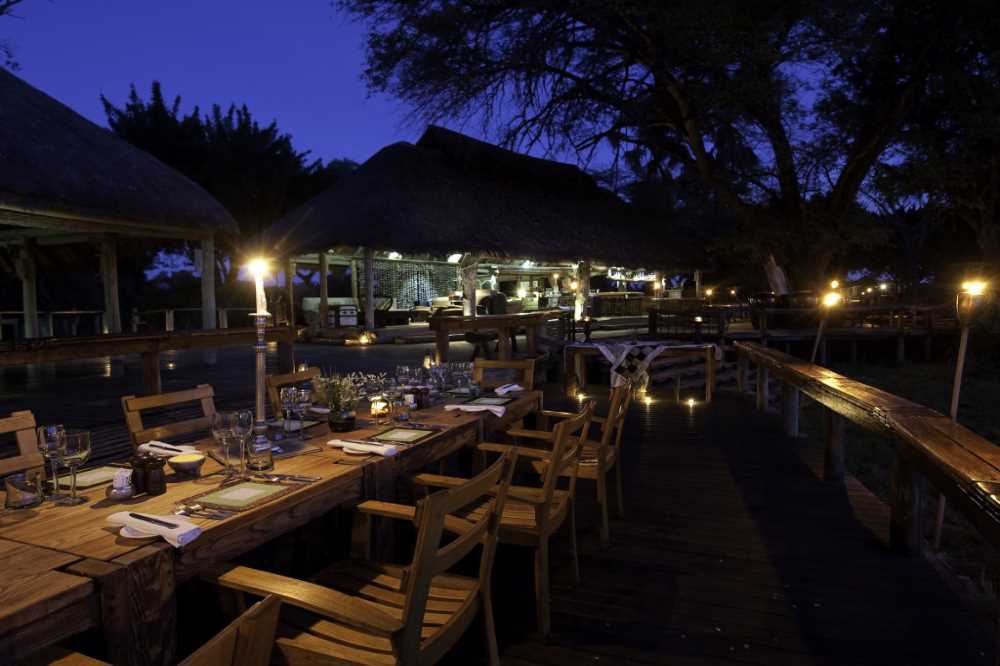 Mombo Camp is built under large shady trees overlooking a large floodplain which is teeming with wildlife. The Camp consists of nine large luxury tents with en-suite bathrooms and both indoor and outdoor showers and are raised two metres off the ground. The tents each have a sala, a large deck and longe area.

The main living and dining areas built under thatch with a boma where dinners are held under the star-lit sky. A plunge pool is also available for cooling off during the day.

Facts: Type – 100% Game drives. No water activities although guests will see water in the area at times.

Little Mombo Camp is situated on Mombo Island, adjoining the northern tip of Chief’s Island within the Moremi Game Reserve in the Okavango Delta, northern Botswana. It is a smaller and more intimate camp than its sister camp, to which it is connected via a raised walkway.

Little Mombo Camp is built under a shady canopy and has three luxurious, spacious rooms under canvas with en-suite bathrooms and outdoor showers for guests looking to get closer to nature. Much of Little Mombo overlooks the surrounding floodplains which offer some of the best big game viewing in the Okavango Delta. A sala, large veranda and lounge area provide ample place to relax and enjoy the view. Little Mombo Camp also has its own dining room, kitchen and pool.

Larger groups are welcome to book additional rooms at the Main Camp.

Facts: Type – 100% Game Drives (although guests do see water in the area)

•Game drives via 1 x 10-seater open Land Rover for six guests (vehicle is equipped with a tree book, a bird book, a mammal book, a pair of binoculars and insect repellent in a centre consol on each rowlittle-mo of seats) •Game drives on Chief’s Island and surrounding area •Best game viewing in Botswana •Night drives not possible at present •Private vehicle on request (maximum five vehicles in the concession with three primarily being used at Mombo main camp, one at Little Mombo and one available for private vehicle booking)

The Camps are located in a drier region of the Okavango Delta which is quite unlike the water-inundated areas elsewhere. Habitats here vary from secluded island sanctuaries with papyrus fringed channels to low sandy islands and dry grasslands where the vegetation and wildlife flourish. Here the larger mammals move in their numbers – offering some of the best big game viewing in Africa.

These Camps are more familiar to those who dream of the Africa of wildlife documentaries with open grassland plains dotted with acacia trees and thickets. Ancient floodplains, long since dried up, form permanent savannah divided by swathes of dense mopane and acacia woodland. Raised, tree-covered islands ranging from a single termite mound to large landmasses are common. Trees such as real fan palms, sycamore figs, jackalberry and mangosteen characterise these island communities separated by open grassland and fragrant wild sage.

The Camps are situated on Mombo Island, an extension of the north-western end of Chief’s Island which effectively splits the Okavango Delta into east and west. The whole of Chief’s Island fall within the Moremi Game Reserve. This zone is also marked for low intensity safari usage, making both Camps incredibly exclusive and remote.

The sheer numbers and diversity of wildlife surrounding the Camps all year round ensure that every guest has a breathtaking big game viewing experience: from herds of buffalo to the diminutive steenbok (a pretty dwarf antelope), to elephant, white rhino, southern giraffe, impala, blue wildebeest and Burchell’s zebra. Lion and leopard are found here; and even smaller predators like serval and side-striped jackal are occasionally seen.

This abundance and variety of wildlife owes much to the positioning on the ecotone between east and west Okavango Delta. To the east lies the ancient Kalahari sands and grassland vegetation, and to the west lies the more modern, water-borne sediments and vegetation of the Okavango fan. The annual cycle of flooding also allows large numbers of wildlife to utilise both habitats to the maximum.

Between March and May, when the waters come, large mammals are able to move into the Chief’s Island area, which contains rich resources of grass and Acacia woodland. The wetlands are fringed by large hardwood trees, containing shade, cover, nesting areas, and food, for a wide variety of mammals and birds. By September and October the waters have started to recede and leave behind vast floodplains of short, green grass when the islands are now at their driest. This is the secret to the amazing diversity and quantity of wildlife in the Mombo region.

Birdlife is prolific with waterfowl like African Jacana, Pygmy-Geese, massive Goliath Heron and migrant waders in summer being particularly common.

It is no surprise that this richness and diversity of habitats, wildlife and birdlife is legendary amongst the tribal huntsmen of the 19th and 20th centuries. It was by their efforts to protect this legacy that the Moremi Game Reserve was established.