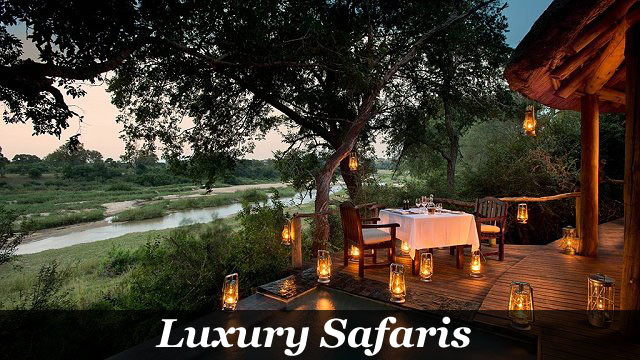 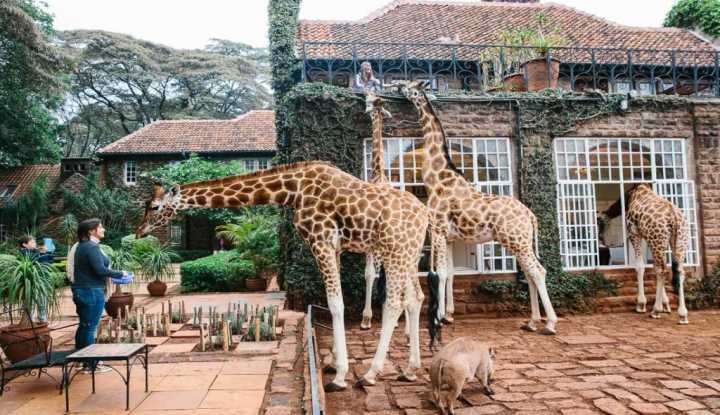 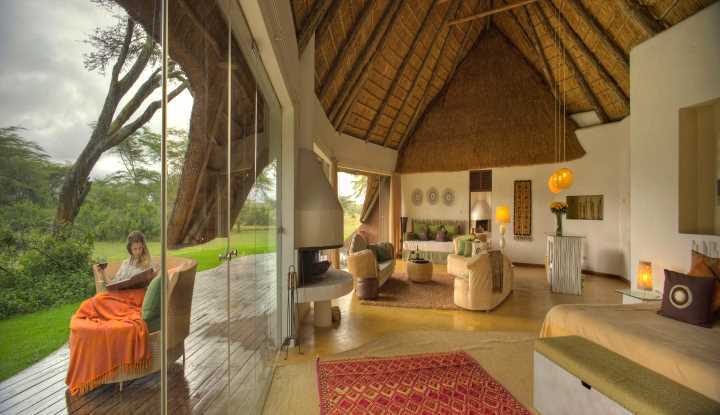 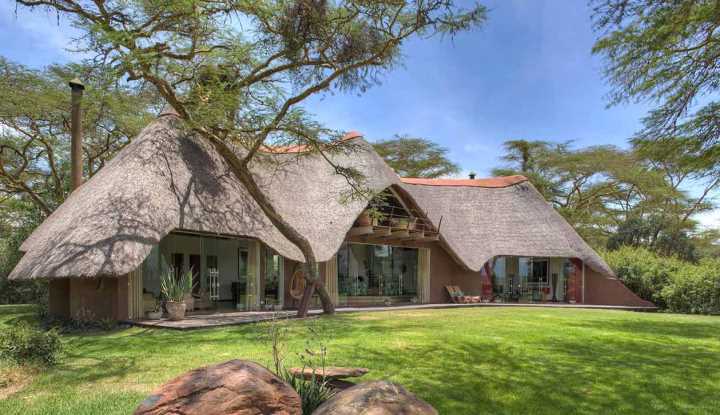 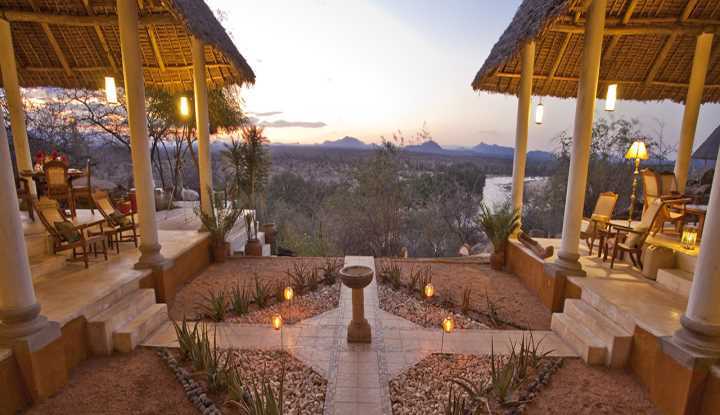 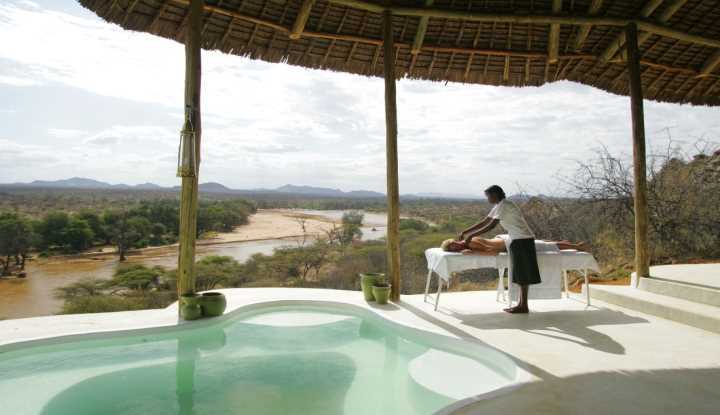 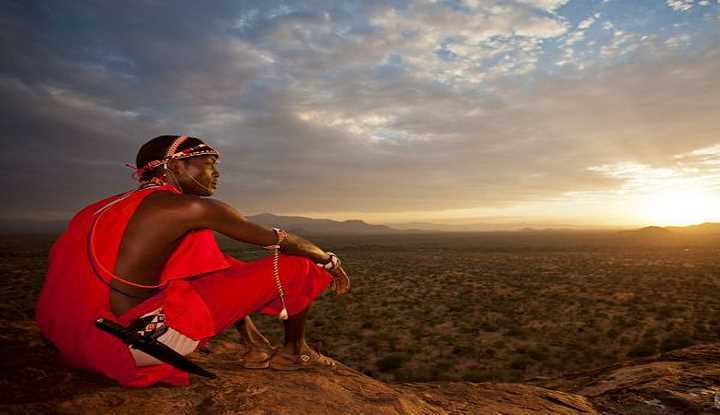 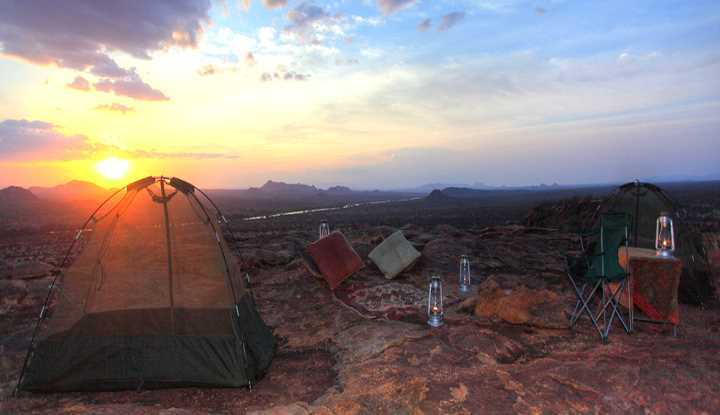 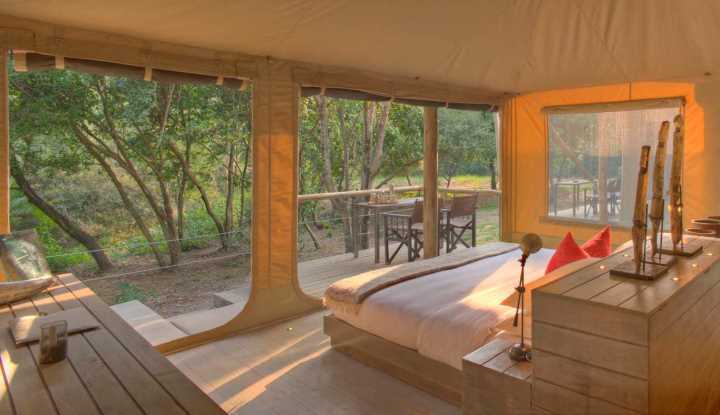 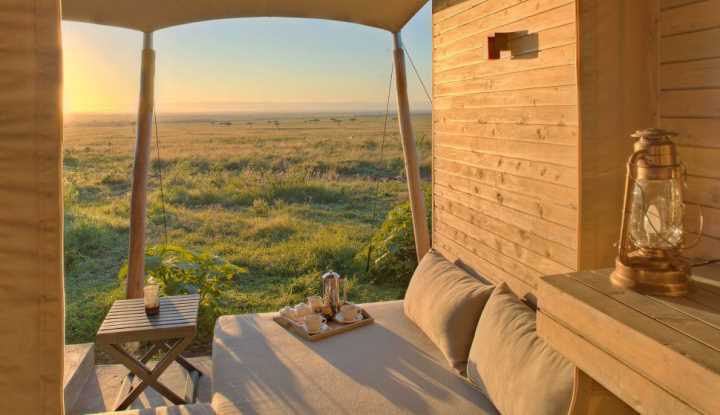 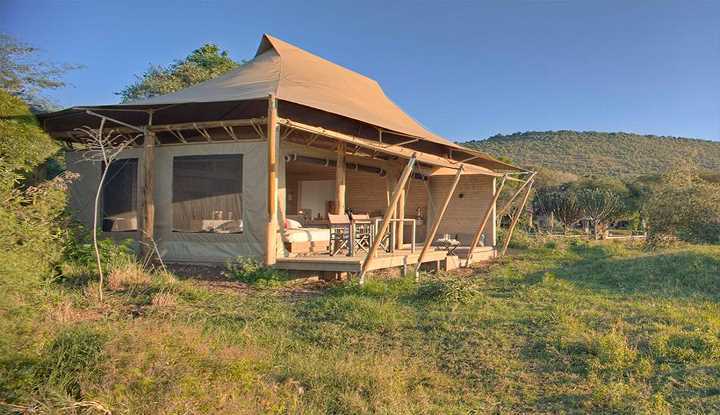 Created especially for wildlife enthusiasts and lovers of the outdoors, this exceptional adventure touches on at Kenya’s most scenic wildlife areas. Delve deeper into the African bush on the wide open plains of the Laikipia Plateau with an adventure that breaks away from the traditional, such as a camel or horseback safari. Enjoy picturesque landscapes filled with rolling hills where crimson-clad Samburu and Maasai warriors tend their herds among vast numbers of resident wildlife. Travel to the home of classic safari and explore the best known landscapes of Kenya in the Masai Mara, renowned as the home of one of the world’s most spectacular natural phenomena, the Great Migration.

DAY 1
On arrival at Jomo Kenyatta International Airport you will be warmly welcomed by an andBeyond representative, who will drive you into vibrant Nairobi.
Kenya’s capital is one of the largest and most influential cities in Africa, an important commercial and financial hub. It is the port of entry for most travellers to Kenya and offers bustling markets, interesting history and numerous attractions. Named after a Maasai watering hole, “enkare nyarobi”, which means “place of cool waters”, Nairobi is known for its leafy streets and parks. The skyline, with towering skyscrapers and imposing architecture also draws one’s attention soon after arriving in the city. Not-to-be-missed are visits to the city’s beautiful Uhuru Park and an informative excursion to the Karen Blixen Museum.

OPTION 1
Spend the night in a Superior room at Giraffe Manor. Your stay includes all meals, house wines, house soft drinks, house beers, house spirits, laundry, wireless internet access and a private tour of the AFEW Giraffe Centre. Transportation around the Karen & Langata area (within the check-in and check-out times) and airport transfers.

OPTION 2
Spend the night in a Superior room at Hemingsway Nairobi. Your stay includes dinner, breakfast, WIFI, use of gym, unlimited mineral water in room and airport transfers.

WHILE YOU’RE HERE…
Adopt an elephant: On a heart-warming visit to the Daphne Sheldrick Elephant Orphanage you can witness the heroic efforts of the dedicated team that rehabilitates orphaned elephant calves and other vulnerable animals. The program depends heavily on a fostering program, so choose a baby to support and become a part of its journey back into the wild by becoming its foster parent.

DAY 2
OPTION 1: SOLIO
After a delicious breakfast you will be driven to Wilson Airport for your complimentary scheduled flight to Solio, usually via Nanyuki. On arrival you will be met and transferred to Solio Lodge.

Lying on the edge of Kenya’s Northern Frontier, the Laikipia Plateau stretches from the slopes of snow-capped Mount Kenya to the rim of the Great Rift Valley. Laikipia boasts one of the largest elephant populations in East Africa and is one of the last strongholds of the endangered black rhino. Despite its scattered mosaic of farms and cattle ranches, it is essentially still a wilderness and a safari refuge supporting huge numbers of game. Two rivers, the Ewaso Ng’iro and Ewasa Narok, run through the area, attracting a rich variety of wildlife. Vast open plains in the shadow of Mount Kenya create a tranquil and secluded setting. A wild and romantic haven, Laikipia shelters not only the Big Five but a variety of rare and endangered species, including African wild dog, Grevy’s zebra and the semiaquatic sitatunga antelope.

Spend 3 nights enjoying the vast array of safari experiences and the idyllic setting of Solio Ranch, one of Kenya’s top conservancies and rhino sanctuaries. There is a sweeping selection of activities included in your stay.

Night and day game drives offer a chance to see many species, including black and white rhino, leopard, lion, cheetah, buffalo, zebra, giraffe and warthog, all from the unique rooftop seats of your private custom–built 4×4 vehicle.

Step out of the vehicle and immerse yourself in the sounds and sights of the bush on guided walks.

Imagine yourselves as Robert Redford and Meryl Streep riding off on safari as you step into the saddle and enjoy a leisurely horse ride around the ranching portion of the conservancy. Well worth the additional cost.

The clear air and majestic scenery are the perfect backdrop for an active morning spent mountain biking in the safe ranch areas of the conservancy.

WHILE YOU’RE HERE…
As the sun chases the cool of the Laikipia night from the plains, awaken to a friendly call of “Jambo!” from outside your room and find a pot of steaming, fragrant coffee waiting on your veranda. Listen to the quiet swish of long grass against your trousers as the expert walking safari guide leads you through the fragile silence of the waking wilderness. Tuck into a delicious late breakfast and plan the day ahead. If you wish, book a scenic flight – you can buckle up and let the powerful rotors of a helicopter Sweep you along the picturesque slopes of Mount Kenya for a picnic lunch up high. Our team will gladly provide rates and availability.

OPTION 2: SASAAB
Head further north, over the arid plains of central Kenya to the sweeping wilderness of Samburu. Your will depart Giraffe Manor or Hemingsway Nairobi for Wilson airport and board your complimentary scheduled flight to Samburu. On arrival, you will be met and transferred to Sasaab.

Situated on the banks of the Ewaso Ngíro River, with its palm groves and dense forests, the Samburu National Reserve offers pristine wilderness and breathtaking surrounds. One of Kenya’s lesser-visited safari regions, this reserve promises exceptional game viewing in remote splendour. Sasaab Camp is situated above the banks of the Uaso Nyiro River, in the arid heart of Samburu land. It’s a tranquil retreat that boasts sweeping views across the Laikipia Plateau towards Mount Kenya. The Moroccan style of the unique cottages lends itself to days spent enjoying the views and the breeze. Set on a pristine conservancy, Sasaab boasts an exceptional range of things to do, from walking with the Samburu to a romantic sundowner high above the sweeping plains. If you feel adventurous, try flycamping on Sundowner Rock, with nothing but a sky awash with stars as your roof.

Unwind for 3 nights in a room at Sasaab. This isolated haven is special in many ways and offers a wide selection of safari experiences.

With its own resident game and the striking landscapes of the Samburu National Park nearby, game drives at Sasaab boast fantastic variety in both scenery and game viewing. Look out for the Samburu Five – gerenuk, Somali ostrich, reticulated giraffe, Beisa oryx and Grevy’s zebra.

With its dry climate and deep tranquillity, Sasaab is the perfect place to unwind with a soothing day in the spa, aptly named SpaSaab.

The original and still the best way to engage all your senses with the natural world, a guided safari walk brings all the wonder of the African bush home.

Perch easily high on their backs of tall and stately Samburu camels, swaying with the gentle motion of their long strides during a leisurely camel walk.

Take to the wild and spend a night with nothing but a mosquito net between you and a sweeping ocean of stars on a fly camping excursion out on the conservancy. Our team will gladly assist with rates and availability.

WHILE YOU’RE HERE…
Try out your guidebook Swahili and feel the delight of your guides as they grin and offer gentle corrections. Take a privately guided walk through a Samburu village and touch a culture that has remained intact for hundreds of years – everyone is from around here and loves introducing their guests to their ancient way of life. Enjoy leisurely private game drives through the unique Samburu National Park or clamber aboard a patient camel and see the conservancy from an entirely different viewpoint. Connect with the hands-on ethos of Sasaab as you roam the pristine wilderness of the conservancy on a guided morning walk, then kick off your shoes for some riverbank football fun with the athletic Samburu guides. Bid the sun farewell from a scenic spot with an icy drink in hand. Dine out under the stars and perhaps opt to sleep out in a private lightweight camp with nothing but the African night above and around you.

DAY 5
Enjoy a leisurely breakfast at the lodge before heading to the airstrip. Your complimentary scheduled flight waits to wing you onward to the iconic Masai Mara.

The Masai Mara is Kenya’s most renowned game park, situated in the northern borders of the Serengeti. Its legendary Great Migration of over two million wildebeest and other antelope has been described as one of nature’s greatest wildlife spectacles and an experience every safari enthusiast should witness at least once in their lifetime. Game viewing in this celebrated park is wonderful throughout the year, with virtually guaranteed sightings of the Big Five. The park takes its name from the Mara River, which flows through the reserve, and the Maasai people, a tribe whose red dress and proud demeanour have ensured they are probably Kenya’s best-known (and most-photographed) people.

During winter (June to September) and the migration months, the Mara becomes very busy and wildlife sightings become quite active, with vehicles gathering for a lion kill or potential river crossings. During the quieter summer months and the green season (when there are heavy rains, particularly between March and June), the reserve is much quieter and visitors feel as though they have the Mara to themselves. Although the big herds of the Great Migration have moved off by this time, the abundant resident game can still be seen and wildlife sightings still rival anywhere in the world.

This private section of the Mara is home to a variety of exceptional experiences, from an early morning balloon safari to a tranquil walk along the Oloololo escarpment, famously captured in Out of Africa. Follow the sweeping beam of the spotlight on a thrilling night drive or spend the day enjoying a lazy breakfast and an indulgent spa treatment or couple’s massage on the banks of the Mara River. Our team will gladly assist with rates and availability.

WHILE YOU’RE HERE…
Explore the plains of the famed Mara, dotted with iconic umbrella thorn trees and watched over by tall Maasai in their distinctive red clothing. Perch comfortably on the high seat of the 4×4 as the guide interprets each sighting of the abundant resident game. Gape in astonishment at the endless, seething herds of the Great Migration and feel your pulse race during the madcap rush of a river crossing or enjoy tranquil encounters with year-round resident wildlife. Spend endless happy hours trying to fit it all into a photograph.

Follow an expert walking guide and listen as your footsteps rustle softly through the grass. Mumble a polite “Jambo” and shake hands with a beaming Maasai moran before he shows you around his village. Examine the exquisite craftsmanship of a beaded necklace that is simply perfect to take home. Savour the thrill of a unique night-drive sighting, framed in the glowing beam of the spotlight. Rise before the sun and then rise to meet it with the silent, effortless ascent of a hot-air balloon. Watch as the dawn turns the plains to gold and the expert pilot drifts the balloon smoothly over inquisitive wildlife and winding watercourses. Lift your face to the last rays of the setting sun, feel the warmth of the cooling engine at your back and sip a refreshing sundowner as the sun sets on another full day on safari in Africa.